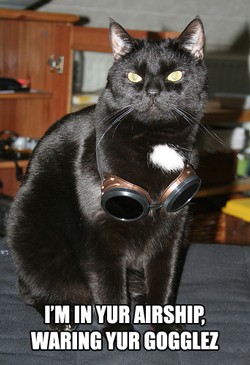 When I think of steampunk, I envision Victorian fashion, airships, and oversized rivets. And lest we forget-‘Captain Nemo’s elegant submarine, too. It’s a heck of a lot more than that, of course, but the elements that tend to leave a lasting impression in people’s minds is the brass goggle-icious visuals.

But what is steampunk, exactly?

Steampunk as a literary genre gained notice starting in the 1980s. A subgenre of science fiction and fantasy, it developed as a rebellious response to the science fiction that preceded it. Core elements of steampunk include: 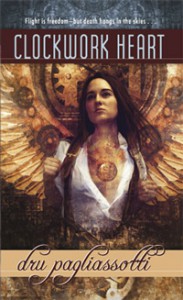 In fact, the concept of inventions that debut far ahead of schedule represents one of the most fascinating aspects of the genre. Yet steampunk science is far from cold, modern, and sterile. It’s warm, flashy, and larger than life. New collides with old to the point that the inventions are characters in and of themselves.

In Jess Nevins’ introduction to STEAMPUNK, an anthology edited by Ann and Jeff Vandermeer, he points out that there is often conflation between an Edisonade type story, with its reputation for action/adventure and stylish trappings such as brass goggles, airships, and automatons, and steampunk, which can also include those elements. However, a core difference is that steampunk is "an argument with the science fiction of previous generations" (p.8, "The 19th-Century Roots of Steampunk.").

Regardless, all of those aspects have their appeal. Steampunk offers many fascinating and thought provoking stories. But there’s something it’s been missing all these years. While steampunk has a very "romantic" feel-‘mainly because of the aesthetics-‘most of the stories have lacked any kind of actual romance.

Steampunk romance is a subgenre that’s ripe for exploring. I’m surprised it hasn’t happened before now to any great degree. While steampunk-as-argument generally explores many dark themes in the science fiction arena, it’s the Edisonade components of the genre that have the most potential to bear succulent fruit when paired with romance.

Here are a few reasons why:

A major appeal is the historical settings. How many romance readers have cut their literary teeth on historical romances? Steampunk romance is a natural extension of those. We’re not limited to Victorian era England, either. The American Old West alone (BACK TO THE FUTURE III, anyone?) has loads of potential. Think automaton horses and heroes wielding steam powered rifles! With the right inventions, characters could even venture to the Moon! 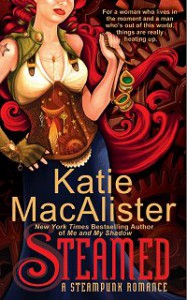 stylistic elements. Let’s face it, Victorian fashion may have been stiff and uncomfortable, but it sure looks amazing. I think it would look even more amazing if the characters were solving mysteries using analog computers or falling in love while sailing through the clouds aboard mighty airships. Brass goggles are the new black!

Flexibility of worldbuilding is another reason to cast an eye toward steampunk romance. It’s entirely possible to have a compelling love story that includes just a single steampunk element (because yeah, while goggles and automatons are exciting, let’s not overdo it, eh?). I’m chomping at the bit to discover what kinds of heroes and heroines would arise from steampunk romances, and how a relationship would be defined by this kind of world. Personally, I have a thing for sexy inventors.

Steampunk Romance on the horizon

Steampunk romance has the potential to offer something familiar, yet different. Authors can stretch their creative wings. Readers gain variety and a hint of the exotic grounded in the familiar. Publishers laugh all the way to the bank. Win-win-win.

Steampunk romance is barely a subgenre currently, but I’d like to think that’s about to change. Right now, you can read CLOCKWORK HEART by Dru Pagliassotti; THE LEAGUE OF EXTRAORDINARY GENTLEMEN by Alan Moore, THE DEMON’S DAUGHTER by Emma Holly, and NEW BLOOD by Gail Dayton.

There are a few books on the horizon that will pair steampunk with romance:   Meljean Brook’s THE IRON DUKE, Liz Maverick’s CRIMSON & STEAM, Gail Carriger’s SOULLESS, Katie Macalister’s STEAMED, and Zoe Archer’s THE BLADES OF THE ROSE: WARRIOR. I can also envision scads of titles coming from the digital sector.

Erotica romances have been ahead of the curve for quite a while now, for example, Nathalie Gray’s novella MECHANICAL ROSE and Circlet Press’ LIKE A WISP OF STEAM anthology. Liane Gentry Skye’s Wicked Redemption will close out Red Sage Publishing’s THREE KINDS OF WICKED anthology next summer. In September, EC’s ELLORA’S CAVEMEN anthology will include the story Cherry Tart.

In the GLBT arena, Ginn Hale’s WICKED GENTLEMEN and Angelia Sparrow’s short Meanwhile, Back At The Ranch are currently available.

If you’re looking to submit your steampunk romance, Anne Sowards of Ace/Rock and Angela James of Quartet Press are actively looking. Recently, Lyrical Press put out a call for steampunk (both romance and erotica). So polish up that steampunk beauty and send "er out!

Now I’ll turn the brass wireless mic over to you. Thoughts on the genre-? Have any recommendations to share? What kinds of stories would you like to see?