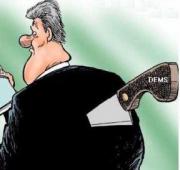 I have a hard time quitting you. Even when your series goes south, I still keep buying. But right now, as of today, I am not going to be suckered out of my hard earned money. I am going to try to preserve my good memories and not buy that one next book. In the law, there is a golden rule in cross examination. You should never ask the one question too many. It's something you just to have a feel for. I am learning that skill with books, just like I did with the law. It's taken me several years and several bad turns in series to get me to this point, but I think I have finally got it. Ms. Harris, I am going to start with you. I read the reviews at Amazon.com and, oh, I know that perhaps they reveal too much of the plot and the story, but I am happy for it. It's helping me be strong.

You see, Ms. Harris, you just don't have a very long rope with me. When you killed off the husband of one of your heroines for no good reason other than because you could, you lost me. I didn't buy the next Roe Teagarden mystery even after having slavishly followed her for years. I hesitated for a long time in buying Dead After Dark because of your past but I did and I was glad that I did. I liked Bill and Sookie but I held back. You had this reputation and I didn't want to get too attached. I was glad that I hadn't fallen for Bill. I lived through the demonization of Bill in Book 3 of the Sookie Stackhouse series. I learned to like Eric, Alcide, and Sam. Now, it's time to quit you. Apparently you are doing more terrible stuff to Bill. Sookie has a new flavor of the month, Quinn. And she has gained a special new power: fairyness. It's over. I am going to remember the good times we had in the past and I am not going to sully those memories with any new books.

I know that you have the power to make us love characters and hate characters. To weep with them and exult with them. To long for them. But a reader's affections are not something with which you should toy lightly. We have long memories and we will hold it against you. Don't kill off a character just for the thrills of it (Sandra Brown). Don't take a character down a path that doesn't make any sense (Ms. Hamilton). Don't ruin our memories of a great love fought for and won (Megan McCafferty). Don't leave a genre that isn't selling well to write really terrible mysteries (Julie Garwood). Don't listen to Nike. Listen to me. Just Don't Do It.