Guest Op: Enter the Extraordinary Heroine: Are We Ready For Her Yet?

The extraordinary heroine exists in all subgenres of romance, but in my opinion, we could use more of them. When I think of an extraordinary romance heroine, I define her as having one or more of the following characteristics:

* possesses power, wealth, and influence as defined by the story setting

* intelligence (i.e., she's in no danger of being Too Stupid To Live)

Occasionally, extraordinary heroines share the traits of the "unlikeable heroine" that Janet blogged about here back in March 2010. You may know of more.

The reason I have extraordinary heroines on the brain at the moment is a particular comment I read in response to a recent blog post by Mrs. Giggles:

"I am so TIRED of books that promise a strong heroine but delivers a quivering bunny!" 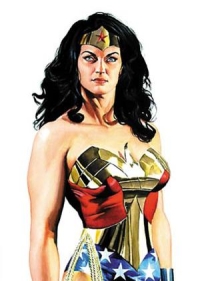 That comment resonated with me because I recently started a science fiction romance in which that happened. The heroine was presented as strong and extraordinary, but then the story proceeded to undermine her special abilities in mind boggling ways: she went from ruthless space pirate to virgin artist in the space of two nanoseconds. This was a book from 1996 (Cinnamon Burke's LADY ROGUE if you must know), but still-‘why give her extraordinary capabilities and then downplay them? Plus, the extraordinary aspects were told rather than shown. I can live with the telling if the author then supplies action to back it up, but that happens less often than I would like, regardless of when a book was released.

This tendency to promise an extraordinary heroine and then focus on anything but her extraordinary nature bothers me because I'm a big fan of these heroines. They fascinate me not only because of their special abilities but also because it taps into my own need for empowerment. I look up to extraordinary heroines who push gender boundaries and challenge stereotypes. The cooler they are, the harder my crush.

Thankfully, the current offerings in science fiction romance are more likely to meet my expectation of extraordinary heroines and feed my appetite for them. It's part of what makes the subgenre special for me. But I still feel like I'm missing out on more of them. Does this lack exist because the market is skewed towards certain tropes? To quote Lisa Paitz Spindler from the comment section of the Dear Author post My Paranormal Malaise,

Why is it the paranormal character is so often the hero and not the heroine?

Which makes me wonder (foreshadowing alert!): regardless of subgenre, are we really ready for more extraordinary heroines? Ones that stir as much excitement in us as the heroes do?

I think so. But the powers-at-be may disagree.

I can't help but think that there's a connection to the fact that a big-budget Wonder Woman film has never gone past the development stage. This iconic superhero has a flawed origin story, to be sure, but it's not necessarily any more flawed than Superman's.

In an article about this mystery in the November 26 issue of Entertainment Weekly, screenwriter Matthew Jennison is quoted as saying, "It's just much easier to sell a male action hero to the studios than a female one." Director Karyn Kusama (Aeon Flux) shared that studios are "-worried that boys won't go see it-And maybe even worried that girls won't go see it. Because the superhero concept really is a male thing."

Interestingly, Joss Whedon is quoted as saying "But I don't necessarily think we need a Wonder Woman movie per se. We need more female heroes. We need "wonder women' movies."

Hmm. Sounds like an entertaining idea, doubly so if one transports the idea of "wonder women" to romance heroines. So why don't we encounter them more often? And of the ones that exist, why are their abilities told rather than shown in some cases (at least compared to the extraordinary romance heroes who get plenty of on-stage action)? Are they not extraordinary enough? Heck, no, of course they are. But are they too extraordinary? Does their very existence threaten the concept of the fantasy male lover?

It's easy to market a fantasy male lover to a heterosexual female audience (hello, man titty covers and vampire romance!). Conversely, it's a challenge to market romance stories that feature a heroine in a role that has traditionally been reserved for the hero (hello, Wonder Woman!). Urban fantasy seems to have satisfied many readers' desire for extraordinary heroines, which is a worthy feat. And unlike Wonder Woman, there doesn't seem to be the concern about emasculating or overshadowing the hero (if the story has one). But urban fantasies don't always feature a romance or HEA.

Sometimes I suspect that even in the romance genre, there's a default assumption in operation that perpetuates the myth that an extraordinary heroine translates to an emasculated, less-than-desirable, and/or all too ordinary hero. Is that why such heroines are sometimes promised but then watered down as the story progresses?