Accumulation or: The Problem With Too Many Dukes 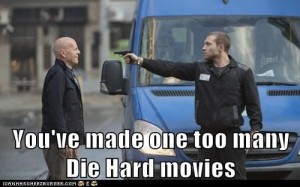 At our recent m/m roundtable, Sunita and I had a bit of a discussion in the comments about the Out for You and Gay for You tropes in m/m romance. That discussion and various others around the internetz got me thinking about Problems in Romance and the nature of them.

I’ve come to the conclusion that for the most part, the issue is not so much that a particular thing exists – it is more that there exists too much of it. That is, it is more the frequency of the thing which has a cumulative effect and that then becomes the problem.

Apparently in Regency England there were 27 real life dukes. (Earls were a lot more common).   (I think there must be at least one more now because William is Duke of Cambridge and I recall that title was newly created, but I stand to be corrected on that).   One historical romance story which is about one duke is not in itself a problem. Arguably, 27 stories (let’s be egalitarian and say they’re all from different authors but it probably doesn’t matter) featuring one duke would also not be a problem because the representation of dukes vis a vis the rest of the population was about right.   I haven’t done any empirical research but I expect that most historical romances don’t feature more than 27 dukes in any one book.   So, the representation in one example of a historical romance is probably not that big a problem.   That is to say, if one reader read one (or possibly up to 27) historical romance(s) featuring a duke she would probably not have a skewed version of reality (at least as it pertains to their number within the population).

But, as we all know, there are way more than 27 dukes in romance. A simple Amazon search on “duke” comes up with 29 pages of historical romances – and that is just the tip of the iceberg.

And I don’t think manufacturing hundreds of dukes never hurts anyone. Basically we’ve turned Georgian and Victorian England into a romance amusement park. We’ve erased the politically active working class, we’ve made Chartists and Luddites and agricultural workers into comic relief and/or people to be saved by the aristocracy. Sure, none of them are alive now, but their descendants are.

I think it is the same in Gay for You and Out for You. There are real life versions of these stories. They’re nowhere near as common as the representation of either trope in m/m romance would suggest however.

I could go further. How about the Alpha hero? Or the Billionaire? Infidelity in New Adult? The problem, it seems to me, lies not in one book, or even a handful. But at some point (and I don’t know what that point is exactly), one more romance tips over into too many and the accumulation of them as a group becomes the problem.

There is another side effect. Some may say that any Alpha is one too many but I think that the bigger issue is not so much that there are books which contain them, but that there are so many of them, they can make discoverability of other books more difficult.

The first person who ever wrote the “sassy gay friend” probably based that on a real person. I’m sure in the population, at least one exists somewhere. But a stereotype becomes a stereotype because it is copied and copied and copied. And, all of a sudden, the “sassy gay friend” is seemingly everywhere and appears to make up a large proportion of gay representation. (There is also the issue of the stereotype becoming a kind of “shortcut” and therefore being only shallowly drawn – it is almost as if authors expect readers to “import” characterisation from numerous other books to round out what is missing in the story at hand. But that is an issue for another day).

It is all well and good to say that fiction is fiction and readers are savvy enough to know what is not real – but, are we really? Or, are we always? If I read a book set in Africa – a place I’ve never been and know little about, I’m likely to suck that information up like a sponge and assume it to be true. When I read a book set in our world, my default is to assume what it says about the world is true. Unless I know it is not or unless what is incorrect is pointed out to me, I would never know.

When I saw the movie The Duchess, I was taken aback by how apparently heartless and awful the Duke of Devonshire was. I think I knew that not all dukes were romance heroes but I had to have a bit of a conversation with myself about Ralph Fiennes’ performance and what must have seeped into my consciousness from so many books about dukes who love passionately and with fidelity, dukes who would never dream of merely bending their new wife over the marriage bed (sans foreplay and afterglow) and just sticking it in to get the job done. And The Duchess was still a fictionalised version of events; I haven’t forgotten that either. Even so, Ralph’s portrayal is likely much closer to the truth than what is in most romance novels. I hadn’t realised I had taken so much of the romance genre mythology in.

And there can be an insidious effect from the problem of too many. Perhaps it is that a large portion of the LGBTQ community is under-represented or worse, absent, from the romance genre. Perhaps it is that the romantic, emotionally compelling stories about people who are out and proud are pushed aside in favour of a trope like Gay for You. Perhaps it is more subtle – maybe it is that authors/publishers believe that a historical romance without a duke won’t sell, so we don’t get the stories we might love about the Chartists and Luddites. Or those stories that do exist are hidden behind 150 dukes and so are hard to find. Perhaps an author, looking at the proliferation of dukes thinks her Chartist book won’t sell and therefore writes a book about a duke which may not be as good as the one she really wanted to write.

The discussion is difficult when it comes down to a particular book though. Because ONE book about ONE duke isn’t, in itself, wrong, is it? And why should book 254 (say) be the book that makes things problematic? Where is the tipping point? What if the very first duke book a reader reads contains fictional duke number 1543? For that reader, it is her first duke. How does the individual reader who is exposed to very little of each individual “problematic thing” fit into all of this?

And who’s to say that the 1468th book about a duke won’t be an absolute cracker which brings something new and fresh to the genre? Should a queer person whose own lived experience is “Gay for You” not be able to write a fictional book based on that experience? Should the straight person who writes an Out for You book which deals with the challenges of coming out and the risks and pitfalls that might present to a relationship be not allowed to write that? Is the woman who is married to an Alpha Carer not allowed to write an Alpha hero? Because there are already too many? Do we ban billionaires? That doesn’t seem right either.

Perhaps the challenge for a reviewer is to judge the book on its own as well as within the wider context of genre. But even that is difficult. My own experience of Motorcycle Club romance represents about .003% of my personal reading library. I know there are many, many more MC books out there but I haven’t read them. So how do I judge the wider context?

In a general sense, I think it is okay to like problematic things. But I also think that those things should be talked about and critically examined.

So, this is me, talking about a problem of accumulation. I’ve no answers, only a lot of questions and thoughts – but it’s at least the beginning of a conversation.