Mingmei Yip, Author of  Petals from the Sky

Meng Ning's journey begins at the bottom of a well outside Hong Kong, where, while awaiting rescue, she does some pretty heavy thinking for a thirteen-year-old girl.   The experience leaves her with a desire to become a Buddhist nun, and years later, it seems that is to be her destined path.   But a rescue of another sort, and her rescuer, an American doctor, put a twist in that path.   Mingmei Yip wraps the familiar themes of love and self-discovery in a rich package of Chinese culture and Buddhist tradition.   You can make the journey, too-‘join us in the comments for a chance to win Petals from the Sky. 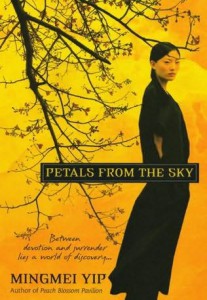 A six-word memoir for Meng Ning, your protagonist:

Petals from the Sky was inspired by my own life, especially from close friendships I formed   with   Buddhist nuns — both the mountain meditating and entering-the-world kinds. I was fortunate to experience Buddhism from the inside and wanted to share my experiences with English speaking readers. I discovered that most Americans have never heard of Buddhist nuns, only Catholic ones.

The eccentric, yet loving, mother and father in the novel are based on my parents, who, sadly, left this   life some years ago. Perhaps it is just as well they cannot read their dutiful daughter's book!

Your favorite line or moment in  Petals from the Sky:

"-.Traffic whizzed by.   Restless people and speeding cars kept passing through her in the glass. But Mother was fine.   for nothing can hurt a soul in a mirage.   As no one can steal the moon reflected on a river-"

Meng Ning had unexpectedly glimpsed her mother's reflection in a shop window in busy Nathan Road in Hong Kong. Meng Ning always fears her mother – often belligerent and always careless   -would get herself into trouble or hurt.

Meng Ning's mysterious friend Dai Nam is fascinating enough to carry a novel of her own.   Tell us more about how she became part of  Petals from the Sky.

In  Petals from the Sky, Dai Nam is a quiet, strange and mysterious nun with a big scar marring one side of   her somewhat delicate face. She painted her room black, practiced meticulous tea ceremony, and suffered both from being a nun and not being one. A complex woman, she was loosely based on one of my nun friends in Hong Kong.

There's a wonderful contrast of settings in the novel.

Petals from the Sky took place in Hong Kong, China, Manhattan and Paris, places where I'm very familiar with.

And yes, each setting has something to do with the protagonist Meng Ning's psyche. In Hong Kong, she had her mother's love but also her incessant nagging. She also had her nun-mentor's guidance and overwhelming influence. In Paris, she was by herself in an exotic place, but interacted with a mysterious nun. During a stay in China to document an ancient Buddhist site, she tried to work out her confusion about giving up her dream to be a nun to marry Michael, her new American boyfriend. Manhattan gave her something completely different – adventure, seduction, including her irrisistible attraction to a rich, gorgeous man other than her fiancé Michael — and heartbreak.

Meng Ning's mother made me laugh nearly every time she came on the scene, and of course, she has some surprises up her sleeve before the story comes to an end.   How are she and Meng Ning alike?

The character of Meng Ning's mother is in fact inspired by my own mother, who, unfortunately, is no long in this life. I love my mother dearly and the affection is mutual, although she was demanding and could be very difficult at times. That "surprise" toward the end is the way I wanted my mother's life to be – to have some fun in her difficult life married to a handsome man who cheated and gambled away everything.

To me, the strange thing about people is: no matter how different their background, tastes, thinking, these can always be softened by genuine love, such as that of Meng Ning and her mother.

Number of manuscripts you wrote before your first book,    Peach Blossom Pavilion sold:

Although I'm fairly acquainted with rituals through frequent visits to temples, I don't do rituals for writing – though I do perform mudras (sacred hand gestures) at musical performances.

I'm lucky because I can just sit down wherever I am, boot up my computer, and happily type away. I must have good karma from somewhere because I've almost never had writer's block.

I get ideas from dreams from time to time, so I always keep a pen with a light by my bed so I can jot down these fleeting images. Sometimes I write for hours on end; other times just for a few minutes. I   don't write on napkins, tissues, nor my precious calligraphy paper. I carry a small note book wherever I go.

Once in a while I'll ignore "Show, don't tell." For some parts it is just better to tell. After all, according to the Chinese yin-yang duality principle, it is natural to alternate between extremes, even "show" with   "tell."

I do follow other advice, including,   "conflict on every page" and "leave them hanging at the end of every chapter" I want my readers' eyes glued to the words and their hands clutching the book for dear life!

Lots of reading, not only fiction but philosophy, poetry, music, painting, arts. I also enjoy very much reading about politics, not policy issues but the conflict and revelations about human nature.

I was a professor of music in Hong Kong. Now I do some performances on my Chinese musical instruments and I do make some money from my writing.

I was not a great reader at ten. I was too busy making up stories in my head – and drawing and playing music. I read a lot of silly things then such as "Children's Happy Garden" a magazine for Hong Kong children. Now my favorite writer is Eileen Chang, several of whose novels are available in English. She is one of the great writers of modern China.

Shakespeare's  Romeo and Juliet, the best romance in history. I found it so beautiful that in my twenties I even tried to memorize it. As having a Chinese-style education, I memorize easily. I especially like to memorize poems and sing them to the accompaniment of my qin, the Chinese stringed instrument that I play professionally.