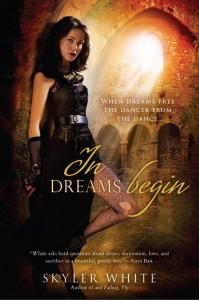 Really, it's no big deal, postponing the honeymoon a few days.   Laura's a contemporary woman, and sometimes the traditional rituals just aren't convenient.   But on her wedding night, her pilgrim soul voyages to an age when ritual and tradition rule.   Channeled into the body of Irish revolutionary Maud Gonne, Laura becomes the muse and soul-mate of poet William Butler Yeats, while the occultist who conjured her, Ida Jameson, will do anything to get closer to the dark forces she believes brought Laura.   Pinning a genre on Skyler White's story is no simple task, but if it sounds like your cup of Victorian tea/Starbucks brew, leave us a comment for a chance to win a copy.

When I'm old, I'll say I married in black today because I put cute ahead of lucky.

A six-word memoir for your protagonist, Laura:

Your favorite line or moment in In Dreams Begin:

"Hello, Ida," he said. "Welcome to Hell-‘the place where dreams come true." His beautiful whisper echoed magic and power in Ida's clouded mind. "Where we speak with our bodies, and fuck with our words. Would you like to come and talk with me?"

What were the original "triggers" or inspiration points for In Dreams Begin?

I was on a quest for the prototypical Romantic Hero. And the more I looked, the more it seemed to me that he couldn't be modern. There's a self-consciousness around the over-the-top gesture that I just couldn't get around, so I started investigating the historical Romantics.

So is that why Laura is so uncomfortable when Yeats goes on bended knee?

Exactly! Laura has the modern terror of the awkward, so she's very embarrassed by how earnest Yeats is. His lack of irony is hard for her.

Yeats is technically post-Romantic, but he's Irish, which more than compensates in my opinion. My initial intent was only to base a character on him. That he was active in the occult and that he loved the same women fruitlessly for thirty years were just added perks. But when I discovered that Maud and I share a birthday minus exactly one hundred years, the book started getting personal. The more I learned about him and Maud, the more intertwined my life and his past seemed to be. I did research until there was just too much real history to walk away from. I mean, Maud and her married lover had sex in the crypt of their dead son on Halloween night, 1893. As a novelist, how could I leave that history and make something up? I had to just take it and write the story into the missing places.

And where does Amit, Laura's husband in the present day, figure in with the Romantic Hero prototype?

Amit is every bit as sincere. But he's practical. He does Chinese take-away when she needs it instead of moonlit boat rides. He loves her, practically. He sees her – who she really is, what she needs. But, like Yeats, he also sees her highest, mythic self, the self she experiences with the poet. And she loves them both, despite (or maybe even because of) the paradox.

It was fun trying to separate the threads of fact and fiction while I read. (The scene in the crypt was not one I would have put in the fact column.) What's the best word to capture the role of history and Yeats' work in the shape of the narrative?

They contained it. They created the form I poured my story into. The rule I set for myself was that I couldn't make up anything that didn't fit inside history or Yeats's own writing. I couldn't break the frame. So yeah, the crypt and Glasnevin and even the visit to the metallic medium all actually, probably happened. What they mean and how they relate to each other was where I got to play!

Ida. Ida, Ida. She's a pretty intense antagonist.   Does she have a historical counterpart? And do you think she would have fared better in a more contemporary age (you know, even more than the average woman)?

Historically, Ida Jameson was the daughter of the famous whiskey distiller, she and Maud were really friends and even had matching gold rings. And there actually was a Mrs. Rowley who smelled sulfur and cried out that she was in Hell during a séance Yeats and Maud attended. But there's no evidence they were the same person and there's no history of Ida beyond her parentage. And I did look! So she's mostly my invention. And yeah, she's a difficult figure. Her sin is the inverse of Maud's. Maud had no imagination. Ida has more of one than is good for her. She has imagination and curiosity and a real intellectual hunger, all of which are stifled and thwarted by the world she's born into. She is as warped and twisted by trying to grow around her confines as Maud is stunted by not trying to grow.

Laura's career in advertising is one that's artistic, but also has a strong corporate and commercial aspect to it. Readers see her passion for it in some wonderful scenes, but Yeats doesn't get to. Is her career something he would understand and admire? How does it connect to being a poet or a revolutionary?

What an awesome question! I think Yeats sees that in her, even if he never bears witness to her work. Artists recognize each other. By the way we talk to (or ask questions of!) each other. And Laura, working in advertising, is the direct inheritor of both the poet and the revolutionary. Not at first, because she has learned from both Will and Maud, and because she has internalized Ida. It's why she tells Amit to go back to music. Because she understands what Maud never did, that revolution has to be about more than tearing down the old forms. If you don't have something to create in their place, you don't have a full revolution, just half a turn, only the descent. If Laura tears down the traditional form of marriage, but isn't re-inventing with her husband what their marriage means, all she has is divorce.

Number of manuscripts you wrote before your first book, and Falling, Fly sold:

Seventeen drafts of and Falling, Fly and I don't know how many of a previous, full-length, completed-and-buried contemporary romance now quietly decomposing under the bed. As it should be.

From page one, draft one to the "sold" call: How long?

An hour-long track of rain and thunder played on my iPod to in-ear earbuds that completely drowns out all ambient noise. It both keeps me focused and, when it ends, reminds me to take breaks.

Writing advice you're glad you followed:

Write the book you want to read.

1.         The things that hurt me-‘things in the world, in my life, or in my head that I don't understand or aren't the way I want them to be. I use my writing to push against them, to imagine better ways or ask questions, and to challenge myself. Writing itself is hard for me, and I like making myself tackle what's difficult.

2.         The things that turn me on – ideas and scenarios, people I know or don't know, certain songs, times and places. Fiction is a padded playground where my hyperactive imagination can come out and tear around without hurting actual people or breaking its metaphorical neck.

3.         The things that bring me peace-‘certain perspectives, how I feel with my husband, the optimism of my children. I love a good wallow, but the constraints of genre fiction require the HEA and I love the challenge to create that in spite of myself. Because I do believe we can.

Oh, ack! Just one? The d'Auliere's Book of Greek Myths.

Skyler White is the nationally bestselling author of dark fantasy novels "and Falling, Fly' (Berkley, March 2010) and "In Dreams Begin' (Berkley, November 2010). She lives in Austin, TX. Visit her on the web at http://www.skylerwhite.com.

Alyson H. does the Intro Interviews, and can be contacted at DAIntroInterview AT gmail DOT com.