Feeling tired lately?   Have you considered the possibility vampires are feeding on you, then wiping your memory?   Neither have most of the residents of Seattle, but maybe they should, especially Mackenzie Foster-Shaw, whose rare, irresistible blood type makes her extra vulnerable.   She only knows that a family history of unexplained disappearances is bound to catch up with her.   That's why everything in her life is temporary, including this relationship with Dominic Serrano.   He's got answers, but they come with danger attached.

A six-word memoir for your protagonist, vampire Dominic Serrano:

Revenge is sweet-‘love is sweeter.

In your letter to readers, you mention Chris Sarandon's role in Fright Night as an early inspiration for Dom.   What did you love about Jerry Dandridge, and where did you go from there in terms of Dom's character?

Except for the part where Jerry Dandridge turns into a monster, what's not to love? He's gorgeous, mysterious, sexy, suave, tortured, confident and dangerous. It just so happens this describes Dom as well. But whereas Jerry follows his instincts, Dom chooses to fight them. 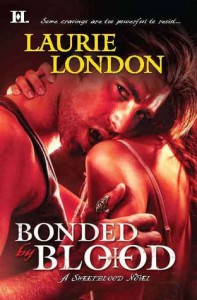 The original "triggers" or inspiration points for Bonded by Blood:

In my mind, I kept seeing an injured man at the edge of an old cemetery. Covered in leaves and branches to shade him from the sun, he was desperate and needed help. I wondered who he was, why he was there, what had happened to him, and who was going to help him. Then I saw a woman ride in on a white motorcycle, and the story took off from there.

A cool re-imagination of the "knight on a white horse." It's a powerful introduction to the story's tensions between doom and freedom.   Was this always the first scene, or do you tend to change your openings?

Thank you! Wow, I love your analysis. This was always the first scene. Very little changed from when I originally wrote it to what is in the final book.

How did the "sweetblood" concept evolve?

In that opening scene, I saw Dom attacking Mackenzie but I knew that he wasn't the villain. He was injured, in desperate need of blood and energies, and was in agony over what he'd done. But I went further than this. What if her rare blood type makes her the focus of the Darkbloods who'd been after him? He must stay near in order to make sure they don't find her, but he's afraid he'll screw up again. And thus the idea for the vampire black market was born along with the overall goal and motivation of the villains. I like that the hero and the villains are vampires-‘they're faced with the same temptations but make very different choices.

One of my favorite lines/moments comes at the end of the first chapter. With an unconscious Mackenzie in his arms, Dom emerges from the trees surrounding the cemetery and sees not a car or a truck, but a white motorcycle parked on the gravel. He asks himself, "Who is this woman with the Hello Kitty keychain?"

I had no idea how he knew about Hello Kitty. I doubt my husband could look at a keychain and recognize Hello Kitty by name. The reason ended up seeding the events of the second book.

An unexpected research detour you made while writing Bonded by Blood:

I researched whether the type of saddlebags available for a Triumph Bonneville motorcycle would suit my purposes. It needed to be big enough and fairly rigid that Mackenzie could keep her camera inside. She's a movie location scout, and I always saw her on that white motorcycle. My research showed that the type of saddlebags I imagined were available for a Harley-Davidson, not a Triumph, and I couldn't find an example of it being retrofitted. Could I have her ride a Harley instead? No, I decided, because I heard Dom saying in a future chapter, "A woman on a Bonnie is hard to forget." So I took creative license and kept her on a Triumph with saddlebags made for a Harley.

What's coming up next from you?

Embraced by Blood, the second book in the series, comes out in July.

That one features Dom's brother Alfonso, whose brief appearance in Bonded is intriguingly ambiguous.   What other characters from Bonded will be appearing in future books?   And do you know yet how many installments there will be in the series?

Lily, whom you meet several times in Bonded, is the heroine of Embraced By Blood, and of course, you'll see Alfonso. I have to tell you, when I first wrote the scene with Lily in the gym, I didn't know who he was. I soon found out, however. J Jackson makes a few memorable appearances in Embraced. My plan is that Jackson will be the focus of the third book and Santiago, the fourth.

Wow, this is a tough question because I've received a lot of good advice. I guess I'd have to say that I'm glad I followed Alexis Morgan's advice. Early on, I told her I was writing a vampire story but worried that there were so many out there. She encouraged me to write the story I wanted to write and to capitalize on what makes it unique. She said there's always room for a different and strong voice. At the time, I really didn't understand what that meant, but it gave me the confidence to keep going.

I can imagine that's daunting, developing your own take on a genre with so many variations, and at the same time, very strong reader expectations.   How did you work with that?

To be honest with you, I wasn't sure if my take on vampires was unique enough. I examined what attracted me to the genre as a reader-‘the character archetypes, the themes, the suspense/danger, the emotion, the intense love scenes-‘and tried to incorporate them into the Sweetblood world. I dropped the elements that didn't intrigue me and exploited the ones that did.

Also, I drew upon my own personal experiences living in the Northwest. Many people here, myself included, suffer from Seasonal Affective Disorder and have chronically low levels of vitamin D. Because we get energy from UV light, a lack of sun during the winter makes us lethargic and depressed. When you're from Seattle and you visit Cabo or Maui during the winter months, the difference in your energy level is striking. I got to thinking, maybe that's why vampires can't go out in the daytime-‘the sun has the opposite effect on them-‘it makes them weak. This also explains why they need us to survive-‘their bodies are unable to convert sunlight into energy like we can, so they must take it from us.

I was a systems tester/programmer and an underwriter before I quit to stay home with my kids.

I often write with my noise-cancelling headphones turned on, but no music. It muffles most of the sound around me and I'm able to concentrate better. I'll even do this when no one else is home.

Three things that feed your creativity:

1. I often stay up late writing, because that's when my internal editor goes to sleep.

2. When I go out for a run, I listen to playlists made for the point of view character I'm getting ready to write.

3. Long, hot showers. There's something about water that makes the ideas flow.

The Island Stallion by Walter Farley

The Giver by Lois Lowry

The Shadow of the Wind by Carlos Ruiz Zafon

You can find Laurie on the web at LaurieLondonBooks.   Laurie is autographing a copy of Bonded by Blood for a DA reader, so leave a comment for a chance to win.

Also, MERRIAN: you won the set of Skyler White books from the previous Intro Interview.   Send your post info to Alyson H., who does the interviews, at DAIntroInterview AT gmail DOT com.