Head of a vast cattle drive, determined to prove himself to his older half-brothers, Luke McCutcheon doesn't imagine baby-sitting will do much for his reputation, but-‘well, he delivered that baby, and as her mama doesn't have even a horse to pull her wagon, it's clear someone needs to step up.   But Faith Brown considers being the victim of desperate circumstances a strictly temporary condition, and with her secrets hot on her heels, she isn't so sure about trusting anyone but herself as her hero.   We're giving away a set of Caroline's first two books, both Westerns, so leave a comment for a chance to win.

An eerie   keening echoed through the trees.   Luke McCutcheon straightened in the saddle, and his filly's ears flicked forward, then back. 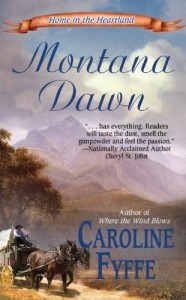 What were the original "triggers" or inspiration points for Montana Dawn?

Big family.   After writing about Chase and Jessie and the two children in a small cabin [in Where the Wind Blows], I craved a big family setting and all the tomfoolery that goes along with it.   Also, sibling love. I come from a family of five girls and we all were, and still are, very close. I wanted to incorporate that. And lastly, I adore cattle drive stories.   The show Rawhide was a favorite of mine.
A six-word memoir for your protagonist:

This is a hard question because I have several scenes that I love.   I guess if I had to pick, it's a conversation between my hero, Luke McCutcheon, and his mother.   I don't want to give anything away, but when something is perceived one way and in reality it's proven different, and a whole new set of beliefs are opened up, that's exciting to me.   Luke's beliefs are shattered and he's set free, giving him, and the story, a new direction.

Luke and Faith are both tough survivors, true examples of the frontier spirit.   But let's say you had to put them in another time and place.   What would you choose for them?

Ha, that's funny. I think I'd like to see Luke handle Regency England.   I know Faith would adapt easily, but Luke might have to do some wrangling to be able to fit in.   Once done, I think he'd definitely make a debonair and dashing Duke.

The river crossing scene is particularly vivid one, and I also enjoyed how Ward Brown, the villain, performs a very heroic deed at this point in the story.

When I began the scene I didn't know ultimately how it would turn out.   I kind of went with the flow, so to speak.   I pictured myself as a girl and how we used to swim our horses bareback in the river on a hot day.   The power the horses have to exert while swimming is indescribable.   We'd have to really cling onto the mane to keep from being swept off.   I wondered what it would be like to have to actually fight that power to stay alive.   And because I'm a horse lover, I had no idea until I got into the scene, and things became more precarious for Luke, that things would go so wrong for Chiquita.   And pertaining to Ward-I had to give him at least a couple good qualities. (His good looks being the other.) Few of us are either all good or all bad.

It's nice seeing Luke's close relationship with his headstrong sister Charity.   Tell us what bonds those two in particular, and is Charity a character you see yourself writing about more in the future?

Absolutely!   I'm writing about Charity right now in the sequel to MONTANA DAWN.   She teams up with John, the McCutcheon brother who has just gotten his college degree and medical license and is going to Rio Wells, Texas.   Charity's unique relationship with Luke, and with each of her brothers, really, stems from her soft heart and need to protect.   She works to cover her softness by trying to be just one of the men, and works hard to prove that she is no different from them.   This often leads her into trouble.

The book has a fairly large cast, starting with the McCutcheon clan itself and branching out from there.   Who's your favorite secondary character?

ACK!   I don't know.   I guess if I have to pick it would be Roady.   I fashioned him after a training assistant (although he spells his name Roadie) who used to help me with my horse when I was taking cutting lessons in California, many moons ago.   He was just so down to earth and kind and westerney, I had to make him Luke's best friend.   And that's saying something because Luke also has three wonderful brothers.   I also love Chance.   I had no idea he was going to fall in love with Faith.   He just endeared himself to me-‘and her.   I've always liked the sensitive shy type.   LOL

Number of manuscripts you wrote before your first book, Where the Wind Blows sold:

From the time I started writing until I sold, I completed three and a half manuscripts. Where the Wind Blows was my first and Montana Dawn my second.   Then I wrote a contemporary woman's fiction, which was so much fun to write.   I'm not sure what to do with that just yet, but I had this story I had to tell.   The manuscript I finished recently is a Historical Christian fiction-..I'm all over the genre board.

Length of time from your decision to write for publication to the "sold" call:

Twelve years from beginning to "sold," with four years off in the middle.   So a total of eight serious years.   I owe my friend and fellow equine photographer and journalist, Cheryl Magoteaux, for getting me back on track.

If I'm having a hard time finishing a scene I'll go back and switch the POV.   It's not hard to do and gets the story moving right along.

Writing advice you're glad you followed:

Write every day.   Even if it's only a page.   You'll be amazed at how much you'll get done by just sitting down.

Prayer, friends and a good book!

I've been an equine photographer for the past twenty years. (http://www.carolinefyffephoto.com)      After winning the Golden Heart in 1999, I gave up shooting my own shows (it's a lot of travel) to be able to spend more time with my family and writing.   I still did ranch calls, worked for publications and shot at the world shows for another photographer.

Your favorite book when you were 10 years old:

The Seventh Man by Max Brand.

One commenter will receive copies of both of Caroline's books, so chime in below!