I didn’t think I’d be doing this interview.  A few chapters into The Taker, I knew it wasn’t exactly romance, and doubted it was right for Dear Author.  But the story of Puritan-born Lanore McIlvrae and the gift she’s cursed with kept calling me back, and months after the last page, I was still thinking about it.  So here is The Taker, a well of love stories that takes you first to present-day Maine, then deeper, darker 200 years earlier, and then to where it all seems to begin, the age of alchemy and magic.  And back again. 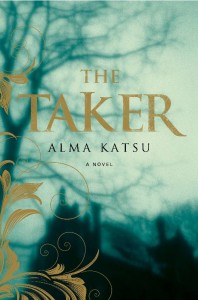 A six-word memoir for your protagonist, Lanny McIlvrae:   An impetuous girl who loved unwisely.

A favorite line, scene, or moment:

“Looking back, I know we were only filling in the holes in our souls, the way the tide rushes in sand to fill the  crevices of a rocky shore. We—or maybe it was just I—bandaged our needs with what we declared to be love. But  eventually, the tide draws out what it has swept in.”

Besides a compelling story, what else in The Taker will appeal especially to romance readers?

I think there’s a lot that will appeal to romance readers. The Taker is a very romantic story, but darkly romantic,  more like Wuthering Heights, Far From the Madding Crowd or The Portrait of Dorian Gray. So there are clever  women, and handsome, strong-willed, dashing men; there are isolated towns and lavish mansions where anything  can happen. But at the heart of it, The Taker is an examination of what love really is. What does it really mean to  love someone? Ultimately, it means to love someone more than you love yourself. And sometimes that’s a hard  lesson to learn.

The original triggers or inspiration points for the story:

When I undertook writing The Taker, my goal was to write a sweeping story that would carry the reader away, with characters you couldn’t forget. I didn’t think I’d ever finish it, let alone see it published. I wanted to learn how to write a novel, and I wanted to write the kind of story I liked to read (Dumas, for instance)—but is being written less and less. Inspirations include:  Interview With the Vampire, even though there are no vampires in The Taker; Orlando, the movie version directed by Sally Potter, for its visual lushness; Fanny Hill and Moll Flanders; and the modern counterpart Slammerkin by Emma Donoghue and the works of Sarah Waters.

Reverend Van der Meer, the traveling preacher who comes to Lanore’s settlement, is one of the creepiest characters I’ve read for awhile.  Will he appear again in the trilogy?

Yes, Jude is in The Reckoning, as annoying and creepy as ever. His character is based on a real charismatic preacher who tried to win converts to his practice of “spiritual wifery” in Maine in the early 1800s.

You’ve said elsewhere that finding parallels between The Taker and “Pinocchio” helped you in understanding your own story and theme, one big difference being there is no Blue Fairy in your story to wave her wand and make everything all right.   Which got me thinking…  How about Magda, the prostitute in St. Andrew?  She doesn’t solve any of Lanore’s problems, but doesn’t she fill that role in some other ways?

I think you’re right. I hadn’t thought of Magda that way, but she is absolutely in the role of a guide for Lanny, someone older and wiser who helps Lanny in her journey (in this case, becoming an adult.) I think of Lanny as being like Pinocchio in that she is in a rush to grow up and be considered an adult, and yet she doesn’t know how to get there. She’s particularly in a rush to be in an adult love relationship before she knows what this really means. And in her rush, she makes some bad choices for which she must atone. Her own parents are too protective to prepare her adequately for the journey she must take, and so Magda is one of the few women she thinks of to turn to for answers.

I loved the suspense of the climax, when Adair is about to go on his trip.  Without revealing too much, can you discuss writing that part, and how you approached it?

The funny thing is that the big twist in the book was not in the original manuscript! My agent came up with the idea—which, once I’d gotten over my surprise, I agreed was brilliant. It required completely rewriting the last third of the book, and threading little clues through the first two thirds and making everything consistent. But it was worth it! And all those elements leading up the reveal—the trip, her inquiries to experts—all came out just in a rush, like that part of the story had been waiting to be told.

What is coming up in The Reckoning, the next book in the trilogy?  Is it focused more on the present-day story, with Luke and Lanny on the run together, or are we going back to the past?

All of the above, actually. It takes up where The Taker left off and becomes very much a chase story, with Lanny and Luke being chased, but there are bits of backstory, so you still get some historical story as in The Taker, just less of it. Many of the characters come back, including one that might surprise you (hint, hint).

The Taker is your publishing debut, but is it the first novel you wrote?

I was a fiendish scribbler as a child, always writing. I wrote my first novel when I was seventeen. It was terrible. I rewrote it for my senior thesis at Brandeis—at the time, the undergraduate writing program had a thesis requirement. During the ten years it took to write The Taker, I wrote other novels in between revisions, all spy thrillers, which I credit with teaching me how to drive a story with plot.

What did the CIA (your former employer) teach you about writing?

Not much for fiction, I’m afraid. Intelligence reporting is about being concise and clear, distilling a complex problem into its essence but still being able to unpack it in order to get at important supporting facts if needed. This ability to summarize but still present in a compelling way has been very helpful in writing promotional material, though. And you go through many layers of editing, so you lose any feeling of authorial ownership—you learn to detach from your precious words, which is helpful in working through a manuscript with your editor at the publishing house. It becomes about making the best possible story and not getting hung up on your favorite bits.

Your oddest or most reliable writing ritual:

Reclining on a sofa or bed, with my whippets pressed against me. I hate sitting in a chair, probably because I’m so short that it’s hard to get comfortable.

Your favorite book when you were ten:

Life Among the Savages by Shirley Jackson. It’s a collection of Jackson’s comic essays on family life for women’s magazines from the 1950s. Jackson is of course best known for her horror stories and this collection has the feeling about it of forced laughter, a sense of being confounded and even slightly horrified at the absurdities of suburban life. A strange thing for a child to be taken with, but then I grew up in an odd family and was probably looking for answers for the strangeness going on around me. It made an impression and some people say my writing reminds them of Jackson’s, which I take as a great compliment.

A book or author you recommend again and again:

There are so many that it’s hard to choose. It doesn’t help that my tastes are eclectic. David Mitchell, author of Cloud Atlas, Ghostwritten and The Thousand Autumns of Jacob de Zoet. Adam Haslett, Union Atlantic. Anything by Hungarian novelist Sandor Marai but particularly Casanova in Bolzano. And of course anything by Patricia Highsmith, and Audrey Niffenegger and The Time-Traveler’s Wife.

Thanks to Alma for joining us.  You can find more about her and The Taker trilogy (she’ll speak to your book club!) at www.AlmaKatsu.com, or read her articles at The Huffington Post.  Whether you’ve read the book or would like to win a copy, we’re happy to hear from you in the comments.