Three diverse books sharing one common thread: that’s the idea behind the DA³ Interview. All of today’s books include characters who are, or have been, part of the foster care system. First, meet the books: 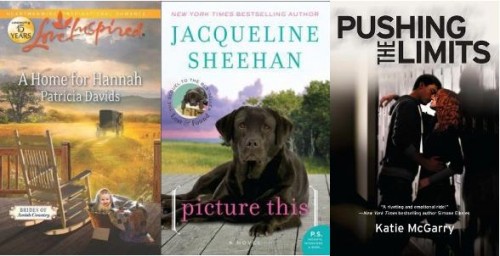 Picture This is Jacqueline Sheehan’s follow-up to her best-selling women’s fic Lost & Found.

The foster child in this story is seeking her biological father, whom she believes is the late husband of main character Rocky Pelligrino. Healing from her loss, and in the midst of making a new life without her husband, Rocky is now faced with a mystery that could keep her tied to the past.

Katie McGarry’s Pushing the Limits is a debut YA. Noah is willing to make any sacrifice to reunite what’s left of his family, but what he really needs is trust. Unfortunately, that’s in short supply because the system that was supposed to protect him let him down. Classmate Echo has been betrayed, too, by her family and her own memory, so when these two have to rely on each other, some thick walls have to come down first.

In A Home for Hannah, by Patricia Davids, an ailing mother brings Miriam Kauffman back to the Amish community she left behind years ago.

She thinks she’s doing rather well at suppressing the pain and resentment that caused her to leave in the first place, but then a baby is abandoned on her doorstep.

JACQUELINE SHEEHAN: One man, one dog, and me.

PATRICIA DAVIDS: Amazing how a baby changes everything.

JACQUELINE SHEEHAN: …a psychologist who takes a leave of absence from her job to become an Animal Control Warden.

KATIE MCGARRY: …a brilliant artist, a student, and before the accident she used to be on the dance team.

What readers will love about the hero:

JACQUELINE SHEEHAN: I hope that readers will love Rocky’s willingness to make a complete idiot of herself in certain circumstances. She is quite impulsive and makes more than a few mistakes socially. It was completely fun to write about this aspect of an otherwise controlled psychologist.

PATRICIA DAVIDS: Sheriff Nick Bradley is a hunky, cop with a darling sense of humor.

JACQUELINE SHEEHAN: …in a driveway.

KATIE MCGARRY: …in front of the fountain dedicated to Noah’s deceased parents.

A scene you vividly remember writing…

JACQUELINE SHEEHAN: I can’t tell you about the scene that I remember most vividly, because it would be a plot spoiler. But I remember all of the scenes where Rocky is shooting her bow. I step into her body, see the target, feel her/my arm pull the bow back, and release. I feel her frustration when she misses the target, and her burning muscles when she has practiced for hours.

KATIE MCGARRY: The cemetery scene between Echo and Noah. There is a paragraph in that scene that discusses scar tissue on one’s soul. To me, that moment between those two characters is the heart of the novel.

PATRICIA DAVIDS: A Home for Hannah was written a few months after my husband passed away from a brain tumor. I was at the cemetery one day when I noticed some small mementos left on other graves nearby. I went home and wrote the scene where Miriam finally goes to her brother’s grave. (He was killed in a high-speed chase after he stole a car. Nick was the officer pursuing him and she blamed Nick for her brother’s death.) As Miriam kneels beside her brother’s tombstone, she notices small silver foil stars, some new, some weathered, in the grass around the stone. Nick has quit smoking, but he chews gum. Each time he opens a stick, he folds the foil into a star and puts it in his pocket. Miriam is confronted with proof that Nick mourns her brother, too, and has been to the grave numerous times–something she has never found the courage to do.

About the foster child characters…

JACQUELINE SHEEHAN: One of the main characters in the book, Natalie, had lived in foster care for about 14 years. We gradually learn more and more about her background, the death of her mother, and the toll that early trauma took on her. But should we believe everything that Natalie tells us about her foster families?

KATIE MCGARRY:  Noah and his younger brothers entered the foster care system when their parents died in a house fire. Through these characters, the reader sees the extremes of the system, highlighting both the good and the bad. Noah’s experiences in the system positively and negatively reshape his personality several times throughout his life.

PATRICIA DAVIDS: Miriam hears a disturbance outside mother’s farmhouse late one night. She thinks another Amish teenager is seeking her help to leave the community, but she finds a baby on the doorstep, instead, and sees a buggy driving away. Miriam’s mother has remained Amish. She believes the unknown Amish mother will return for her child and insists that they keep the child until she does. Miriam, as a nurse, has a duty to report the baby as abandoned.

Ohio is a state that has a “Safe Haven” law. If a child under one month of age is left at a hospital, a fire station or with the police, no crime is committed and the parents have relinquished all rights. The child is placed in foster care and can be adopted immediately. If a mother leaves her baby anywhere else, its child abandonment and a crime, hence Miriam and Nick’s dilemma. Does leaving a baby with a nurse constitute a Safe Haven act or not? The nearest hospital is almost 30 miles away, a very long trip in a buggy. To make matters worse, an unsigned note says the mother will be back for her child, but it isn’t safe for her to keep the baby with her now. It it’s a Safe Haven act, legally the sheriff can’t try to find the mother. If it’s not a Safe Haven act, he can search for her but when he finds her he will have to charge her with a crime.

Whether it’s from the news or personal experience, I think everyone knows stories of adoption and foster care that range from inspiring to horrifying. What would you say most influenced how you depicted foster care in your story?

JACQUELINE SHEEHAN: The main influence for me was working with college students. I was a psychologist at college counseling centers for nearly twenty years and worked with students who had miraculously emerged from foster care into college. The first time that I met a freshman student who told me that she didn’t know where to go over Thanksgiving break, I was baffled. The residence halls closed during Thanksgiving. She told me that because she was 18, she no longer qualified for foster care and she simply had no place to go. It was a defining moment for me. I helped her contact the advisor for international students and they swept her up into their group, but I was humbled by her sheer grit and determination. Since then, I learned that some foster homes were wonderful, some were adequate, and some were awful.

KATIE MCGARRY: Pushing the Limits was influenced by both the inspiring and the horrifying aspects of the system. Unfortunately, there are cracks in the system whether the cracks are caused by neglect or not enough funding or staffing. Regardless of the reason, children can suffer.

While that can be true, there are those who work with or in the system that are one thousand percent devoted to their job and to the children they serve. They become a beacon of light to children wrapped up in darkness.

PATRICIA DAVIDS: I tried to give foster care a positive spin in my story. The baby is placed in foster care, but the social worker is sympathetic and hopes to reunite the baby with her biological mother. The heroine has fostered runaway teens and understands the struggles they face.

How would one of your characters define “home” or “family”?

JACQUELINE SHEEHAN: Rocky is in the midst of defining family and home. Her young husband dies suddenly in Lost & Found, so she must re-define everything that she knows about home. In Picture This, she would probably say that family is a combination of those people who you are biologically related to, and those who you find along the way. She would include Cooper the dog in her family.

PATRICIA DAVIDS: For the Amish, only God is more important than family. Because Miriam rejected the faith she grew up with, she was shunned. She misses that sense of having an extended and close-knit family support system. Nick and Hannah bring that sense of family back to her in a surprising way.

JACQUELINE SHEEHAN: I am already working on my next book. It is about adoption, but a very complicated form of adoption. The main character saves a Mayan child after a massacre and illegally adopts her. After that book, I just might return to my cast of characters with Rocky and Cooper.

KATIE MCGARRY: I’m currently working on revisions for Dare You To, a companion novel to Pushing the Limits. Dare You To follows the story of Beth, a secondary character from PTL. Dare You To is scheduled to be released in 2013.

PATRICIA DAVIDS: I have a Christmas book coming out called A Hope Springs Christmas. It’s the story of an Amish widow who agrees to become a matchmaker for her next door neighbor only to find the man she has known for years just might be a perfect match for her.

JACQUELINE SHEEHAN: This is a weird one for a ten year old. Hawaii by James Michener. I had learned that I could read anything, and there was something so powerful about reading his massive book that covers centuries.

KATIE MCGARRY: A Wrinkle in Time by Madeleine L’Engle

PATRICIA DAVIDS: It was a book called Beautiful Joe. It’s a story told from a dog’s point of view about the family that saved him from cruelty. I loved that story and cried every time I read it.

Many thanks to Jacqueline, Katie, and Patricia. We have some books to give to a commenter, so go forth and comment!