Alyson H. brings Dear Author occasional interviews with newly-published authors. If you are an author with your first (or perhaps second) novel coming out, and you’d like to be considered for an interview, send your name, web information, and release date to DAintrointerview at gmail dot com.

I went looking for a straight-up contemporary and found Lisa Dale, whose second novel, It Happened One Night, caught my eye with a favorite theme (friends-to-lovers) and a favorite place (Vermont) as a setting. Though Lana and Eli’s romance takes center stage, the novel is about all kinds of messy, selfish, lavish, fiercely loyal love. And it all starts with a pregnancy test in a barn.

Join the conversation: One commenter will win copies of both It Happened One Night and Lisa’s first book, Simple Wishes. 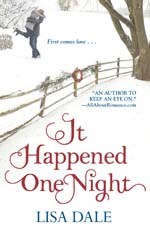 "Falling for a friend-‘terrible timing."

The original "triggers" or inspiration points for It Happened One Night:

This book came together because of a number of elements in my life all converging at once. First, it’s set in Vermont-‘because I fell crazy in love with the state when I was on vacation there. Second, it’s "about" two sisters who own a wildflower farm because I became fascinated by wildflower folklore, meanings, and trivia. Third, there are issues of motherhood and pregnancy in this book because I wanted to write about the inevitable crossroad we all face as women-‘the decision whether to become mothers or not. And fourth, this is a book about friends who figure out how to strip away their own self-delusions to see the true nature of their relationship-‘and that’s because I thought it sounded like a messy enough love story for me to want to write it!

An unexpected research detour you made while writing It Happened One Night:

There are so many unexpected research stops for me-‘part of what let me bring many elements to a story is just following my nose. Anyway, because this is a friends-turned-lovers story, I wanted to learn more about how beta guys go about picking up women-‘and how a man could consciously create a change in the dynamic of friendship. So I ended up mucking around in this really fascinating arena where men can take classes, go to conferences, and read books about how to pick up women. The techniques were surprising-‘and horrifying too!

You must have learned something useful from that, because Eli’s awakening is one of the delights of the book. What’s fun about writing a "beta" like him?

I tend to love betas that have just enough alpha not to be totally lame. In other words, I like my heroes to be real men with real problems–but I like them to have a strong and sexy side too. In It Happened One Night, Eli lacks the confidence to go after what he wants (hint: it’s Lana). But then he has a big, life-changing moment–I won’t say exactly what happens. I’ll just hint that Eli learns how strong he is not because he accomplishes something impressive, but because he doesn’t.

The way life teaches us big lessons isn’t always what we expect, and I hope my books reflect real-life encounters with unexpected Grace. If I were writing two-dimensional alpha heroes, all that fun layering and texture would be impossible! So Eli is an emotional beta with the backbone of alpha–he just doesn’t know it right away.

How did you come to choose Eli’s career? There’s a nice symmetry in Lana’s passion for wildflowers and Eli’s for meteorites-‘in some respects opposites, but then again, they’re both natural, elemental.

Glad you picked up on that! Eli became a meteorite hunter because on the night I got the call that my first book, Simple Wishes, would be published, I couldn’t sleep a wink. I stayed up into the wee hours watching the Discovery channel, and a documentary about geologists who find and sell meteorites came on. Eli’s love of meteorites does parallel Lana’s love of flowers–they are both sorta nerdy people who love the natural world in their different ways. 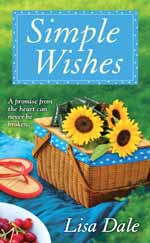 Karin is such an interesting character-‘so intense and focused that she sometimes crosses the line into being blind or manipulative. But my heart went out to her, and I couldn’t ever dislike her. Did you find it tough to strike the right balance as you wrote her?

I’m thrilled to hear you like Karin! She’s a somewhat controversial character to some readers. Karin (the heroine’s sister) is a woman who means well, all the time. She wants the best for her family–for her husband and for Lana. BUT sometimes, she loses sight of the situation and ends up doing things entirely wrong (for all the right, loving reasons). Ultimately I’m happy with Karin’s role in the book because, love her or hate her, she will keep you thinking as you read. And that’s my goal–to engage people on a deep emotional level with every page I write. That means I have to push people’s buttons a bit. So I do!

Oh! I don’t want to give anything away! Readers have been reporting that moments in this book have made them go teary-eyed. So I’ll just offer you this quote: "And now even as an adult who lived among flowers, she still felt humbled to think that a wildflower could coax the most iridescent purples or fierce magentas from the most inhospitable soils. She wanted her own life to be like that, to grow something worthy from hardship and strife."

At your blog, Book Anatomy 101, you write that you like figuring out "how books work, how authors pull off the magic of writing a book." Would you say there’s a particular lesson you learn over and over, or one that helped you as you wrote It Happened One Night?

I have to admit, the blog’s taken a kind of different direction these days. I always blog about books, but I’m not doing quite the same hardcore analysis that I was before. Now it’s more about connecting with other book lovers–AND, I should mention, giving away free stuff. Every month one commenter wins a prize of her choice from my LOVE TO READERS page. And I throw in some other giveaways as well.

As to a lesson I learn over and over as a writer, that’s a hard question! You’re making me dig deep (a challenge I’m always up for!) Let’s see… I suppose what I keep learning and forgetting and relearning is that I’ve got to be true to my own voice. When I worked in publishing and then later when I went to grad school, there were so many people around me telling me how to write. Everyone meant well, and everyone was “right” in his or her way, and I learned a lot. But ultimately, I’ve really just got to trust my instincts (which are getting sharper by the day, thank goodness!) and follow my fascination wherever it leads.

Length of time from page one, draft one of your first book, Simple Wishes, to the "sold" call:

I held a number of odd jobs-‘so many little jobs here and there. I also worked briefly at a literary agency and got an MFA in fiction, where I worked at a lit mag. Now, I work three days a week at an author’s submission service called Writer’s Relief. It’s cool because it keeps me in touch with helping other writers place their work, but it still allows me plenty of time to write.

When I was a senior in college I went to hear Mary Jo Putney speak at a tiny library in Westminster, Maryland. Her poise, confidence, and sensitivity to gender issues made me think maybe there could be a future for me in romance someday. Someday I hope to tell her that in person. J

I do my best work in bed. My desk can’t hold a candle to my blankets and pillows.

This may sound strange, but I think that in order to follow advice, it’s like you have to discover it within yourself. You know how you can hear something 1,000 times, but it’s only the 1,001 time that it finally takes? I’ve got a lot of good writing advice over the years that has helped me a lot, but at some point, all of that external advice really comes down to internal discovery. Now I know to listen harder to my own instincts-‘and I’m learning this lesson more and more each day.

Tough one! At ten I guess I was reading Sweet Valley High books and Goosebumps. But I can’t really remember!

Jodi Picoult. For her lyrical voice, her intense plotting, and her fascinating research.

Lisa’s web address is www.lisadalebooks.com. There, you’ll find a link to her blog, which has a simple motto: Share your thoughts = Win stuff.