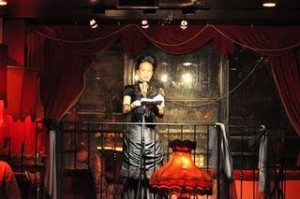 Welcome to a new feature at Dear Author: the Intro Interview. Alyson H. will bring us occasional interviews with newly-published authors. If you are an author with your first (or perhaps second) novel coming out, and you’d like to be considered for an interview, send your name, web information, and release date to DAintrointerview at gmail dot com. 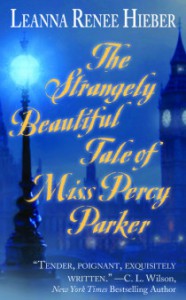 Leanna is also a playwright and actor, and her novella Dark Nest won the Prism Award. She and fellow writers Maya Rodale and Hope Tarr founded Lady Jane’s Salon, a monthly romance reading series in NYC.

We have one copy of The Strangely Beautiful Tale of Miss Percy Parker to give away; you’re invited to leave a comment for a chance to win.

A six-word memoir for your protagonist, Percy Parker:

From beneath my veil; a radiant light.

The original "triggers" or inspiration points for this story:

In my mind: Miss Percy Parker walked into Professor Alexi Rychman’s finely appointed office and I had to figure out why Miss Percy looked like a ghost but wasn’t one. Across the room from this apparition of a woman sat the dark and brooding Professor and I had to know what made him tick. I had to figure out the tense and aching relationship between these two distinctly different people, staring at one another with such intensity, their hearts filled to the brim with secrets. These questions, these characters, utterly consumed me, immediately, and I knew when I met them that my life would never be the same. And it wasn’t.

Where did the phrase "strangely beautiful" come from?

My agent, Nicholas Roman Lewis. It was a brilliant call. I tweaked the title a little, but it’s basically his. He earned his keep with that one, it’s garnered us a great deal of attention. And consensus seems to be that it fits. I couldn’t be more pleased with it and cannot imagine the title now any other way. I suggested that "Strangely Beautiful" be the series title and that was met with immediate approval at Dorchester.

Utter tie between the following: the Beethoven’s Fifth to orchestrate Alexi and the antics therein, the entire waltz scene at the Academy Ball, the first kiss, and Lord Withersby’s entirely inappropriate comic relief in the final scene.

An unexpected research detour you made while writing Strangely Beautiful:

Looking up information on the Ripper murders I came across a newspaper article that was written at the time, lamenting that there were no streetlamps in the heart of Whitechapel. If there had only been more light, the article cried, it could have perhaps stopped these horrific deeds from happening in the safety of darkness. I found this fascinating, that the impulse to fix the situation was just more lights- This tidbit made its way into the novel, where I mention the streetlamps abruptly ending and plunging my hero into darkness.

You allude to the experiences of the Guard in the 18 years prior to the opening of the novel. Do you have this backstory fleshed out, or are you discovering it as you write the series? Any plans for shorter-form prequels?

I have their basic backstory in my head, but subtle details still emerge every day that I spend with them. Book III is a prequel novel, but we’ll be dealing with two Guards at that time, the former one and Alexi’s Guard, so glimpses of the familiar Guard will be shared with the other characters sent to put Prophecy in place.

And I’ll always be discovering more and more as I go forward. I have enough material on Lord Elijah Withersby for a full length-novel I can tell you that, but it just depends on if it can fit within the story arc. If people continue to warm to him, I may have to give him his own book – if Dorchester will let me. :) I’ve a novella for Rebecca and Michael.

The last 80 or so pages of the novel are just riveting-‘thrilling-‘satisfying. How did you go about creating a pay-off ending like that?

*blush* Wow, thanks! Well I guess I’ve always been drawn to stories where a whole lot happens in one fell and maddening swoop. And I certainly write in the sorts of ways I’m most drawn to reading. There’s something very engaging to me about reading– and writing– events at that seizing, tense pace. I honestly can’t say how I came up with the climax other than that it was simply there, in my head, presented like a film. That’s how I write – I see "film bits" in my head and I write them down and string those clips or stills together into a flowing whole. I guess I was watching a bit of a Gothic action-movie in my head when it got to the latter part of the book. Within the revision process a lot of time was spent smoothing that flowing action and really making it hum as the narrative shifts between the relative parties.

A few things I’m hoping to see in future Strangely Beautiful installments: Percy coming into her own. Stoic Alexi being a bit of a love-struck doofus. Jane-doing anything, because she’s fascinating. Rebecca wildly happy. More Shakespeare references. Anything you can confirm or deny about the direction of the series?

Book II picks up exactly where Book I leaves off, with Percy and Alexi in the main focus as they attempt to establish themselves, with greater insight into the rest of the Guard along the way. But again, time is short, as an all out spectral war looms thick on the horizon.

9 years. 9 long heartbreaking years. But worth every minute of it. It’s where it’s supposed to be now. It’s the right publisher, the right editor and the right time.

How you found your agent:

At the time the President of the RWA NYC Chapter, Elizabeth Kerri Mahon (an extremely talented author, look for her Scandalous Women book in 2010!) asked me if I’d tried (in my exhaustive search for an agent) Agent Query.com. I hadn’t. I found my agent, Nicholas Roman Lewis, there. I was intrigued that he also represented theatre artists and had sold movie rights. I thought that might be a good fit. So, thankfully, did he.

Oh, so many. Isabo Kelly, a gorgeous writer, dearest friend and critique partner, and Marianne Mancusi, also a delightful and successful author, who was a guiding hand in the right direction.

I’m very glad I didn’t change this book to be only one genre and kept it cross-genre. It may make it difficult at times to market, and was the reason why it didn’t sell for such a long time due to that marketing difficulty, but in the end it has greater appeal for its cross-genre qualities.

Percy spent her childhood acting Shakespeare with a ghost. What have been your favorite Shakespearean roles to play? How has your acting experience helped you as a writer? And where did you get that fabulous Miss Parker costume?

Titania in Midsummer Night’s Dream – playing a faerie Queen just rocks. Amiens, who sings all the music in As You Like It, that was pretty magical.

My theatre background influences every aspect of my writing. I’m very visual when dreaming up ideas, and the settings are very intense in my mind. I think in many ways like a cinematographer. So I’m a cinematographer for the setting of the book. For the staging, blocking, mood, structure, conflict and general goings on, I’m a director. Then for the dialogue, physicality, motivations, emotions, I’m an actor. I actually have a workshop I teach called "Direct Your Book" that addresses each of these in more detail.

As for the costume, the corset was from a shop in New York, the hat was from Mrs. Parker’s Millinery (when I was searching on-line and found Mrs. Parker – hello, that was fate.) and the skirt is from Gallery Serpentine www.galleryserpentine.com (I’d lusted after their work for many, many years and told myself I’d treat myself to one of their Victorian skirts but only when I sold my book). I put all the pieces together and it seemed to work very well. I felt so happy and at home in it.

A place you’d like to haunt in your afterlife:

Victoria Embankment – along the North bank of the Thames river, London.

And the city of London goes without saying. But I’m just saying.

How did you become involved with Lady Jane’s Salon?

It started like all great things start; in a bar with wonderful company. I was the connective tissue who knew Maya Rodale, Hope Tarr and Ron Hogan, respectively. I know to always accept Ron’s invitations, something cool always happens. Maya asked "why isn’t there a reading series in NYC devoted to Romance fiction?" We didn’t have a good reason why not so that meant we had to start one. Lady Jane’s Salon showcases readers on the first Monday of every month at a red-velvet drenched bar called Madame X and the proceeds raised from $5 admission or a gently used romance novel go to Maya’s Share the Love www.share-the-love.orgstyle=’font-family:Palatino’> , which serves women in need / crisis / transition. We’re humbled and exceedingly proud of this venture that started as a dare of sorts and grew organically into a popular venue for bestsellers, debuts, all lovers of romance and most importantly, a good cause. More at www.ladyjanesalon.comstyle=’font-family:Palatino’>!

Leanna’s website has plenty of goodies, including a contest, free short stories, videos, and her blog. Visit www.leannareneehieber.com .