The 2012 RITA Best First Book interview series concludes with two contemporaries. Read on for some very cool behind-the-scenes stories, and leave a comment if you’ve read either of these books, or would like to win this set.

About the nominated books…

Beautiful Disaster, by Laura Spinella: Mysterious Flynn was the most passionate and stormy relationship Mia ever experienced. More than a decade after he disappeared, she can’t stop herself from rushing to his hospital bedside when she learns he’s in a coma.

Opening lines: You wouldn’t think that the smell of bourbon could derail a business dinner.

Flynn’s six-word memoir: In search of a better man.

Mia Wells is… a holistic designer, a notch above your standard eco-friendly interior designer.

What readers will love about the hero: Flynn is the dare you never took.  But he also turns that stereotype on its ear. By that I mean, yes, he’s dangerous and unpredictable with definite dark side. He’s also smart, kind and wildly misunderstood. Just when you think you have him figured out, you learn something new about him. Oh, did I mention that he’s melt-your-eyes hot?

The first kiss happens… in a seedy motel room. On a bet, Mia ends up there with Flynn—a man she barely knows. After some serious trepidation and tension between the two, she uncovers a hint of vulnerability. We want more. There’s a pause in the air, the reader and Mia believing we’re about to hear an explanation about Flynn’s nomadic life. Instead, she finds herself drawn into a long sensuous kiss, and Mia’s average existence is over.

I vividly remember writing… the beginning of Chapter Two for sure. While the rest of Beautiful Disaster enjoyed, suffered, rebounded and finally benefited from numerous revisions, the scene describing Flynn’s arrival in Athens remained virtually unchanged from the rough draft. It was as if I was sitting on a sidewalk bench, taking very vivid notes, when he arrived in Athens.

An unexpected research detour:  The ICU of UMASS Memorial Medical Center. I interviewed a nurse who specialized in coma patients. We talked in the cafeteria for about two hours. Afterward, she said, “Come with me.” She took me up a back elevator and let me stand in the doorway of a patient’s room.  The sounds, smells and vibe of that unexpected experience were a tremendous help.

This book taught me… PERSERVERENCE.

What readers seem to love about Beautiful Disaster: It is a what if story. Most readers can relate to that. What if, many years and choices later, the person who was once your future suddenly turned back up? What if you had to choose all over again? It’s something people think about, though I don’t know that the actual circumstance unfolds that often.

I’m Not Her by Janet Gurtler: What kinds of drama and conflict come to mind when you hear the phrase “freshman year”? Imagine all that, plus “my popular twin sister has cancer.”  I’m Not Her is also nominated in the Young Adult category. 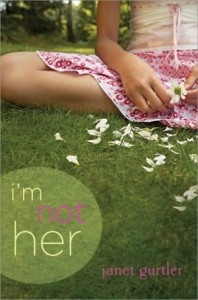 Opening lines: No matter how much I don’t want to care, it’s not easy being stranded all alone in the middle of a crowded room, like the ugliest dog in the animal shelter.

She is: an artist and a high school student. She’s vulnerable but learns to put herself out there in new and heartbreaking ways in order to protect her sister.

The first kiss happens… On the street of her first crush, surrounded by Halloween decorations.

I vividly remember writing: When Tess’s mom gets drunk and tells Tess she wishes it were Tess who got the cancer, not her sister. I wanted her mom to say the most horrible thing she could to Tess and feel bad about it later, but I wanted Tess to have to feel it and deal with the words that couldn’t really be taken back.  I felt so badly for her when I wrote it, but it was kind of the elephant in the room. The great thing for me was that her journey involved realizing that it wasn’t true.

An unexpected research detour: Art contests to figure out a good art contest for Tess to compete in.

This book taught me… that miracles happen! (The woman I interviewed with osteosarcoma for research for this book was supposed to be infertile and ended up having a baby girl in real life.)

What readers seem to love about I’m Not Her: I hear most from readers who relate to the complicated sister relationship between Tess and Kristina and how cancer (or illness) affects a whole family or community. I think people can relate to Tess and how she dealt with a tough situation.

Number of books written before this one sold:

Laura Spinella: I wrote one novel before Beautiful Disaster and three more while it steeped in a desk drawer. Everything I learned in between contributed to the end result.

How I found my agent:

Laura Spinella: I cold queried Susan Ginsburg at Writers House regarding a different manuscript.  While she was very complimentary, she ultimately rejected that book. I took a chance and sent her Beautiful Disaster, aka, my desk drawer liner.  She liked it too but also turned it down.  I emailed her one more time asking if she could offer any advice or suggest how I might improve the book.  She very graciously did. A year later I resent the manuscript and she decided to take on me and Beautiful Disaster.

Janet Gurtler: Jill Corcoran is actually my third agent. I did the old-fashioned query letter to her for I’m Not Her.

Someone who helped me along the way:

Janet Gurtler: Daniel Ehrenhaft who originally acquired I’m Not Her for Sourcebooks.

One piece of wisdom I’ve gained:

Laura Spinella: Oh, I learn something new every day about the publishing business. So far, the most important is establishing a relationship with other authors beforehand. That was an incredible waste of a valuable opportunity on my part. I should have used the nine-months prior to the book’s publication to reach out to that demographic. I didn’t realize how beneficial the support and basic camaraderie of other authors would be.

Acceptance speech—wing it, prepare it, or something in-between?

Laura Spinella: I wouldn’t dare make that assumption! Too much great competition! However, it probably wouldn’t veer too far from the acknowledgement page of Beautiful Disaster. I would add all the great book clubs who’ve read and the readers who took time to contact me personally. Of course, win or lose, I’d thank RWA for their support and acknowledgement of Beautiful Disaster.

Janet Gurtler: Oh my gosh, I totally don’t expect to win.  Have you seen the other books in the category??

What’s coming up next?

Laura Spinella: I’m currently revising my sophomore effort, The It Factor.  Rock star Aidan Royce has it all: fame, fortune and a fabulous career. The one thing he doesn’t have is Isabel Lang. She’s the girl he’s always loved, the one who left him on their wedding night, in Las Vegas.

Janet Gurtler: Who I Kissed comes out in December about a girl who kisses a boy with fatal results.

Oddest or most reliable writing ritual/habit:

Laura Spinella: I am a morning writer, 7 a.m. until noon, like clockwork.

The worst part about writing a novel:

Laura Spinella: The most unsettling part is waiting for a reaction, whether it’s an agent or editor or Publisher’s Weekly.

Janet Gurtler: The size of my butt? Okay that too, but drafting is the hardest part for me.

The part I relish:

Laura Spinella: I love revisions. I love taking something I thought was good, building on it, identifying the flaws and making it better.

How I fill my creative well:

Laura Spinella: I try not to think about it. That and you never know what a random conversation or meeting will bring.

Janet Gurtler: Exercise really helps. I get a lot of ideas and inspiration when I exercise. Also snacks.

Laura Spinella: the editoral/content manager for AuthorBytes. They’re a web developer that specializes in author websites. It’s a really fun gig. I’ve had the opportunity to chat with some pretty powerhouse authors!

Janet Gurtler:  a mom and a wife. And dog owner.

Last class I took or skill I learned:

Laura Spinella: In the past eight months, I’ve had a crash course in computer how-to, things I never imagined learning! I’m no expert, but I’m far less intimidated.

A book or author I recommend again and again:

Laura Spinella: I teach an occasional class on writing and work with a critique group.  I’m forever recommending Stephen King’s On Writing and David Morrell’s Lessons From a Lifetime of Writing.

My favorite book at age ten:

Janet Gurtler: Good lord, that was a while ago! I’d guess a Judy Blume book probably Are You There God? It’s Me, Margaret.

The RITA awards will be announced at the RWA national conference this week, on July 28. Good luck to the nominees. I’m always grateful for the time they put into these interviews, and for you, the readers who drop by.