My First Sale by Cody McFadyen 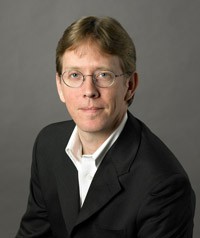 Welcome to the My First Sale series. Each Friday, Dear Author posts the first sale letter of bestselling authors, debut authors, and authors in between. Except this is Wednesday, you say. Well, yes, I double booked which means bonus for Dear Author readers. Cody McFadyen’s second book, The Darker Side, is out on the bookshelves now.

My first sale came after a long and what I like to think of (with writer’s melodrama) as bloody series of events. Events that involved violence, soul searching and screaming at the moon. Events that tested friendships and nearly broke a marriage only to truly break it later.

Why, money-troubles of course. I’m flip about it as I write this now- but maybe not really. There’s still a kind of haunting-uncomfortable-sickly feeling that comes over me when I really remember what that was like.

We’d had our own business, my wife and I, and it had been successful for some time. Unfortunately, we hadn’t read the winds of change very well. Less and less people were in need of, or demanding, our services. We started to hemorrhage money and what began as bailing out the boat with a pail turned into bailing out the boat with a shot-glass. The long slide started leading to harder and harder decisions. We had to sell our home for one, which decimated us emotionally.

We bootstrapped it, though. Neither of us had grown up in the money, so we figured we could roll with the punches. We took a deep breath and moved into a rental house, which allowed our two large and destructive dogs (thank god!) and our roommate. We were in a three bedroom home with three adults, a teenager, 2 labs, and a cat. Everybody fit. Things could be worse.

The problem was, we still hadn’t solved our financial quandaries. We were working eight to ten hours a day to keep that business going (it still produced our primary income, what there was of it) and another three or four starting a new business. We’d looked into other avenues – of course we had – but neither of us had gone the college route. We could temp or bag groceries or sell cars. We decided to keep that as the "in case of/break glass’ option.

I remember one of the worst moments for me in all of this. I had my office set up out in the garage. Not like it gets cold in California the way it does in, say, New York, but on this day it was cold enough to put some ice on the sidewalks. I could see my breath in the air as I worked. I had a space heater under the desk, and I would type on the computer until my fingers went numb. When I couldn’t feel them enough to type, I’d stick them in front of the space heater to thaw out!

None of it did much for self-esteem. It’s all well and good and even a little exciting to fight the "keep the electricity on’ war when you’re twenty. When you’re in your mid-thirties, you just feel like a loser. You’re the "path less travelled’ guy who proved the establishment right. ("Should have gotten that college degree, young man, now you’ll learn the truth of things!") Throw being a parent into this mix and "loser’ takes on whole new meaning. My best friend and I used to joke with each other about it, singing the refrain from the Beck song: "I’m a loser, baby- so why don’t you kill me." Gallows humor at its finest.

I grew up poor till I was about ten, but I was well out of practice. Besides, I wasn’t a father and a husband then. Being a screwup when you’re single is much easier on the soul.

About a year and half before that moment in the garage, or almost two years, I had written a book called Shadow Man. Someone had been showing it around to agents on my behalf. We’d been through about five agents, I believe. Most had given me good comments, and one had even given me three major critiques, and was willing to look at the manuscript again three separate times before finally rejecting me (not "it’, "me’. That’s how we writers think, whatever else we say). I’d been hopeful, but everything had started crashing down not long after. A few more rejections had driven me into a semi-apathy about the book. I’d decided I was never going to get published, and that putting my attention and effort on that was just more irresponsible dreaming. The responsible thing to do would be to buckle down and figure a way out of this mess. I could get back to the fairy-tales later. It was a very grown-up moment for me. I was very proud of myself, and explained away the empty feeling inside as the last gasp of immaturity.

In December of 2004, the long fight had gotten to a point where we were considering either the temp/bag groceries/sell cars option or packing things up and moving in with my parents while we went back to college. My parents happen to be incredible, long suffering people who would have backed this play, so I had pretty much decided to slink on home with my family and dogs in tow unless something miraculous happened.

Since I was back in the dreaming business, and hoping for a miracle, I did two things: I bought a lottery ticket, and I emailed the person who had been submitting the manuscript to agents for me. I asked if she’d give it another try. She said she would. She sent the manuscript to Liza Dawson. Lottery day rolled by with no winning numbers, but that was okay. It was more a symbolic gesture than anything else.

And then- I got a phone call from Liza. She said she really enjoyed the book and that it needed to be fixed up a little. I kind of sighed inside, having been down that road before. I was appreciative, of course, and planned to take her notes to heart. But that last hail Mary had come up short. Then she said "and I’ll send you an agreement, too, nothing major." "An agreement?" I asked her. "Yes, between us. I’m going to be your agent." I was momentarily speechless. I recovered and said something suave like: "You are?"

She was very nice about it all. I imagine she’d been down that road before. We hung up. I was sitting in the garage and it was freezing. I didn’t notice. No winning numbers yet, but I was willing to be hopeful. I hoped we could sell the book. I hope we could maybe sell it for enough to finance the move to my parents and maybe pay for community college. No, I thought, warming my fingers in front of the space heater. That’s jinx-talk. Knock on wood. Where’s the salt shaker? I sent her the following email, carefully phrased so as not to anger the luck-gods.

I just wanted to drop you a quick note. The concept of someone liking my work enough to want to represent it is akin to winning the lottery on the scale of things for me. It was a bit overwhelming, and I hope I didn’t lack enthusiasm in our phone call.

I am an optimist in all things except my own dreams. There, I tend to be a pessimistic realist. Better not to hope, etc. So I am approaching excitement about this with a lot of care.

That reservation has nothing to do with you, so if it came across – that’s the genus of it. :)

I know it’s a long road ahead, and one that doesn’t necessarily end with a book deal. But – I am very thankful for how fast you got through the book, and your very kind words. They won’t go to my head, trust me. I’ll get to work on your great critique, and we’ll see where it goes from there."

I fixed the manuscript as she’d asked, and got it back to her. She acknowledged receipt of it 28 January 2005. The first sale was to my wonderful publishers in Holland. They were there in New York and snatched it up. Liza called me with the news. Hallelujah! I thought. It’s enough for the move to my parents AND community college! Then she told me we were just getting started. By the end of the month my life had changed completely.

I know this is supposed to be about my first sale, and technically that’s a single thing. But for me, it was a lump thing. In a space of about ten days, the book sold to various publishers around the world. I cried. My wife cried. Hell, my parents cried. The dogs watched it all, mystified. Poverty had never touched their kibbles.

About five days into that ten day span, when I knew it was all real, and all really going to happen, I took a drive over to the house we’d had to sell. It was during the day, and no one was home. I stood on the sidewalk and looked at it, and I took a minute to curse myself up and down.

You see, I had decided to be a mature human being, and to put aside the dream of writing so I could save that house. If I’d hung onto the dreamer in me, and had persisted in finding that next agent, we would have been fine, and the house would still have been ours. I promised myself never to make the same mistake again.

I write almost every day now. I am thankful for it every time I sit down with my laptop and easy chair. If a day comes when no one wants to pay me to write, and I have to consider the temp/bag groceries/sell cars option again, I’ll be much more at peace with it. I got one dream to come true. Why not another? It’s not that the universe is stacked against you, see? It’s just waiting for you to get it right.

That’s what my first sale taught me, after all: dreams are always willing to come true as long as you’re willing to keep chasing them.

Cody McFadyen
The Darker Side