My First Sale by Therese Walsh Welcome to the My First Sale series. Each Monday, Dear Author posts the first sale letter of bestselling authors, debut authors, and authors in between.   This week, we are graced by three author letters.   This last comes from Therese Walsh.   Her debut release, The Last Will of Moira Leahy, is in stores beginning October 13, 2009.   Janine will be posting a review of this book shortly and it is one of Dear Author’s October recommended reads.

In July of 2008, my agent sold my debut novel, The Last Will of Moira Leahy, in a two-book deal to Random House. That’s the happy ending. But, as readers, you know that every happy ending is preceded by a testing journey and dark moment, when all seems lost. I’d love to tell you about mine.

In 2002, after years of writing children’s book manuscripts, I decided to try my hand at adult fiction: a romance. I imagined a heroine-‘a romance languages professor (Maeve)-‘and a hero-‘an antiques dealer with an English accent (Noel). I decided to begin the story at an auction house, where my characters would win something. But what? A Javanese keris-‘a sword with a wavy blade-‘was on a list of items I’d virtually gathered for Noel’s shop. That seemed interesting; they’d win that.

I wrote my first scene and handed it to a friend, anxious for her good opinion.

This? Wasn’t something I’d even considered. But that night, I did some research and learned the keris might be able to affect Maeve’s life in more ways than I ever could’ve imagined. The keris began to play an influential role in the book. Not only that, suddenly Maeve had a twin-‘Moira-‘with something to say. Music had butted its way into the spotlight, too. 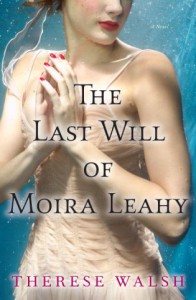 "This is a romance?" my critique partners asked on a regular basis.

I was no longer sure what it was, but I pressed on, finished the draft, and in late 2003 set out to find an agent. I sent queries; I received rejections. Most were the professional equivalent of "Nice writing, but WTH is this?"

It wasn’t until agent Deidre Knight read my story in early 2004 that I received some helpful advice. There was good news:

"There’s an air of mystery here–almost a gothic kind of feeling to the hush over the story- -that I think gives it a real magic."

And there was not-so-good news:

"I could be totally wrong, but it almost has a kind of women’s fiction feeling to it, and yet it’s a romance. My gut tells me you probably have a part of you that either wants to write women’s fic, or that ultimately *will* write women’s fic."

I remember that hot-grief moment so well, because I knew then that Deidre was right. I’d created a square peg. It would never fit in-‘not unless I changed its composition dramatically.

In 2005, I threw out all but two scenes and began again. I needed to expand on Maeve’s story, keep Noel but learn more about Moira, go deeper with the keris, re-envision everything.

Yes, I questioned my sanity. What were the chances that I’d ever really be published? But I kept writing and revising because I loved the characters. To ignore them would be like knowing a beloved lay bleeding in a ditch somewhere, when I was the only one who could save them.

I promised you a dark moment, when all seemed lost. Here it comes.

I finished polishing my story in early 2008, knowing it was my best work, and again set out to find an agent. I was shocked when an Important Agent requested my manuscript straightaway, and far less so when he rejected. But he was nice about it. When I asked if he knew anyone who might connect with the work, he named someone within his agency but said she rarely accepted new clients.

Not a lot of hope there, but I wrote a new query, printed another synopsis, mailed my submission. Soon after, Busy Agent’s assistant asked for a partial, then the full.

And then, the strangest thing, I was contacted once again by Important Agent.

"Your story made our assistant cry," he said. "I’m going to read the full and reconsider. Stay tuned." Later he emailed me, "Call me. I’d like to talk." He sent his number.

Now I knew this wasn’t the way it was supposed to work. When agents loved and wanted to represent you, they called *you* to tell you. But this was Important Agent. Maybe he did things differently.

I was nearly bursting with hope when I called, which should’ve been a warning sign; you know what happens with things that want to burst.

"I’m not going to tell you what you’re hoping for," he said. "Really, I have a lot of questions."

He did have questions, but he also had a lot to say. Unless the story was heavily revised, it was-‘in his esteemed opinion-‘unpublishable.

That word possesses a thud-like quality, doesn’t it? If ever there was a time I wanted to toss my manuscript in the trash and pretend I’d never dreamed a dream, it was then. Because if he was right, and my story was that flawed, then my gut was flawed-‘and if you can’t count on your gut, it’s time to hang it up.

The weirdest thing happened then. Somewhere from deep inside my little old self, a voice peeped up, shy at first, weak, then stronger-‘like the stale and tiny heart of the Grinch swelling to life inside his otherwise vacant chest after he had a realization. And my book-‘it was like Christmas. It was there, and it had come, and I believed in it.

I remember telling my husband in our kitchen: "No, he’s wrong. Important Agent is wrong. The story is solid, it’s ready. You’ll see."

And you know what happened next: I wrote a new query, printed another synopsis, mailed my submission to another agent-‘Elisabeth Weed. And she asked for the partial and then the full, and called me herself to tell me she loved the book. She became my agent, and she sold my book to Random House in a preemptive two-book deal. And I don’t tell you that to brag. I tell you that because I know that you, dear readers, will appreciate a happy ending that proves something we all need to hear: Never, never quit on your dreams.

FTC Advisory Warning: Therese Walsh’s book was provided to the blog by someone (I can’t remember who sent it to us) either the author or publisher. No payment was made for this blog post. By posting this first sale letter, we are not endorsing the book or the author of the post.   We do endorse that First Sale letters are fun to read though.