My First Sale by Terri DuLong

Welcome to the My First Sale series. Each Monday, Dear Author posts the first sale letter of bestselling authors, debut authors, and authors in between. Terri DuLong’s first book, Spinning Forward, is in stores on Tuesday. 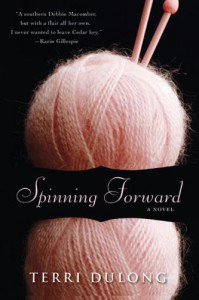 The older I get, the more I realize that I’ve always been a late bloomer. At age 25 I was divorced, a single mom with three children-‘and not much of an education. So I joined the ranks of college kids much younger than I and ended up earning a degree in secretarial science. I remarried, worked as a legal secretary and at age 34 discovered I would bloom once again-‘graduating from college a few years later as a Registered Nurse.

During all of these years, I wrote. No, I didn’t write for publication. I wrote because I had to write. I had been writing all of my life-‘volumes of pages to pen pals around the world, diaries and journals. Writing was my passion but never once did I consider that it could also be a career.

Like my mother, I’ve always been an avid reader, and it was my mother who provided stacks of books to keep me entertained on those cold, snowy, New England weekends. I was an only child and lacked siblings, but I never lacked friends thanks to those stories. During those years of raising my own children, I devoured the women’s fiction novels my mother would let me borrow-‘Barbara Taylor Bradford, Belva Plain, Susan Howatch, Rona Jaffe and many others.

By the time I was working as a critical care nurse in the Boston area, my youngest child was 15, and I was beginning to seriously focus on my writing. My life experiences contributed to this new phase in my life, but along the way I had also taken a creative writing course at college the summer after my 95-year-old grandmother passed away. She had come from Poland through Ellis Island to Salem, Massachusetts, in 1908 and I had a story to tell. That was my first attempt at a manuscript and nothing breeds success like success. My professor critiqued the first three chapters and said she could feel the story pouring out of me. The praise and encouragement she gave me pushed me to finish the manuscript. Finish it I did, but I put it aside a year later when my husband was transferred to Florida with his job.

I quickly realized that while I loved to write, I had no knowledge of the book industry itself. I also needed to learn much more about the craft of writing. I began attending writers’ conferences throughout the year. Eventually, I was asked to write travel articles for Bonjour Paris based on my many trips to Paris and throughout France-‘but through the eyes of a fictional canine character. It was a challenge and the positive feedback from readers made me decide to attempt another novel. Rejections arrived-‘but I still kept writing.

When my husband retired four years ago, we moved to the very small island of Cedar Key, off the west coast of Florida. I knew I was in my element. It didn’t take long before the quirky and lovely characters in my small town and the beauty of the island itself inspired me to write another manuscript. More disappointment followed-‘this time in the form of agents, but I never gave up. I couldn’t. I strongly believed in my story and my characters and felt eventually somebody else would also.

I had been a member of Romance Writers of America for seven years and decided to attend the conference in Dallas two years ago. I attended the panel for Kensington Books and heard the editor say she was looking for women’s fiction. When I returned home, I sent her the first three chapters of my Cedar Key story. Five months later I received an e-mail from her assistant requesting a full manuscript. It was the closest I’d come to acceptance from a traditional, New York publisher, but disappointment had taught me to simply let go and just keep writing. Two months later, I was pretty convinced that the Kensington exchange was just another disappointing interlude in my pursuit of becoming a published author.

Then in late February of 2008, an e-mail arrived from that very same Kensington editor saying she had good news-‘she wanted to offer me a two-book contract and would it be convenient to call me later that afternoon. Yes! After such a long, circuitous route, I finally had gotten the call! And earlier this year my editor phoned again-‘this time to offer me another contract. I’m now writing a Christmas novella in an anthology headlined by Fern Michaels, coming November 2010, around the same time as book number two in my Cedar Key series.

So, yes, I may be a late bloomer who has dodged her share of rain along the way, but I’m also a firm believer that it’s the rain that fell that ultimately enabled me to bloom, to grow and to develop into what I was meant to become: a published author.