My First Sale by Tasha Alexander, Wherein Doing Rather Than Talking Turns into Bestselling

How many authors have a book with the gorgeous Cate Blanchett looking queenly with the words “Woman Warrior Queen?” 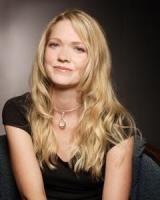 None other than the equally gorgeous Tasha Alexander whose first love was Little House on the Prairie books. Alexander says in her bio that she became “an English major in order to have a legitimate excuse for spending all her time reading.”

Jayne is grateful for that choice because it ultimately led to Alexander writing some fantastic period mysteries. She has reviewed Alexander’s first two novels featuring young Victorian widow, Emily, and her instinctive mystery solving abilities : And Only to Deceive and A Poisoned Season. Alexander is a powerhouse of historical writing that brings to life the period drama that we hunger for when reading about those past glories.

I’ve wanted to be a writer since I was a little girl, obsessed with reading and re-reading the Little House on the Prairie books. I wrote a number of very well-received short stories. Well-received, that is, by my parents. "The End Piece of Bread" is the only one I remember, and really, it’s best forgotten. I’d make little books, bind them with yarn and write Harper & Row on the covers, because Harper & Row were Laura Ingalls Wilder’s publisher.

In college at Notre Dame, I majored in English. Not because I wanted to study writing, but because I wanted to read. Talk about a great racket: Spend all your time reading, get a degree. There was a low moment, in an American Literature class where I got a bad grade because I’d actually read every bloody word of Moby Dick instead of watching the movie, but other than that, they were fantastic reading years.

But then I graduated, and life got in the way. Writing didn’t seem a practical way to make a living, so I pushed it most of the way out of my head. My husband was in graduate school, so I worked a string of jobs: coordinated events for a hotel, ran a temporary service office in Laramie, Wyoming, was a pharmaceutical rep (and once ran my company car off the road to avoid a moose). Every once in a while, I would think about writing a book. On good days, I’d even sketch out story ideas, maybe write a couple of paragraphs.

It was only after my son was born that I got serious. When he was little, we were living in New Haven, Connecticut, in the attic apartment of a fabulous Victorian house. My husband was doing post-doctoral research, so we were scrimping to get by. Scrimping meant no babysitters-‘so I was a full-time mom. Spent a lot of time reading in parks after walking to the library and filling the stroller basket with books. And one, day, while reading Dorothy L. Sayers’ Gaudy Night, I was struck by a sentence:

If you are once sure what you do want, you find that everything else goes down before it like grass under a roller–all other interests, your own and other people’s.

This hit me like the proverbial brick wall. I’d been saying for so long that I wanted to be a writer, but how could I possibly have time to write a book when I was taking care of a baby, or working full time, or when the muse wasn’t singing or whatever it is muses do? I decided then and there that I was going to write a book-‘the kind of book I would like to read. And if I didn’t finish it, I’d have to stop telling people that I wanted to be a writer.

That day, I started work on what became my first novel, And Only to Deceive. I wrote any time I could steal even a few minutes for myself, and learned that you can accomplish amazing things in short blocks of time. I became more disciplined than I’d ever before been in my life, and after two months, I had a draft of a novel that included lots of my favorite things: Victorian England, art forgery, dashing gentlemen, gorgeous gowns, ancient Greece, and Paris.

Now, being both clueless and naÃ¯ve, I had only the most vague ideas of what to do next. I’d received positive feedback from my beta readers and knew I needed a literary agent, but wasn’t sure where to start. Eventually, after a lot of Googling, I queried Anne Hawkins at John Hawkins and Associates. I’d fallen in love with the agency after learning they had represented Willa Cather and Jack London. So I shot off an email query and decided I’d wait to hear back. Not a course of action I would recommend-‘you really want to cast a wide net and can wait a long, long time to get a reply-‘but I didn’t know any better.

And I was lucky. Really, really, extremely, preternaturally lucky.

Did I mention it was St. Patrick’s Day? Seriously.

I took my son to the park, and returned about an hour later. Anne had replied-‘she loved my query, loved the opening of the novel (which I had copied and pasted into the email)-‘and wanted to read the full manuscript. I FedExed it to her the next morning, and we talked two days later. After some revisions, the book went on submission and sold about two weeks later.

When the call came, I had just got out of the shower, had some sort of mask smeared all over my face, and was trying to hold onto a towel that wouldn’t stay put while I was frantically scratching notes on the back of an old envelope (no cordless phone; I was trapped). Not that any of it mattered. My book was getting published! And the offer came from William Morrow, an imprint of HarperCollins. It was as close to my little girl dreams of Harper & Row that a person could get.

As an aside, I love Alexander’s website. It’s got a great bold color scheme that is easy to load and read and has just the right amount of extras including an entire section of pictures and links that enhance the reader’s understanding of Emily’s world.