My First Sale by Rob Thurman Welcome to the My First Sale series. Each Friday, Dear Author posts the first sale letter of bestselling authors, debut authors, and authors in between. Rob Thurman writes urban fantasy for ACE.   Her current release, featuring the Leandros brothers, is in stores now. Deathwish made it to #26 on the NYT Bestseller list.   In the fall, Thurman will release a new series with a female protagonist.   Stay tuned.

When I received the call about my first sale I was just pulling into the parking lot of the theater to see Shrek 2, which was a dicey situation. A huge burst of pleasure like selling your first book combined with that movie, it could have led to an obsession with talking cats in thigh high leather boots. Fortunately, that didn’t happen-and dreams don’t count.

But before that, I first wrote a mystery, not so much because I was a big fan of mysteries overall, but of a particular subset of mysteries: the buddy/buddy genre. It didn’t sell. And in retrospect as it was my very first attempt at a full-length bit of writing, it probably sucked quite egregiously, and I’m better off. So, with my second attempt, I went back to what I was currently reading at the time-‘urban fantasy. In my life I’d read nearly anything I could get my hands on. Mystery, romance, science fiction, fantasy, horror. And it was with urban fantasy that I found I could do all those things in one. I could have fantasy, mystery, humor, romance all combined in one giant casserole (microwave since I don’t cook) and served up on a non-silver platter in deference to the vampires and werewolves. And that’s when I wrote the book I always wanted to read. I didn’t want to write a book where the reader had to wait for the good parts. I wanted it to be all good parts. No slow moments, humor to lighten the drama, enough angst to choke a horse, a happy ending, and a rollercoaster ride from beginning to end. 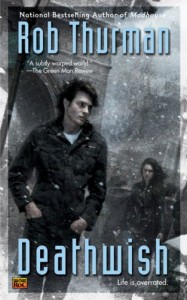 In theory, fantastic-in reality, I was in for the long haul. Nightlife was rejected by every agent in the country and then by every publisher. I once thought I wouldn’t be able to handle the business because of the rejection. Someone taking my work and ripping it to shreds, who could survive that? After two years, I would have loved for someone to tell me in all the ways the manuscript was wrong, wrong, wrong, against nature and man, and should be destroyed before its very existence sent the earth spinning out of orbit and into the sun. All I ever received was form letter after form letter. I could wallpaper my basement in all the form letters that came my way. But I did also receive two letters, one from a small publishing company that only published five books a year and one from a large publishing house’s children’s department (where somehow my manuscript was misdirected.) Both loved Nightlife and said that, although they weren’t capable of taking it or that obviously it was not a children’s book, to please not give up. Two years after I started with the help of friends and family (their typing fingers still haven’t recovered), an assistant editor became an editor, remembered Nightlife, and this time was in the position to do something about it.

When she called me in that parking lot, the first thing she asked was I the type of author who refused to change a single word of their work (two years ago I would’ve said yes) or would I be willing to make a revision or two. What I said, so very casually, was I’d be willing to work with her on the issue, certainly. What I thought was, "If you publish my book, you can have a seven foot tall drag queen with better cleavage than mine, kick ass stiletto heels, and absolutely fabulous hair paddle me with a tennis racket right here and now. Do you want me over the hood of the car or over the trunk?’

Now four books later the checkerboard pattern on my gluteus maximus is barely discernable and my phobia of all things tennis related improves daily. But more importantly I was able to write the book that I’d always wanted to read and discovered your book can be different from most and still find a home-thanks to one editor willing to take a chance.

I’d kiss her feet if only she didn’t walk so fast.

→ Jane
Previous article: Borders and St Martin’s Press Helping Us Save the Contemporary
Next Post: REVIEW: Scandal by Carolyn Jewel