My First Sale by Phillipa Ashley Welcome to the My First Sale series. Each Monday, Dear Author posts the first sale letter of bestselling authors, debut authors, and authors in between.   Today’s first sale story is from Phillipa Ashley who studied English Language and Literature at Oxford before becoming a freelance copywriter and journalist.  Dating Mr. December (called  Decent Exposure in the UK) was the basis of last year's Lifetime TV Movie "The 12 Men of Christmas." A frequent guest on BBC national, local and independent radio on all matters romantic, she lives with her husband and daughter in Staffordshire, UK. You can visit  http://phillipa-ashley.com/, follow her on  Twitter or find her on  Facebook.

When I'm asked about my first sale I always feel a bit of a fraud. I've always been a "writer" but until a few years ago, I'd hardly written a word of fiction.

I devoured books at school but I was never a big one for making up "stories." Don't get me wrong, I adored writing but when it came to school essays and exams, I always took the "descriptive" route. Or I'd make up little magazines about places I'd been on holiday and illustrate them myself. 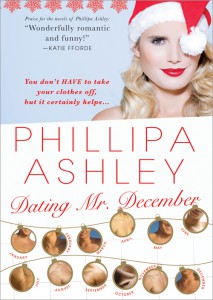 With the support of a wonderful English Lit teacher, I got a place at Oxford University where I spent three years studying the classics. If I'd ever dreamed of writing my own novel (and I didn't), reading "the greats" intimidated me completely. Why would I write a novel, I reasoned, if I couldn't be Jane Austen?

After I left university, I turned my factual writing into a career and became a freelance copywriter and journalist.

Then, in 2004 I watched a BBC TV miniseries called North & South and my world changed overnight.

I was so inspired by that series I had the irresistible urge to write a modern version of the story. I shared my "fanfic" with an Internet creative writing group where someone told me that I'd written a romance.

That was it. I set about reading hundreds of romances. Soon, I was completely obsessed with writing. I felt that a whole new dimension of my life, hitherto invisible, had suddenly opened up.

I joined the Romantic Novelists Association and devoted myself to learning as much as I could about romance writing. I found I liked writing sexy, funny, fast-paced stories and I didn't have to be Jane Austen to entertain myself and other people.

I started a novel about a London PR girl who "helps" a mountain rescue team raise funds for their new base by persuading them to do a nude calendar. Not everyone wants to be helped-‘especially a certain Mr. December.

After a year of rewrites and revisions, I'd finished the book and a writer friend persuaded me to send it a London literary agent.

As soon as I'd sent the email, I regretted it. Maybe, I thought, I'll just be ignored, or get a polite rejection or even a few nuggets of encouragement.

A couple of weeks later, the agent wrote back. She'd been "gloriously entertained," she said (that's a London lit agent for you, bless them) and added: "I'd love to see more."

Luckily for me, she liked the full and sent it to Little Black Dress; a sassy new romance/chick lit imprint that she thought would be perfect for my book.

Then one afternoon, I got The Call with a two book offer. I remember saying: "Can I tell my daughter?"

At which point I burst into tears and so did my agent.

Dating Mr. December (titled Decent Exposure in the UK) went on to win the RNA's New Writers Award and was made into the Lifetime TV movie, "The 12 Men of Christmas," in 2009.

Now Sourcebooks has published it in the USA-the first of four of my contemporary romantic novels. Wish You Were Here will be in stores in Spring 2011!

If my friend hadn't made me send it to my agent, it would still be lying on my computer and I wouldn't be here at Dear Author-