My First Sale by Pam Jenoff Welcome to the My First Sale series. Each Monday, Dear Author posts the first sale letter of bestselling authors, debut authors, and authors in between. Pam Jenoff is our guest today.   Her latest book, Almost Home, is in stores now.

It was late one Friday afternoon in April 2005, and as I sat in my office at the large Philadelphia law firm where I worked a mid-level associate, I was surprised to see my agent Scott's phone number pop up on my caller identification.   To that point, Scott and I had communicated almost exclusively by e-mail, so I figured that the news could not be good.

The road to publication had to that point had been littered with potholes.   I'd decided almost four years earlier, in the wake of September 11th to get serious about my rock star dream of becoming a novelist.   I'd taken an evening course at a local university called "Write Your Novel This Year" (the course is now called "Write Your Novel This Month" – seriously– and I don't think I could have taken that course; I would have been too intimidated.)   I'd finished my first manuscript, THE KOMMANDANT'S GIRL,   in a year, writing from 5-7 in the morning as I worked fulltime as an attorney, gotten it into shape and queried about a hundred agents.   I signed with one purportedly reputable agent who proceeded to send out the manuscript to about twenty publishers without speaking to them about it first and then bill me a fortune for postage and copying.   Meanwhile, Scott Hoffman, a then relatively new agent who had kindly been giving me lots of free advice, agreed to take on my manuscript if I would make extensive changes.   So I left the first agent and spent months reediting the manuscript.   After several rounds of revisions, we were finally ready to hit the market. 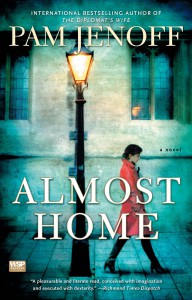 But even with Scott's magical editing touch and formidable sales ability, the manuscript sat untaken.   By the summer of 2004, we were rejected by 39 publishers (including those sent out by agent number one) and there seemed to be nowhere else for the book to go.   So Scott said, "Write another book, we'll sell that one first and then sell THE KOMMANDANT'S GIRL with it."   There is nothing, I think, more disheartening to an unpublished author than being told to start all over again, knowing how much work goes into a novel.   But I had no other choice; I wasn't going to give up on the dream.   So I began diligently working on the manuscript that would ultimately become ALMOST HOME.

Eleven months later, April 8, 2005 to be exact, Scott called.   My question as to whether he was firing me seemed a fair one, given that my first novel had been dead on the shelf for almost a year.   After all, agents get paid on commission and why should he stick with me when my book wasn't selling?   "

But he reassured me that he was not.   "Are you calling to yell at me for not finishing the second book?" I asked then.

"No," he said.   "I'm calling to tell you that I sold the first one."   I was shocked – I didn't even know that we were still out on submission.   And it turned out that one publisher had been holding onto the manuscript for almost a year and finally decided to make an offer.     Given the lack of competing interest or offers, the deal was very small and THE KOMMANDANT'S GIRL seemed destined for obscurity.   But within two years, the book had been selected by Barnes and Noble for their online book club, received a starred review from  Publishers Weekly and a Quill nomination for best romance.

So when an aspiring author expresses frustration at rejection and feels as though he or she has exhausted all options, I tell the story of my four years and 39 rejections on the road to publication.   It wasn't easy to take, but it was all part of the process to get where I am today, and I consider myself proof that it is possible for anyone.   You just need to keep going and have a few key people believe in you.