My First Sale by Margo Maguire Welcome to the My First Sale series. Each Friday, Dear Author posts the first sale letter of bestselling authors, debut authors, and authors in between. Margo Maguire writes historical romances for Avon. Her fifth Avon book, Wild, is in stores now.

Wild, is in stores now.

My road to publishing was not exactly the norm. In fact, I didn’t set out to be an author at all, and even after I started writing seriously, none of my walls ended up being papered with rejection letters. I sold the first book I ever wrote.

Now, before you get upset with me, allow me to explain.

My mother was a teacher, English being her primary subject, although she had a Master’s degree in Special Education. Because of her, my siblings and I were well-read, and used very good grammar all our lives. But I didn’t follow in Mom’s footsteps. I became an RN instead, and worked for many years in the Intensive Care Unit of a major receiving hospital. And for a change of pace, I went back to school and got another degree in a subject that had always interested me – history, although I didn’t really think I’d make a career out of what I’d learned. Little did I know …

When I worked the afternoon shift in ICU, I found it impossible to relax and go to sleep after eight or twelve hours in the unit, so I started writing in order to de-stress. After about a year, I had a complete historical romance novel that I thought was pretty decent. My kids were older and I was ready to go back to work full time, so I decided to see if I could get my work published – to try for a career change. 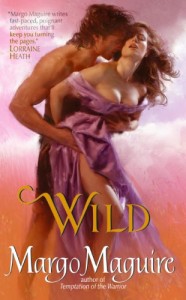 On February 10, 1998, I mailed the manuscript (entitled The Rescue) to Harlequin Historicals in New York. On February 20th, I received a call from Harlequin, saying that they loved The Rescue and wanted to buy it. They also wanted to change its name – so that book was released in March of 1999 as The Bride of Windermere. I wrote another nine books for Harlequin and then switched to Avon. (And in the meantime, there have been plenty of proposals rejected by my various editors over the years).

I am pleased to say that my fifth book for Avon – Wild – was released just this month! And though I actually miss the pace and the adrenalin rush of the intensive care unit, I think I’ve found my niche.