My First Sale by Mandy Hubbard Welcome to the My First Sale series. Each Monday, Dear Author posts the first sale letter of bestselling authors, debut authors, and authors in between.   Mandy Hubbard‘s novel Prada & Prejudice is in stores now.

In late 2005, I heard about a write-for-hire piece at a major publisher, so I sent them a proposal. They sent me a revision letter. I remember laughing out loud and actually dancing in my kitchen with my dog, like a revision request was the best thing since sliced bread, and it meant I was going to make it.

A month later, I was rejected.

Fast forward to 2007, when my agent was submitting a little book called PRADA & PREJUDICE. Much like my first ill-fated novel, rejections poured in.

After a half-dozen or so, I received a revision request from Lexa Hillyer at Razorbill. So, although I did not dance with my dog this time, I revised it.   She rejected it. Saddened, we moved on. 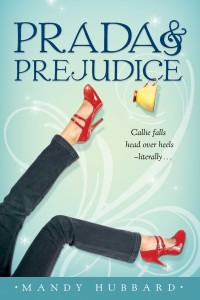 By the time we hit rejection 20, I was more than a bit disenchanted. It had been over a year of submissions and multiple revisions. Draft 7 went out to a single editor, who requested-‘you guessed it-‘revisions. HUGE ones.

I did not dance with my dog this time, either. And while I questioned my sanity,–knowing this manuscript may get rejected and never go anywhere again after twenty-two tries–I opened up a word doc and started over from scratch, and wrote draft 8 without lifting a single word from draft 7. With the help of critique partners and my agent, I turned it into a much more polished Draft 9.

You probably know what comes next: rejection. Luckily, despite 22 rejections at this point, my agent wasn’t willing to give up. We put our heads together and came up with some new ideas, and she sent it to seven houses. If this didn’t work out, I’d have nearly 30 rejections, and it would be time to retire it.

Two weeks later, everything changed. Word came in the form of an email, not a call. When I opened that email titled GOOD NEWS, I had low expectations. I figured, hey, maybe someone is getting second reads! We’d been down that road many times, with no contract in sight. But the words in that email said things like "heated interest" and "expecting multiple offers."

26 rejections, 18 months, 9 drafts, and multiple offers. Someone was talking to me-‘a coworker-‘but I couldn’t even talk, let alone breathe.

The actual call came a week later, saying those two offers came in. And guess who one of them came from? Lexa Hillyer, at Razorbill. After reading three versions, she offered. The book hits shelves June 11, 2009, followed by a second YA due out Summer 2010, and a Harlequin/Nascar novella in June 2010.