My First Sale by Lois McMaster Bujold, She Got By with a Little Help From Her Friends 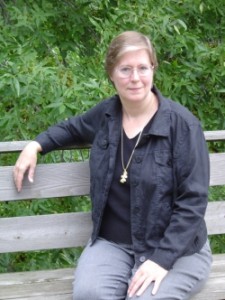 When Lois McMaster Bujold agreed to write a first sale letter for the blog, I almost fainted with delight. I started reading Ms. Bujold at the beginning of her Sharing Knife series despite hearing about how fantastic her Miles Vorkosigan/Naismith series. I was intimidated by the size of that backlist even though I found Bujold to be a sensitive and gifted writer.

I finally broke down and bought Cordelia’s Honor after the wonderful guest review by Elizabeth and was converted. When Ned came nosing around for something to read, I gave him the book and he was converted. He’s reading his way through the series (currently at Brothers in Arms) and says that he is really into it. I keep asking him if we can buy the Lego Space series set and shoot a little Miles V video.

Bujold’s latest release is the Sharing Knife: Passage and will be on bookstore shelves on April 22, 2008.

Well, my first sale ever was a short story to Twilight Zone Magazine, towards the end of 1984. The news arrived as a typed postcard fallen down to the bottom of my mailbox, and the excitement and validation helped power me through writing my third novel (which was Ethan of Athos) in 1985. But the first big sale came that October, just about a year later.

I’d begun the book that was to become Shards of Honor back in late 1982, inspired by the example and with a lot of help from my friends Lillian Stewart Carl and Patricia Wrede. Just six weeks after I finished it in the fall of ’83, I started its sequel, The Warrior’s Apprentice. I was living the isolated life of a stay-at-home mom with two pre-school children in a small rustbelt town in Ohio, but was able to send carbon copies of my laboriously typed drafts to Dallas and Minneapolis, respectively, and get chapters to critique in return. These friendships were lifelines in every sense. As each manuscript came off the boards it started on the painfully slow process of submission to mysterious, scary New York.

When The Warrior’s Apprentice came back from its third rejection, Lillian suggested I try it on Betsy Mitchell at Baen Books, because Lillian had met this editor at a convention and thought she would at least give it a helpful read. I’d never before heard of Baen — the company was in fact only two years old at that point — but I composed a cover letter mentioning the other two books, trying not to sound as desperate as I was, and sent it off.

And one afternoon in October of ’85 Jim Baen called me and offered on all three books. I was in my kitchen in the midst of I-don’t-remember-what, and was thrown into a loop by this call. I’d been expecting a letter, if anything. (Later, I learned that good news in publishing often comes by phone, for what are upon reflection obvious psychological reasons. This was in the days before e-mail, mind.) I hadn’t even known there was a Jim Baen — the only name I’d heard was Betsy’s. The mental picture I immediately built up of him had not much to do with reality, I’m afraid. I didn’t even exactly know what a publisher was or did, although I vaguely understood the functions of an editor. I had yet to learn that a publishing company could consist of as little as half a dozen people, a rented office, a phone and fax line, and a bottle of Maalox, and was more inclined to picture poor Jim as something like Sauron in the tower of Barad-dur. The conversation that followed may well have been nearly as confusing to Jim as it was to me, but we got through it somehow, after which I lay down on my yellow linoleum and hyperventilated a bit.

I had actually temporized during the call, unable to believe this wasn’t some sort of faerie gold that would vanish in the morning, and full of paranoias about publishers and publishing garnered from the usual gossip inflicted upon newbie writers. I followed it up with a flurry of phone calls to the few people I knew who knew anything about publishing, or Baen. Fortunately, the upshot of it all was for me to accept the acceptance — that must have been a phone call too, but not one I now remember. I do remember I had to write and pull the manuscript of Ethan from the slush pile in which it was then languishing; I think Shards was free at that point.

I didn’t tell my parents or my extended family about it till Thanksgiving, when the contract had finally arrived to make it all seem more real. I had scripted in my head a sort of Hah! Now see! announcement for dinner, but my daughter let the cat out of the bag prematurely. The advantage of fictional people is that one can actually use the dialogue one makes up. This never seems to work with real ones.

I didn’t get an agent till several books later, but the delay did me no harm. The agent I finally shook hands with at Nebula Weekend in New York in the spring of ’89, Eleanor Wood, was one of the best, and I’d learned enough about the business by then to have at least some dim appreciation of the fact. Nineteen years later (yeesh, has it been that long already?) we’re still together.

For another great interview and review with Lois, you can visit fantasy book critic.