My First Sale by Laura Kinsale 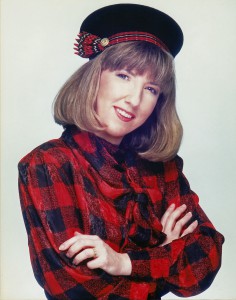 Welcome to the My First Sale series. Each Monday, Dear Author posts the first sale letter of bestselling authors, debut authors, and authors in between. Laura Kinsale writes historical romances and her latest release, Lessons in French, is in stores now.

First sale, huh?   It was a looong time ago.   But one doesn’t forget that sort of thing.   I can still remember the large manila envelope with my own handwriting on it, addressed to me, lying on the dining room table.

I’d sent out about ten of these, a synopsis and three chapters, and all of them had come back just like this–the manuscript stuffed into my SASE, with a brief cover letter or card saying, “We’re sorry to inform you…”   Sometimes there was one line scribbled on the page, a note from the editor saying the idea was too overdone, or some other reason for the rejection.   (In hindsight, I know that these short personal notes were a positive sign, but at the time they didn’t mean much to me beyond “No”.)

This proposal was the last one to be returned.   It was from Avon.   I opened it a crack, pulled out the letter and saw those words in the first paragraph:   “I’m sorry…”

I was so depressed that I just shoved it all back in the envelope and didn’t even bother to read the whole letter.   It sat there on the table for several weeks.   Eventually I had to clear the table (does this suggest anything about my housekeeping?) and pulled out the manuscript in preparation to toss it.

I realized then that it was rather a long letter, for a rejection.   A whole page long.   I don’t remember the name of the editor who wrote it, I’m sorry to say.   But it gave some commentary on the proposal, suggested some changes and asked me to revise and resubmit.

Whoa.   And I’d let it sit there for weeks!   The delay may have worked for me, though, because meanwhile a change had taken place at Avon.   The editor who’d written me had left, and Ellen Edwards had come on board.

As is common with editors newly arrived at a publisher, Ellen was looking for some unknown writers to develop for her own stable.   Lucky for me, my revision arrived at just the right time to catch her eye.

She called and asked me for the rest of the manuscript.

This is where my first sale story becomes a bit unusual.   I had a bad habit of starting books, writing about seven chapters, and then deciding some other story sounded more interesting.   I never wrote a synopsis.   I knew enough to know this was a bad habit.   So I’d decided, as an exercise, to put together a proposal–3 chapters and a synopsis.   Once I’d done that, I figured (naively) why not send it out?

There was no “rest of the manuscript.”   I had already sent them most of what I had.

At this point, Ellen would have been forgiven by every editor in New York for hanging up on me.   But instead of telling me to finish and submit again, which is what I frankly deserved to be told, she asked if I could write a love/sex scene as an example of what I could do.

For the first and only time, I had to go forward in a book and a story I had no idea about, and write a scene.   So I wrote a scene on a tropical island, but it was in a tent, and rain was pouring down.   I sent it back to Ellen, and they offered me a contract, and a deadline, for the book which became THE HIDDEN HEART. 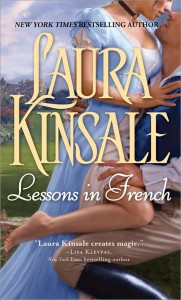 I guess I did it.   I must have!     I can remember writing toward that scene on the island, as if it were a lighthouse in the dark.   I’d never finished a book before.   The subsequent plot has often been observed to be “globe-trotting,” if not a bit wonky, to put it politely.

But I have Ellen Edwards and her faith in me to thank for becoming a writer.   I’m not sure I ever would have finished a book if I hadn’t had that scene and that contract to propel me past Chapter Seven.

Funnily enough, I’ve never been able to do that again: write a scene way ahead in a book and fill in the middle.   I wish I could, as it worked pretty well that time.

Laura Kinsale’s unique and powerfully written love stories transcend the romance genre. In this, her first new book in five years, she delivers a poignant, funny, sexy, Regency romance sure to delight her many fans and attract a whole new readership.

Trevelyan and Callie are childhood sweethearts with a taste for adventure, until the fateful day her father discovers them embracing in the carriage house and, in a furious frenzy, drives Trevelyan away in disgrace. Nine long, lonely years later, Trevelyan returns. Callie discovers that he can still make her blood race and fill her life with excitement, but he can’t give her the one thing she wants more than anything-‘himself.

For Trevelyan, Callie is a spark of light in a world of darkness and deceit. Before he can bear to say his last goodbyes, he’s determined to sweep her into one last, fateful adventure, just for the two of them.

Laura Kinsale, a former geologist, is the New York Times bestselling author of Flowers from the Storm, The Prince of Midnight, and Seize the Fire. She and her husband divide their time between Santa Fe and Dallas. For more information, please visit www.laurakinsale.com or follow her on Twitter, @LauraKinsale