My First Sale by Larissa Ione Welcome to the My First Sale series. Each Monday, Dear Author posts the first sale letter of bestselling authors, debut authors, and authors in between. Larissa Ione is currently working on the bestselling Demonica series, an over the top, crazy, action filled and sexy take on paranormal romance. Her latest entry in the series, Ecstasy Unveiled, is a February Dear Author Recommends.

This is sort of my second "first sale" story here at Dear Author. I know-how did that happen, right?

See, three years ago, my first Sydney Croft book released, so my writing partner for the Croft books, Stephanie Tyler, and I talked about that sale, because it was our first.

It was our first single-title sale, but just weeks before that- (queue tinkly dream-sequence-flashback sound effects) 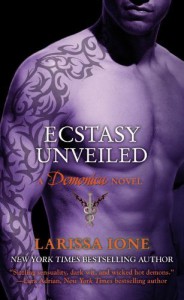 Hurricane Katrina had really messed up my life. We lost everything, and my son and I were living with my parents in Washington state while my husband stayed on his Coast Guard boat in Mississippi where he was still stationed. I'd gotten back up on the writing horse, and was working on the Croft project with Stephanie, and trying to figure out what I should do on my own.

Several months earlier, I'd entered a short story in the Kensington Brava contest that was judged by Kate Duffy. I did very well in the contest, but didn't win. Still, Kate called to discuss what she liked and didn't like, and offered to take a second look if I revised.

But after Katrina, Kate, who was an incredibly generous person, offered a full manuscript critique to the high bidder in an auction that my friends and colleagues put together to benefit me (to this day, I still tear up when I think about how the romance community rallies when things get bad.)

I emailed her to thank her, and to my surprise, she asked for my phone number. Then she called, and we talked (well, I mostly babbled like an idiot) for nearly an hour about writing, the projects I had on my hard drive (I had evacuated with my laptop, thankfully) and she asked me to send her something.

She also told me to submit that novella she'd rejected to another publisher, because she believed it would sell. It wasn't right for her, but she knew it was right for someone.

So I sent her a proposal, and I'll never forget her words: "Damn, girl, you can write! But you can't plot for shit!"

Anyway, she didn't buy that story either, though she loved it, and she spent another hour talking to me to help me work out the plot issues. She believed in me, believed in my writing, and told me I'd better not ever give up. I said I wouldn't, and I told her that someday, I would sell something to her.

Not long after that, I got The Call. No, not from Kate Duffy at Kensington, but from Red Sage. They were who I'd sent that novella manuscript to. It was a Saturday, and on Monday I called Kate and told her I'd sold.

I seriously think she was as happy as I was.

So that was my first sale. Flesh To Fantasy

And you know what? I did sell to Kensington. A few months ago, just before Kate passed away, I was invited to write a novella for them for inclusion in an anthology. Though Kate wasn't the one to buy it, I somehow think she had a hand in it.

Just like she had a hand in my very first sale.