My First Sale by Lara Adrian, Learning How to Make Lemonade Out of Lemons 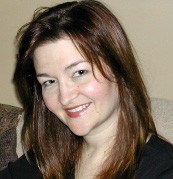 I get a lot of phone calls from people who have been fired, distraught and unable to visualize what could possibly come next. I tell them, each one of them, I am sure that they will look back and say that was the best thing that could have happened. Lara Adrian suffered something akin to a termination. After three contracts with Ballantine, word came that she was not going to be offered another. Her career appeared to be over. But, it was the best thing that could have happened to her because Adrian created a new series in late 2005 which became The Breed books. Her first one, The Midnight Breed, Book 1: Kiss of Midnight, made it on the USA Today list, marking her first appearance on that list. The second in the series, The Midnight Breed, Book 2: Kiss of Crimson, also debuted on the list at 62. Hers is a story of rebirth or, as my mother would say, making lemonade out of the lemons.

It took me two years to write my first manuscript, a medieval romance called Lord of Vengeance. At that time, in late 1997, it seemed like it was harder to acquire an agent as an unpublished writer than it was to get the attention of an editor (maybe it still is?). After talking with a couple of agents at conferences, I decided to venture out on my own and send my manuscript over-the-transom (aka, via the slush pile) to my short list of dream publishers.

Within a few weeks, I had some promising requests for more material, but peppered among them were the rejections. A couple were form letters or polite “not right for us” responses, but one editor wrote such a nice, encouraging rejection letter I framed it and kept it on my wall for years, even after I sold. Another editor actually called me to reject the manuscript–just my luck that “the call” really wasn’t “the call” at all! The good news was, both of these editors extended offers to work directly with me on something else, should my first manuscript not find a publisher.

On January 26, 1998, I picked my husband up from work and told him that I didn’t think Lord of Vengeance was going to sell. It had been four months since I’d begun submitting it (I didn’t realize then how little time that was by NYC publishing standards), and I thought I should probably consider shelving the book and giving one of the two interested editors a call about starting something new. Literally a few minutes after we walked in the door, around 4:30pm, the phone rang. It was Shauna Summers from Ballantine Books. She told me she loved my manuscript and wanted to make an offer to buy it!

Flash forward seven years, to late August 2005. I’d received a lot of nice reviews, collected a few awards, but medieval romance sales were down–well, mine were, at any rate. I had just wrapped my third contract with Ballantine and was waiting on word about my option book, the last title in a series I was writing for them. My husband and I had just closed on our condo the week before–our first home together after about twenty years of renting–when I got word that Ballantine wouldn’t be offering for another historical from me. So, there I was with a brand new mortgage and it appeared that my career, as of that moment, was over.

The suggestion from Ballantine was that I come back to them with something contemporary/paranormal. What no one knew, including my agent, was that I’d been dying to try my hand at that very thing for a long time. In fact, I had intended to pitch an idea for a dark paranormal after I finished the last book in my medieval series. I got to work and put together a proposal for my agent for the book that would become Kiss of Midnight. She was very enthusiastic about the material and in mid-September, she sent it out to several houses.

We got a nibble on it the next morning. Then another one the next day, with more editors interested as well. My agent told everyone to come back in a week with their best offers. Let me tell you, that was the Longest Week In History. In the end, I chose to sign with Bantam Dell. And here’s a nice bit of karma: During my tenure at Ballantine, my acquiring editor, Shauna Summers, took a career hiatus to pursue an advanced degree. She returned to publishing a few years later, going to work for Bantam Dell. I couldn’t have been more thrilled to hear that she wanted to work with me again on this new project under a new pen name, and accepting her offer for my “first book” the second time around only made the moment that much sweeter!