My First Sale by Kylie Brant

Welcome to the My First Sale series. Each Monday, Dear Author posts the first sale letter of bestselling authors, debut authors, and authors in between. Kylie Brant has a trilogy of Romantic Suspense books out from Berkley. The first release, Waking Nightmare, was out in September. Waking Evil, the next in the series, will be on the shelves next Tuesday. 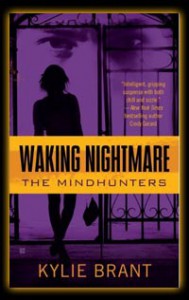 Usually it takes very strong margaritas to get me to tell my first sale story. After all these years it still makes me wince at my ignorance. But I started writing before the Internet made it so easy to network with other writers. I didn’t belong to any writing groups or know anyone else who was writing. I just decided one summer I was going to write a book.

After a few months, I deemed it "ready’ and opened up the cover of my favorite books (Silhouette Intimate Moments) to see where to send it. I got the phone number for the company in New York and called to tell the receptionist I had a book I wanted to send in and asked how to go about it J

She huffily informed me that they didn’t accept unsolicited manuscripts. I had no idea what that meant, but could tell from her tone that it was a bad thing. She finally gave a long-suffering sigh and told me about tip sheets and query letters. I queried and got an invite to submit and sent it in.

I figured I’d hear in about six weeks. Four months later I got a two-page rejection letter from a senior editor detailing the work’s strengths and weaknesses and inviting me to revise and resubmit. I did, but I’d wised up a little. This time when I sent that first manuscript in, I immediately started another. That was lucky because this time it took six months to get yet another two page rejection letter. Manuscript two had been submitted, so I revised the first yet again and sent it in, too.

When Silhouette called I was actually home from bed with laryngitis. Leslie Wainger’s (then senior editor of Intimate Moments) assistant called. She said she was just tracking down my contact information because-‘AHEM-‘I had neglected to include it with my manuscript. She went on to say that she was quite excited because she’d found me in the slush pile. I had no idea what that was, but thought she said flush pile, and that didn’t sound good! She told me Leslie was reading the manuscript as we spoke and that she’d be calling me later.

After we hung up, I started to wonder if I’d dreamed it. Maybe it had just been a Vicks Vapor Rub induced hallucination! But Leslie did call a couple of hours later and make an offer on manuscript two. She asked if I had any other works and I told her I had another in their offices. A couple months later she bought manuscript one, as well. So while I can claim to have sold the first book I wrote, it did go through some extensive surgeries first J