My First Sale by Kate Quinn Welcome to the My First Sale series. Each Monday, Dear Author posts the first sale letter of bestselling authors, debut authors, and authors in between. Kate Quinn’s first book, Mistress of Rome, is in stores now.

2008 had not started well. My fiancé and I spent New Year's Day driving through a blizzard on our way back from a mountain vacation, and toppled into bed after midnight after digging his car out of six snowdrifts. I slept through my alarm, was wakened by my phone ringing, assumed it was my irate boss wondering why I wasn't at my desk, and went back to sleep. But it wasn't my boss; it was a literary agent in New York. Who wanted to represent both me and the massive unwieldy novel about ancient Rome that I had been shopping around for the past seven years.

Not that I was searching for an agent that entire time. I'd finished my novel, a historical fiction epic set during the reign of a deeply crazy Emperor, and I'd immediately sent out a round of query letters that came back to me just as fast. The process of finding an agent, an editor, a publisher, in fact any sentient being to take an interest in your work – well, it can be extremely discouraging. And I'd always rather be working on a new book than camped out by the mailbox waiting for rejection letters, so in the seven years following my Roman epic's completion I only intermittently worked on trying to get it published. In 2007 I abandoned the Roman epic and tried my luck on a different book, sending out rounds of queries and getting the usual batch of "No thanks," "Not accepting new clients," "Not for us," and just one "I like your style, but this isn't quite doing it for me." I latched onto the last response and volunteered to send my Roman epic for perusal instead. Off it went, looking distinctly tatty by this point, and I largely forgot about it. Until I got that phone call on the second day of the new year, bone tired from snow-shoveling and very late for work.

Well, 2008 got a whole lot better right away. Even my boss, who was extremely irate by the time I showed up in mid-afternoon, couldn't dim my radiant mood. I had an agent. I practiced nonchalant phrases: "Sorry, my agent is on the other line." "I have lunch today with my agent." We hit it off over the phone at once, though I managed to stun her with the realization that I was only twenty-six. "You're a baby!" she said in astonishment, and I decided not to tell her (yet) that I'd written my novel at the age of nineteen. One shock at a time. 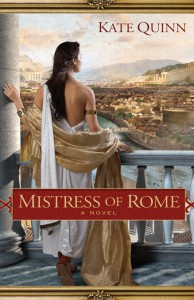 Of course, an agent is only the beginning. My Roman epic had to be made publishable first, and my agent had a list of improvements. I gulped, reached for a scalpel, and tore into my baby without mercy. Four months later, my fat schlubby pages had been transformed into a taut sleek novel, much like the winning contestant on The Biggest Loser. My agent began shopping it around New York, and I began praying. A few months later, I was tying my sneakers to go on a hike when I got The Call.

I don't remember much of that phone call – something about Berkley Books and a 2010 release. I remember my fiancé hovering at my side, scribbling notes on a pad as I talked with my agent: Well?! Did you get an offer?! Put the phone on speaker!!! I remember burying my face in a pillow afterward and trembling. I remember calling my mother and telling her to sit down before I said another word. And I don't remember much of the rest of that evening, because great quantities of champagne were involved.

2008 turned out to be a pretty good year after all.