My First Sale by Jill Monroe, The Fall Of The Soviet Union Made Me Write Romance 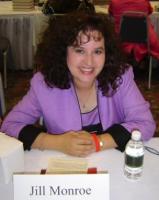 Jill Monroe made several abortive attempts to write but didn’t get serious until she joined the RWA and began studying the craft with the Oklahoma Romance Writers chapter. She wrote eight books during that time and claims that two are unpublishable. She was a finalist in the Golden Heart and came to the attention of her current publisher through a contest at Harlequin in late 2000. Since then, she’s published six books (2 being from the original 8) and I am sure we’ll see more of her in the future.

Her current release has a unique twist. It tells the story of a brother and sister and their unusual paths to romance. I particularly liked the older woman (the sister)/younger man romance the best and thought that this uncommon coupling makes Primal Instinct stand out.

I’ve read most of the first sale stories here at Dear Author. I really wish I had something like Kresley Cole’s Rule of 25. But really, I’ve been solidly working on a career based on one piece of bad advice after another.

I began reading romance back when I was 12 in much the same way others did – I snuck it from my grandma’s stash. Okay, that’s not all together true. She did give me my first romance, a Harlequin Presents. I loved every word of it. To this Oklahoma girl spending the summer on my grandparents’ acreage harvesting potatoes and canning pickles (which is terrible by the way – I’ve never been able to eat them since) those romance novels took me places all around the world. It wasn’t too long before I was sneaking longer, more explicit romances. (This was back in the day when I was shocked SHOCKED that the hero got the heroine’s top off in an HQPresents.) To say I learned about sex from romance novels is probably true.

Fast forward to adulthood – Sometimes you have a career all mapped out for you. I could see mine clearly. I was going to be a foreign correspondent covering the Soviet Union. Language – check. Understandings of The Politburo, the Warsaw Pact, and the Soviet Constitution – check. Suddenly having everything that’s current become history with the fall of the Soviet Union…new career plan. Of course it took awhile. More school, then the work force, but the idea to write the kind of stories I loved to read took root in college. When I meet up with old college friends, they’ll often ask me if I ever did get that romance written (since they’re not seeing the name Jill Schwoerke on a book).

So, first piece of bad advice. Write what you’re interested in. Sure, this works great for writers who are interested in Navy Seals or Vampires, but no one wanted to read my craptastic first stab at romance called A Political Affair. Imagine my surprise when I realized politics just isn’t very sexy to a lot – many people actually find it kind of sleazy.

Second piece of bad advice – Write what you know. Once again, not a lot of interest in that sweeping Russian historical called A Russian Affair. Many people actually find Russian history kind of depressing.

It was clear, I had to change everything about myself and my interests.

So, with a blank word doc, I decided to go old school romance. I opted to take on the secretary/boss book. I was never a secretary, I’ve never been hypnotized, I was never in love with my boss, it had nothing to do with me personally. It met all the criteria, and eventually became my first published novel – Never Naughty Enough.

In my later books, the heroines all have careers that I briefly considered while fumbling around trying to figure out what I planned to do with my life. Like anthropologist in my current novel, Primal Instincts, or private detective in Tall, Dark and Filthy Rich. Although criminal (Hitting The Mark) didn’t really factor into the equation. Truly.

I wish I’d said something really funny and kind of cool like Gennita Low did when she sold her first book, “Everyone gets new chalk boxes!” But sadly I’m never home when something exciting happens. A pattern I began when I finaled in the Golden Heart – missed the call. When Brenda Chin called to tell me she was buying NNE – not home. With my second book sale and my agent calling me – missed. When I called her back – not in the office. My life is happening, and I’m out running errands, and not even exciting one – things like buying milk.

But I was home to get the package that brought me my first book published in Russian.