My First Sale by Jill Mansell First Sale Feature, Author of Rumor Has It Welcome to the My First Sale series. Each Monday, Dear Author posts the first sale letter of bestselling authors, debut authors, and authors in between.   UK bestselling author Jill Mansell has written nearly twenty romances, and sold over 4 million books.   A master of romantic comedy, her smart, sassy style has an irresistible appeal for women of all ages.   A full–time writer, Ms. Mansell worked for many years the Burden Neurological Hospital, Bristol. She lives with her partner and their children in Bristol, England. For more information, please visit  http://www.jillmansell.co.uk/ or follow Jill on Twitter:  http://twitter.com/JillMansell.

When I was struggling to become a published author I dreamed of the day the acceptance letter would fall through my letter box. I practically stalked our postman – poor man, I'm sure he used to dread coming to our house. How could he understand that I wanted an acceptance letter, not a returned, rejected manuscript?

In fact my first returned manuscript wasn't such a disappointment, as I didn't seriously expect anyone to publish me – it was a wonderful dream that I never imagined would become a reality. And the publisher – Harlequin Mills and Boon – sent me a wonderfully long letter with tons of helpful criticism. I tried so hard to do as they said when I started writing again. Unfortunately, they were telling me to cut down on the humour and ramp up the romantic element. The latter I could do, but the former defeated me. I discovered I couldn't write without being funny,  and that wasn't what they wanted. I kept on trying for a while, though. I still have six or seven of those manuscripts at home – so I'm very familiar with the thud of the unwanted returned novel on the mat!

But I changed direction eventually and decided to write the kind of novel I would enjoy reading myself. I sent it out to the first agent I'd chosen, who said it was unpublishable because too much happened in it. It was then rejected by a second agent who complained that not enough happened in it. So I sent it out to the third and final agent, because I simply couldn't afford all the postage. Luckily she loved it and phoned me up to tell me so. She wanted to meet me, and I travelled up to London on the hottest day of the year, terrified that she'd change her mind and turn me down when she saw my fake tan melting all over my legs…

Anyway, luckily she didn't. She submitted the book to two publishers. A week later I was at work when a call came from my lodger(landlord), to tell me (in her ditsy vague way) that my agent had called the house and said something   – my lodger wasn't sure exactly what – about selling some book or other. 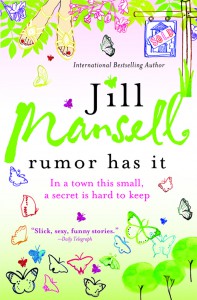 Since I wasn't allowed to make long distance calls from work, I called my agent when I got home that evening and she confirmed that an excellent publishing company had made an offer for a two book deal. I was hyperventilating with excitement and all alone in the house – my ditsy lodger had gone out. I rushed to the shops, bought two bottles of champagne I couldn't afford, and went round to a friend's house. More friends turned up. We went out and celebrated all night. My memories are hazy (!) but I know it was the happiest day of my life.(I'm allowed to say that as I hadn't yet had my children at that stage…)

The irony, of course, is that after all those years of waiting for the postman to deliver that momentous acceptance letter, all the good news came by phone. For any pre-published writers out there, stick with it and don't give up. When the acceptance comes, it doesn't matter how it reaches you – any way is fine. Good luck!

Rumor Has It is in stores May 2010.   Three lucky commenters will be entered to win a copy of the book.