My First Sale by Jessica Andersen 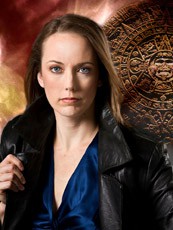 Welcome to the My First Sale series. Each Friday, Dear Author posts the first sale letter of bestselling authors, debut authors, and authors in between. Jessica Andersen is medical doctor specializing in genetics who happens to write romantic suspense for Harlequin and a paranormal romance series for Signet (imprint of Penguin) based on the Mayan calendar. Her book, Dawn Keepers (excerpt) is in stores right now.

As I tried to figure out where to start this post, I realized I sort of have two first sale stories- my first sale to Intrigue in ’02, and the sale of Nightkeepers to NAL in early ’07. More, I realized that both stories have the same fortune cookie message at the end. So here goes. . .

My first Intrigue, Dr. Bodyguard, arose from a spotlight at RWA national (in Dallas, maybe?), where the senior Intrigue editor talked about wanting cutting-edge stories. She said, "Give me high-tech, give me DNA, give me something I can sink my teeth into!" I sat up and thought, I can do DNA. So I went home and started writing a story set in a gene-mapping lab very like the one where I did my doctoral work (remember, write what you know!). I was so excited about the story that I fired off a query letter when the book was about a third of the way done. And got a rejection letter when it was two-thirds done. Le sigh.

But I kept going and finished the book, sure that this was the story that was finally going to sell. I was finaling in good contests and knew that I was close, but just needed that right timing/right editor/good karma moment. So even though Intrigue had already rejected the story, I went to a local conference and pitched it to the attending editor from Harlequin. She got a gleam in her eye as I pitched, and when I was done she told me to send the full, immediately. I later learned that the decision had just been made to open Intrigue from four to six books per month, and they had slots to fill (see above re: right timing). Within two weeks of that conference, that editor called to buy the book. (And for those of you who think Harlequin doesn’t keep track of whether they’ve rejected stuff before- trust me, they do! They knew they’d already rejected the project on query.)

Now- let’s fast-forward four years. Those were good years in that I was able to write three to four Intrigues a year, honing my craft. But they were frustrating, too, because I wanted to let rip with the complex plots and overarching storylines that I love. My closest writing friend had captured that elusive lightning in a bottle- a fabulous new series at exactly the right time- and hit the big time. I didn’t (don’t) begrudge her that for an instant, but I wanted it to be my turn, too! I wrote single title proposals that got shopped around by first one and then another agent, and were rejected as near-misses. It wasn’t that I didn’t have the writing chops (imho) so much that I hadn’t yet found the story. I was writing medical suspense proposals because that was my platform, but I wasn’t really jonesing to write a big medical suspense- I was forcing it, and it showed.

Then, while doing research for a proposal involving snake cults, I stumbled on an Aztec snake ritual and thought, I like Mesoamerica. (I spent some time in the Yucatan as a child, and crawled around inside a lot of Maya ruins. That’s always stuck with me.) So I followed that info trail, and stumbled over a reference to the end of the Maya Long Count Calendar on December 21, 2012, and how several different lines of evidence suggest that something big and nasty (and potentially apocalyptic) is going to happen on that day. And I thought, Hello. . .? The more I looked into the 2012 doomsday, the more I thought, I want to write about this. Add in the blood sacrifice and the power of lovemaking in the ancient rituals, and I started channeling a sexy, action-packed paranormal series about the men and woman destined to save mankind in the last four years before the 2012 end-date. And I was going to be the one to write it!

I spent the next year researching, writing, rewriting and lining up quotes from bestselling authors (thanks, guys!) for the proposal. Totally jazzed about the stories, I sent it to my then-agents. The response was. . . lukewarm at best. They encouraged me to try another direction. I did. Away from them.

Thus, armed with a proposal that I believed in with every fiber of my being, for a series I was dying to write, I sent out queries to my top five agent picks. Within two weeks, I had offers from three of them. Within a few weeks after that, my fabulous new agent asked me who my dream editor/house would be, and she gave them a forty-eight hour exclusive. Forty-seven hours later, we had an offer. I cried like a baby (though I’ll deny it if anyone asks). That three-book contract became Nightkeepers (6/08), Dawnkeepers (1/09) and Skykeepers (8/09), with another four to six books planned before 12/21/2012 (fingers crossed).

So. . . the fortune cookie take-home? Don’t give up on the story you really, really want to tell. You may have to try some alternatives, or wait for your writing to catch up with your concept. . . or heck, for the market to change in a direction that will accept the book you’re dying to write. But don’t give up on it. You may find your chance sooner than you think.