MY First Sale by Gennita Low 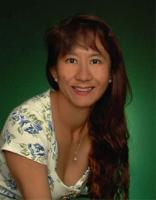 Gennita Low’s road to publishing is a bit different than the average romance writer. Her nine to five job is spent hammering down shingles under the hot Florida sun. This gives her time to plot and plan for her Virtually series and future books. She was a three-time finalist in the RWA Golden Heart contest before she became published. Studies German and Russian and served as a translator in her twenties. Her latest release, Virtually His, is in stores now.

Once you are done enjoying her books, you might call her to fix your roof leaks.

I bet no one ever received her CALL while she was wielding a nailgun on a rooftop. I’m a roofer, you see, and was out at a job site that March day, 2002.

I live in Florida, so roofing is a hot, sticky affair, among stinky, dirty men. I was wearing my very dependable pink bikini top (the kind that made sure your apples didn’t pop out in the middle of swinging a hammer) and was actually having a good time because I was kicking some male asses with my speed that day.

The sky was a calm blue. I remember taking a swig of ice tea from my cooler and thinking what a perfectly sweet day it was and if only I could get these lazy butts to move a bit faster, I could actually make some money off this job (I happen to be the boss too, you see).

My chalk box slid off the roof. I didn’t feel like retrieving it from the ground, so I looked around and asked each of my men for their chalk boxes. None of them had one in his toolbelt or on the roof. I stared at them disbelievingly and asked, “Am I the only one on this roof who can afford a chalk box?”

Half an hour later, I discovered that my snips were missing. I couldn’t find them, so I asked for my guys for theirs. It turned out that they didn’t have any snips on them too. Irritated, I yelled out, “So I’m the only person who can afford snips too?”

Just then the cell phone rang. I was standing on the peak of the roof, hands on my hips, indignantly demanding as bosses were wont to be when their men didn’t bring their tools to a job. Trouble brewing in paradise. I answered the phone.

It was my agent, who very rarely called me in the two years of our relationship. Her first words were: “Jenn, are you sitting down?”

“Not really,” I replied.

“You need to be. Because Avon called and made an offer for Kissing Games (later retitled Into Danger).”

I sat down on the peak of the roof. Coughed. “Say that again,” I said.

I didn’t hear a word of what my agent said. I was just sitting there, with the oddest sensation that I was flying at great speed, with the wind in my face, my mouth open, and my tongue hanging out, the way my doggies do when we go for a ride.

“I asked for a two book contract, Jenn, and they agreed.”

I HEARD THAT! I jumped up from my position and started to do this sideways hop along the ridge and whooping unbecomingly. You know, on thinking back, the other roofers had stopped working by then and were just standing there staring at my new dance.

“Hang on, Liz,” I said, then put the clunky cell phone (it was a 2002 Eriksson the size of a pencil box) against my chest and yelled: “I sold my book! Everyone gets new chalk boxes!”

That caused a stir among my guys. I was sure it was the news about the book and not my generosity.

My agent was laughing when I got back on the phone. She told me the money Avon was giving me.

I made a bionic leap on top of several bundles of shingles, startling my partner, and waving my arms around, I yelled again, “Correction! Everyone gets new chalk boxes AND snips! Woohoo!”

I don’t think my men had ever seen their boss dance in her bikini before.

I didn’t care. Fortunately, there were no videos or cameras on cell phones in those days. Or I would have to pay a lot more than chalk boxes and snips.