My First Sale by Gail Carriger 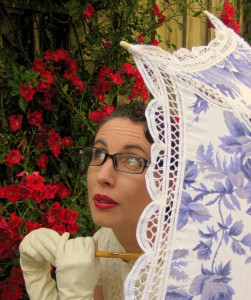 Welcome to the My First Sale series. Each Monday, Dear Author posts the first sale letter of bestselling authors, debut authors, and authors in between. Gail Carriger is the author of the Parasol Protectorate series.  You can friend or follow Gail on Twitter, Facebook, Livejournal, or Blogspot. Or join The Parasol Protectorate Facebook Group and take over the world one sip of tea at a time. You can also play the  Alexia paper-doll dress up game (beware, though, I’ve wasted many many precious minutes on this game. Blameless

, the latest book in the series, is out now.

So I wrote  Soulless on a dare. No really.

I was winching on, as you do, that no one wanted to buy my overwritten overbuilt YA fantasy series (ten years or so of trying).

My then partner, AKA the Louder Half, looked at me and rumbled, “So why don’t you just write something that will sell?”

To which I replied, “I’ll play your silly game.”

At which he explained, “Your problem is that you want to be an artist. What you need to be is an artisan.”

He’s a computer geek, what can I say?

But there was some merit to this idea. So I thought to myself, what’s missing in the book world right now? What do I want to read that I can’t find? What niche can I carve for myself in this troublesome market? I know they say never to write “to the market”, but I was so very tired of playing by all the rules.

So I nosed about. There were plenty of urban fantasy books out there but they were mostly contemporary. Steampunk was just getting popular but it was mostly dark. I enjoy reading about the past but I also dearly love a good laugh. So I dared myself to try to write a steampunk urban fantasy comedy of manners. Why not? I had nothing else to loose.

It took me 6 months to write and then I sent  Soulless out into the slush piles and prepared to collect rejection letters. I did collect them, but mostly from agents.

Much to my shock, just under two months later, I got that fateful 212 phone call that every writer dreams of (212 is the area code for New York City). I was drinking a most excellent latte and correcting term papers at my favorite local cafe. There might have been some rather indelicate sputtering and a certain amount of foam loss as a result of the fact that on the other end of the line was a senior editor from a major publishing house.

I then wandered, in simulated dignity and forgetting all about both exams and latte, through the cafe and out the back where I started gyrating around the parking lot in an excess of excitement.

With possible contract to hand, I queried my first choice agent and she said yes. Contract negotiations commenced. Only then did I find out they wanted a series.