My First Sale by Douglas Carlton Abrams, A Dream Come True, After So Many Sleepless Nights 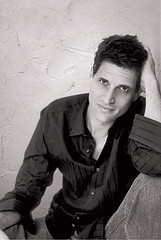 Welcome to the My First Sale series. Each Friday, Dear Author posts the first sale letter of bestselling authors, debut authors, and authors in between. Douglas Carlton Abrams writes historical fiction for Atria. His debut book, The Lost Diary of Don Juan, is in stores now.

I have been writing fiction and actively pursuing the dream of being a novelist since I was eleven, so from that perspective, my first sale was a long time coming.

From a publishing viewpoint, I expected that it would take a while. I actually went to work in publishing because I loved books, and I wanted to understand what it was like from the inside. Perhaps you could say I was a spy for authors in the world of publishing. But as I worked, I saw the incredible obstacles that editors face publishing quiet books in the noisy world of today’s media. I experienced the excruciating pain of writing rejection letters and putting books out of print.

Later, as a writer, I received rejection letters for some of my non-fiction books (I wrote kinder ones as an editor). I even had one of my non-fiction books dropped by a publisher when the editor left. Inevitably, these decisions are as much about the editor or the publisher as the merits of the book, if not more so. Much as we may wish, there is no objective truth in the land of aesthetics.

In short, I was not naive when I entered the submission fray. I knew I would have only one chance to submit my fiction to my agent, and that she would have only one chance to submit it to publishers. So I held on to it, revising and polishing obsessively over twenty-three drafts before I shared it with my agent. I knew there was nothing harder than writing fiction, and I needed to convince her (and myself) that I could write a story that breathed and sweated and sang with life. I also knew enough to hire a number of editors and professional advisors to tell me when it didn’t.

Finally, when it was ready to go out to publishers, I was the one who was sweating. It is hard to convey the night-waking, body-trembling experience of putting a creation of one’s soul out into the world for acceptance and rejection. But the day finally came when I was able to pry it out of my Muse’s clawed and nervous hands.

As my agent prepared to send out the manuscript, she heard from a Brazilian scout who had gotten ahold of the manuscript early and already had an offer from a Brazilian publisher. Wow. I was amazed. I had lived in Brazil, loved Brazil and its people, knew no one in the publishing world there, but now loved Brazil even more for their early embrace of my Muse. I guess it is fitting, since The Lost Diary of Don Juan is about love, romance, and passion, and my caged North American heart had been broken open in Brazil (that’s another story!).

We went into the American auction with a sense of excitement and Brazilian ginga (sway). I was fortunate that the best offer came from a brilliant editor named Emily Bestler at Atria Books, a very skillful and commercially savvy arm of Simon & Schuster. To my amazement, Emily wanted a two-book deal, The Lost Diary of Don Juan and an untitled next book. Outer-body-experiences are hard to describe, since all we really know are our five senses. Suffice it to say that there was a tingling sensation and a sense of the laws of gravity loosening their grip on my body, much like being an astronaut floating above the surface of my house.

And then remarkably, the book started to sell in other countries around the world, from Brazil to Bulgaria and Taiwan to Turkey. As the Dutch publisher later confided in me during a tour of Seville with journalists from around the world (another unimaginable dream come true), “I had to have it and your agent knew it.”

What would Don Juan do? We had to celebrate. So we got period costumes (the novel takes place in Golden Age Spain, about the time of Shakespeare-‘by the way, men were not meant to wear tights), hired a sword-fighting instructor and a Spanish dance teacher (I had taken lessons in both while I was writing the novel), made a big vat of sangria, and reenacted scenes from the novel. Unimaginable fun.

Perhaps the most truly unimaginable experience, however, was going to the Frankfurt Book Fair to meet what ultimately became thirty publishers from around the world. I was asked to address the gathered crowd. I held my glass of rioja and could hardly speak. I had been a dyslexic boy, who took a long time to read, and to this day I still break out in a sweat every time I enter a bookstore. My English teacher had told me I would never be a writer (why did teachers used to say stuff like that?), but I persevered and pursued the dream of being a novelist.

And then there I was, looking out at a room full of publishers from around the world, all expressing their gratitude for the book that I had given them and their readers. I could not believe that I was awake. But it was not a dream.