My First Sale by Darynda Jones

Welcome to the My First Sale series. Each Monday, Dear Author posts the first sale letter of bestselling authors, debut authors, and authors in between. Darynda Jones sold her debut book, a Golden Heart winning entry, at auction to St. Martin’s Press.   First Grave on the Right is on shelves starting tomorrow.

An interesting thing happened on the road to publication. Life.

While I'd been conjuring tales since before I could actually write, I didn't really know I wanted to be a writer-for-reals until I was in middle school. But by that time, I knew three things about myself that made a writing career seem impossible: I was a horrid speller; I had the attention span of a gnat; I was nowhere near smart enough to pull off a novel, much less (gasp) two!

But with the encouragement of my best friend who also loved to write, I started my first manuscript in high school. We'd sit in a corner booth at the local Tastee Freeze for hours at a time, each writing our respective stories. Mine was post-apocalyptic about a group of teens who bore a remarkable resemblance to the members of Van Halen and were trying to escape the tunnels of a huge government fallout facility decades after World War III had destroyed the surface of the earth. It was a science fiction version of the cult classic The Warriors and destined to be a bestseller.

But after graduation, the real world came crashing through. Marriage, kids, college, career. These things took over my life. Still, the desire to write needled it's way back to the surface. Unable to squelch it any longer, in 2002 I started writing seriously again with one goal in mind: A publishing contract. Unfortunately, I sucked. Thank goodness practice makes perfect and three complete manuscripts and seven years later, I won an RWA Golden Heart, landed an amazing agent and sold to St. Martin's Press in a three-book deal.

Well, maybe not. For me, that Golden Heart final changed everything. Admittedly, I'd been entering the Golden Heart for several years, and while I received some pretty good scores (and some not-so-good ones), every year I really thought I had a chance to final. Until 2009. I signed up to enter First Grave on the Right for one reason, and one reason only. I wanted to force myself to finish it. I knew beyond a shadow of a doubt it would not final. No way. No how. And then I was mad that I'd wasted the entry fee. That money could have been used for something worthwhile, like a workshop! But I grudgingly sent it in and forgot about it completely. No, really. I dismissed it from my mind entirely.

So March 25th rolls around and while I was at work my husband texted me. There was a message on the machine saying I'd finaled in a contest. I texted him back, "What? I haven't entered any contests." "IDK, something about a golden something or other." I froze. Actually, I had to freeze. I was in the middle of state testing with a client and I couldn't make a peep, not a sound, nothing that would distract the student from the test. So, I texted, "Did it say the Golden Heart?" "Yes." I freaked out. On the inside. And texted OMG to my husband over and over. Fortunately, my client was just finishing up the test. She closed the test booklet and I burst into tears, jumped up and hugged her. It was ridiculous. She got upset that I was crying.

Sadly, the manuscript needed tons of work, so after the final, I polished it for about two months before querying. Then I spent about a week doing research and writing my query. When I was satisfied, I queried about twenty agents over a three-day period. Within a week I had an offer of representation. I wrote the agents who'd asked for either a partial or a full, told them about the offer and gave them a few days to get back to me. Before the week was out, I had eight offers of representation from some of the most amazing agents in the business.

I know that sounds wonderful, but it was actually one of the most stressful weeks of my life. I never expected that kind of response and was very torn. I spoke to each of them, many more than once. I emailed them, asked questions, researched some more. After a week that I never want to repeat as long as I live, I accepted an offer of representation from Alexandra Machinist at the Linda Chester Literary Agency. And let me just say, having her in my corner is like having Mike Tyson as a personal bodyguard. I am beyond grateful. 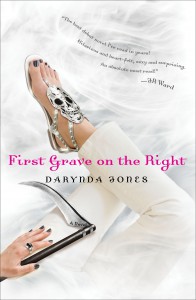 The GH win garnered a lot of interest, so Alexandra began shopping First Grave that August. About a week later, I was in the middle of district meetings and noticed Alexandra had called. We played phone tag for a bit, and when we finally connected, she asked if I was sitting down. Jennifer Enderlin from St. Martin's Press had made an offer for a three-book deal. Yes, THE Jennifer Enderlin. The offer was so much more than either of us had expected the waterworks started all over again.

We had a couple more offers over the next 24 hours and then right before Alexandra sent it to the floor for auction, Jennifer swept in with a pre-empt we simply couldn't refuse.

Whew! And now, book one in the Charley Davidson series, First Grave on the Right, is coming out in hardcover. February 1st, to be exact.

Thank you so much, Jane, for having me! And I would love to give one commenter his or her choice of either the hardback or the audiobook read by the fabulous Lorelei King.

→ Jane
Previous article: Dear Jane: What eBook Reading Apps Should I Use on the Laptop?
Next Post: REVIEW: Animal Magnetism by Jill Shalvis