My First Sale by Charlotte Hughes My First Sale series. Each Friday, Dear Author posts the first sale letter of bestselling authors, debut authors, and authors in between.   Award winning author Charlotte Hughes began her writing career publishing newspaper and magazine articles before becoming a New York Times best selling author. Charlotte makes her home in Beaufort, S. C. Best known for her FULL series with Janet Evanovich, she has written over 40 books, ranging for the 3 mysteries she wrote for Avon to Mira’s HOT SHOT. Her newest release, NUTCASE centers on Atlanta psychologist Kate Holly and the humorous antics of her friends, family and patients. In the process she learns that the life of a psychologist is enough to drive anyone nuts. Readers are invited to visit Charlotte online at www.readcharlottehughes.com, where she also blogs regularly. As part of the introduction of her newest work, NUTCASE, Charlotte is doing a virtual blog tour VIRTUALLY NUTS in February and March.

I ran a licensed daycare at the time of my first sale. It was a way for me to earn income and stay home with my two little boys, both under the age of three. I had a total of six children under the roof of my house from 7 AM to 7 PM. I highly don’t recommend that career path. If one kid gets a runny nose, they all get runny noses. Same with diarrhea.

I’d simultaneously submitted a manuscript to several agents, but weeks had passed and I hadn’t had time to worry about it because, well, there were SIX CHILDREN in my house! And one of them had a habit of biting people.

It was lunch time, and I busier than a one-armed paper hanger, trying to get food on the table and keep an eye on The Biter. The noise level in my kitchen was multiple decibels higher than what somebody from OSHA would have deemed safe, so when I answered the phone I could barely hear the person on the other end. Somebody from such-and-such was interested in representing my book.

I figured I hadn’t heard right. I was mistaken. Or maybe it was a scam. Only a week before, some publishing company had called to sell magazines. My husband answered the phone and all he heard were the words "publishing" and thought I’d just made my first sale. He yelled out to me, "Hey, there’s a publishing company on the telephone. I think they want to buy your book." I broke three fingernails and stubbed my big toe trying to get to the phone. In the end, I order four magazines from them.

But the nice lady on the other end of the line was from a literary agency, and she liked my style. She felt certain she could sell my book, but she had a few revisions. Well, hell, I would have rewritten the whole book in my own blood at that point. I grabbed a sheet of paper so I could write down her suggestions. My nine-month-old was smearing peanut butter of his face, but at least everyone was safe from the Biter. He was gnawing on the back of a chair. 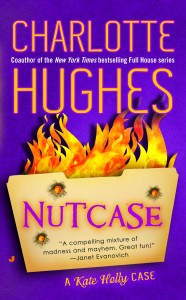 I used nap times to write so as soon as I tucked everyone in I started on my revisions. A couple of weeks later, I mailed it to the agent. Days turned into weeks, and I heard nothing.

On the day I received "the call" I was sprawled on my sofa, suffering from a bad case of PMS. I was exhausted, having just put six cantankerous kids down for their naps. I was considering a career change. Suddenly it didn’t seem as important to be home with my children during their "tender years." In fact, I thought it would be fun find a job where I traveled a lot.

The agent asked me if I had any nice photos of myself. Well, sure, I thought. There was a picture of me smiling proudly beside my son who’d finally taken a dump in his new potty chair, me kneeling at the bathtub drenched from head to toe, trying to get both boys bathed, me holding a birthday cake and surrounded by six children, including the Biter.

But, no, the agent wanted something professional looking. Something that would look nice on the inside back cover of my new book. The book that had just sold!

I’m not real clear what happened next, although I’m pretty sure the heavens parted, and trumpets sounded. I think the angels sang. I just remember walking around the house in stunned disbelief for the rest of the day. I have a vague recollection of being startled by the sound of a yelping kid. In the brief time I’d allowed myself to wallow in sheer happiness, the Biter had struck.