My First Sale by Catherine Delors 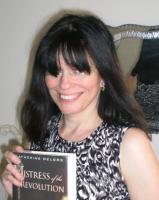 Catherine Delors has a unique story that the readers haven’t heard before. Delors’ first language is French but her first published novel is in English. How hard must that be? Delors graduated from the University of Paris-Sorbonne School of Law, became a member of the Bar of Paris at 21, got married, moved to the US, passed the California Bar (which is super hard) and set up a solo practice after the birth of her son.

I’m pretty much in awe of that resume but even beyond being a bi-lingual lawyer, wife and mother, Delors wrote and sold her first novel, a historical “epic journey into the heart of the Revolution, from the glittering halls of Versailles to the brutal slice of the Guillotine.”

While I was working on Mistress of the Revolution, things were not going well in my personal life. The joy of writing kept me going at a time of intense unhappiness.

And then one day my novel was completed. I had a moment of panic. A sort of postpartum blues, and I had read that I needed an agent to sell my book. I did not know a thing about literary agents, apart from the fact that most worked in faraway . They might as well have lived on Mars. How was I to go about it?

I discovered a website, AgentQuery.com, that offered – for free – a database of reputable agents and their areas of specialization. I made a list of those who handled historical fiction and sent query after query. In response I got reams of rejection letters. One agent even wrote me that he thought that the book was "unpublishable." That was cruel, needlessly so. But a few agents asked for partial or full manuscripts. Some, though they declined to represent me, took the time to write something nice about my writing or the concept of my novel. I treasured those kind words, for they helped me hold on to my sanity while the rejections letters kept pouring in.

Then one Saturday, I received a message on my voicemail from an agent. She said she was about midway into my manuscript, but she already wanted to let me know that she loved it. I kept playing the message over and over again because I had trouble believing it. A couple of days later, I was able to reach that agent. I half expected her to say that she had finished the manuscript and finally did not like it at all. But no, she was still raving about it. I could not believe my ears. I hesitated before asking: "Do you mean you are making me an offer of representation?" and she said "Well, of course I am!"

I took a deep breath. Things had become complicated, in a very positive way. You see, in the meantime, I had received several emails from another agent, Stephanie Cabot, of The Gernert Company, who was also reading the manuscript.

I will never forget the manner in which Stephanie and I connected. She called me on my cell phone, while I was taking a week’s vacation in the mountains of , in , with my Mom and son. It just happens to be the setting for the beginning of Mistress of the Revolution. I had not visited there in twelve years.

So I was standing on the banks of the , on that little pebble beach where my heroine, Gabrielle, meets her first love. There begins the chain of events that will engulf her entire life. I was gripped by the emotion of half-forgotten and suddenly awakened childhood memories, while I could almost hear the footsteps of my novel’s characters on the little pathway behind me. The place is remote, surrounded by high cliffs, and I had no idea that any cell phone calls could reach me there.

Yet one did that day. Stephanie’s voice, thousands of miles away, sounded perfectly clear. And now she too was offering to represent me! That was late August, and I had started querying mid-July. Things had gone faster than I could ever have imagined.

Now I had to make a difficult choice between two agents. I knew I would be in good hands with either, but I chose Stephanie, maybe because she was more critical. Oddly, it made me feel more comfortable. I called the first agent, who was very gracious. I asked her to wish me luck in my search for a publisher, she said: "Oh, you’ll have no trouble at all finding one."

It was again wonderful to hear, and very kind of her to say so, but I had my own doubts. Stephanie told me she would not submit my manuscript until she felt it was at its best. She suggested that I cut fifty or so pages from the beginning. It was tough to get rid of scenes I loved, but I knew she was right. Once I was done, I realized that the pacing was faster, tenser, better.

The moment of truth had come. It was mid-November and Stephanie had sent the manuscript to a list of editors. Then things went very fast. Within days we had an offer from one major publisher. The advance was several times what I would have expected before I got an agent, but Stephanie told me that it was too early in the game to accept. She was right: two more publishers made offers. I let Stephanie handle the bidding. She called me at least once a day with updates, and every time the amount of the advance went up.

Finally Stephanie told me she did not think that the bidding would go any higher, and that it was time for me to choose one of the three publishers. They all offered about the same money, so Stephanie advised me to talk to all three editors over the phone and make my decision based on my gut feeling.

So that night I spoke with those editors. One of them was a little late calling me, so I began to worry and telephoned Stephanie. She told me that she had just talked to that lady in question. That editor was nervous and gathering her thoughts before talking to me. Imagine that: an editor at a major publishing house was nervous before talking to me, a totally unknown, unpublished writer.

What made me choose Dutton? My conversation with Julie Doughty, the editor there. Julie sounded enthusiastic, funny, feisty, experienced and knowledgeable too. Also Dutton offered a two-book deal, based on the first two pages of my second novel and a one-paragraph synopsis. Not only did they believe in Mistress of the Revolution, they also believed in me as a writer. I was impressed by that level of trust and decided for Dutton. My head was spinning when I hung up.

At the time my son and I had moved in with my Mom following my father’s death and my divorce. It was night, just after dinner. I returned to the kitchen and helped clean up the dishes while I was telling my Mom and son of my conversations with and my decision to go with Dutton.

My Mom remarked on how completely my life had turned around over the pas few months and how blessed I had been in everything I had undertaken lately. She made a big pot of herb tea and we all went back to the dining table, talking quietly about the future.

So no champagne? Not until a few days later. That night the news had made us dizzy enough.