Julie James and the Art of Interviewing

I saw Julie James make a reference to interviewing different individuals for her books. It struck me as something I hadn’t heard of before even though I am sure that other authors have undertaken this task.  You often see thanks to various individuals in the acknowledgments but I’ve never seen any one write about the interview process.  Often readers forget that no matter what the genre is research is an important component of writing. I asked Julie James if she would write an article about her interviews and she agreed. You can find out more about Julie James books at her website: http://juliejames.com/

I remember being asked, after the release of my first two books, if it was fun to write about lawyers since I am a lawyer.  In both of those books, the main characters were civil litigators at large firms, just as I had been.  And in response to that question, I used to say, rather enthusiastically, “Yes! Because it means I don’t have to do any research!” With my third book, Something About You, I decided to branch out into the world of criminal law.  The book features a heroine who is an Assistant U.S. Attorney and a hero who’s an FBI agent.  When it came time to write the first scene at the heroine’s workplace, I realized that I was kind of . . . well, faking it.  In law school, I’d taken several criminal law/procedure courses, and afterward I’d clerked for a federal appellate judge, so I was familiar with the types of cases federal prosecutors handled.  But I didn’t know the daily minutiae of that world as well as I had known the law firm environment depicted in my prior two books.

Luckily, a law school friend of mine is an Assistant U.S. Attorney, so I asked if I could interview him for the book.  I think he’d braced himself for some sort of in-depth, investigative journalist-type interview, but instead I asked him questions like: “How many other lawyers do you share a secretary with?” and “When you meet with FBI agents, do you go to their office, or do they come to yours?”  It was the little details I was after, those things that would make the scenes in my book feel more authentic.

On top of adding authenticity, I’ve found that doing interviews can inspire new ideas.  For example, in A Lot Like Love, the heroine owns a wine store, so I asked the owner of my local wine shop if I could interview her and shadow her for a day.  In addition to becoming more familiar with her daily routine and picking up great anecdotes, I learned that the store had a panic button underneath the main bar that connects directly to the police department—a detail I used in the climax of the book.

To date, the most substantial research I’ve done for a book was for my current release, About That Night.  This is my third book set in the world of the Chicago FBI and U.S. Attorney offices, and when plotting the story it occurred to me how helpful it would be if I could actually see the offices I was writing about.  Unfortunately, I didn’t know any FBI agents.  So instead, I simply looked up the phone number for the Chicago field office and cold-called the Special Agent who handles media inquiries.  I explained that I was a local author writing a series about Chicago FBI agents and asked if I could have a tour of the office.  Of course, I fully expected him to say no, but figured there was no harm in asking.

Actually, his exact response was, “Sure! When do you want to come in?”

Emboldened after that, I called the Chicago U.S. Attorney’s office and asked if I could take a tour of their offices, too.  The media rep there was more cautious at first, and asked several questions about what I wrote and what kind of information I was looking for, but in the end he very kindly agreed to give me a tour as well. 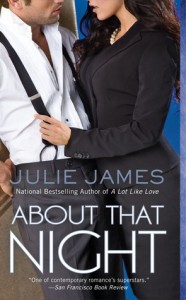 Now, this is the part where I could spend a long, long time talking about how incredibly gracious both the FBI and U.S. Attorney media representatives were during those tours—I saw the command room, toured a bank robbery floor, had an interview with the First Assistant U.S. Attorney (the second in command at the office), toured press rooms, met with division heads, and filled an entire notebook with everything I learned—but since this article is not titled “Julie James’s Ode to the FBI and U.S. Attorney’s Offices—aka ‘It’s an Interview Room, Not an Interrogation Room,’” I’ll simply say this instead:

None of it would’ve happened if I hadn’t asked.

Just recently, for the book I’m currently writing, I interviewed the former General Counsel (now CEO) of a major restaurant/sports & entertainment corporation.  I’d known that I was aiming high with that request, but figured, heck, it couldn’t hurt to ask.  After all, the worst someone can tell you is no.

I’ve refined my interview technique, and now I ask about more than just the environmental details. The heroine in About That Night is another Assistant U.S. Attorney, and since being a federal prosecutor is such a large part of who she is, I wanted to really get to know her world.  So, I re-interviewed my AUSA friend, and also interviewed another AUSA who used to work at my former law firm.  This time, I asked questions like, “What’s a really bad day for you?” “What’s a good day?” “What’s the moment in your career that you’re most proud of?” “What are some of the most memorable cases you’ve worked on?”  I’d like to think that having a better understanding of my character’s environment, goals, and ambitions makes the world that I’ve created in the book seem all that more real.

Bottom line: no one will ever criticize your writing for getting something “too right.” Talking to someone who’s walked in the shoes of your characters can provide you with a wealth of information that will make your story that much richer.  Generally speaking, I’ve found that people like talking to authors.  And if they don’t?

The worst they can say is no.

→ Jane
Previous article: REVIEW: About That Night by Julie James
Next Post: REVIEW: The Duke’s Perfect Wife by Jennifer Ashley