Deb Werksman met Grace Burrowes at the Washington Writers’ Retreat. Werksman had a few minutes between appointments and said “tell me about your books” as she does to every author she meets. Grace shared that she had written 19 unpublished manuscripts, all regency romances. The stories were written about the Duke of Moreland and his 8 surviving children. He is obsessed with the succession is pushing his three surviving sons to marry and have legitimate offspring.

She is a lawyer who specializes in family law, particularly in abuse. She also has a degree in music, grew up on a farm and owns horses. 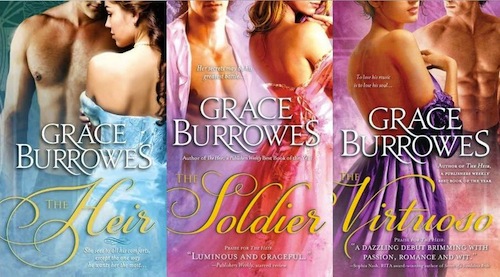 Deb asked for Grace to send Deb 3-4 of the manuscripts. Grace sent 4. Each one of the stories had something good about them but Deb felt she couldn’t bring them to market until she read the 4th one, which turns out to be “The Soldier.

Deb then called Grace and says “send me four more.” In the next 4, she found “The Heir” and “The Virtuoso.” These stories comprise the three sons of the Duke of Moreland. With the hook, Deb returned to the editorial department and was able to sell the series as “The Duke’s Obsession.

They have signed her for nine books. The next three stories will be about the sisters beginning with the October release of “Lady Sophie’s Christmas Wish.”

The Heir was released in December and was initially passed on by Walmart, but after the PW award naming “The Heir” as the historical romance of the year and armed with other positive reviews, the sales team repitched the book and Walmart picked it up in March. “The Heir” went on to achieve New York Times bestselling status in May, nearly 6 months after its original release.

The are going to be discounting all of Heyer’s books to $1.99 for Heyer’s birthday.

Sourcebooks will also be updating existing published books with buy links for other connected series books and other information for the reader.

I asked Deb and Leah Hultenschmidt what they were looking for and Deb said “fresh” stories. Freshness can be as simple as a different locale. For example, they have three cowboy authors. Carolyn Brown’s books are set in Oklahoma and Texas. Joanne Kennedy stories are in Wyoming, big sky country. CH Amarand’s books take place in small town in ranch country.

Deb is looking for

Leah is looking for

I asked whether Sourcebooks is going to do a digital first publishing line and Dominique Raccah, the owner of Sourcebooks said that “when the right model comes to her.”

Raccah also said that the new publishing environment allows publishers to get information directly from the readers from everything from what covers they should use to the titles to a purchasing problem. The interchange with readers is a powerful tool for publishers.

Sourcebooks usually develop 17 cover concepts for each book so that they arrive at exactly the right cover for the book. Deb admitted that some books have had 190 titles attached to them before arriving at the right one.