Carrie Feron is the Editorial Director at Avon.  Avon publishes approximately eight original print romances and four digital-first titles each month .  Morrow Trade is a companion line that publishes a mix of women’s fiction and romance.  Avon Impulse is the digital first arm of Avon.  The same team that works on Avon books, including the editorial, production and marketing staff, work on Avon Impulse books.

The original thought was that Avon Impulse would be primarily unknown authors but their existing authors have been incredibly interested in pursuing this line.  About 1/3 to 1/2 are existing Avon authors. 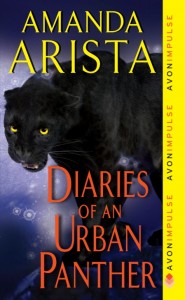 The first non Avon author to be published by Avon Impulse is Amanda Arista whose title “Diaries of an Urban Panther” will be out on July 5, 2011.

The first slush pile find from the Avon Impulse inbox is (still untitled) an original romantic suspense, in the style of Alias or Femme Nikita, written by Carla Swafford, and will be published on 10/25/11.

Another non Avon author to join the Avon Impulse line is Lena Diaz writing the romantic suspense / thriller, “He Kills Me, He Kills Me Not,” on-sale 8/9/11.

Price for the Avon Impulse line is pretty fluid.  No one knows the right price and they are experimenting with pricing and books.  The goal is to keep the impulse books under the $5.00 price.  Amanda Arista’s book, Diaries of an Urban Panther, sells for $3.99.

I asked Carrie Feron what she looks for in a book and she said a “strong voice” which she describes as knowing exactly who that author is when she reads the first page.  “If you have a strong enough voice, you can make your own niche,” said Feron.

Lori Wilde is doing a new sub genre in that her next series contemporary westerns and Rachel Gibson is moving toward military war heroes and  away from hockey heroes.  They are republishing the Lisa Marie Rice Navy Seals and Delta Force books in mass market.

Feron stated that she sees a lot of Regency submissions but that they are always looking for something that hasn’t been done before.  Feron cited her purchase of a Nigerian poet as evidence of her desire for the unusual.  Feron believes that there are a lot of jaded readers out there and that she is looking for new spins on old themes.  She feels that a lot of authors self censor too much.

Feron is excited about the Loretta Chase series.  The next release features three sisters who are dressmakers, and the story takes place partly in Paris.  (We at Dear Author really adored Loretta Chase’s Silk is for Seduction but then we are well known for our love of La Chase)