Debut Print Book: What Happens in Scotland by Jennifer McQuiston 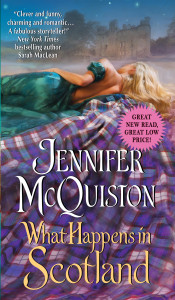 Name of debut release: What Happens in Scotland

2 sentence summary: When recent widow Georgette Thorold wakes up in a Scottish inn with a wedding ring on her finger and lacking all memory of how she came to be there, she does what any well-bred lady with a modicum of sense and a distrust of marriage would do: she panics, clocks the wickedly handsome stranger in her bed over the head with a chamber pot, and runs. James McKenzie can’t remember either, but by outward appearances he has either spent the evening protecting a very naïve, and—dare he say it—very drunk young lady from the advances of every disreputable character in the town of Moraig, or he has married a pretty, scheming thief.

The only question is was it a night worth remembering… or a mistake they would rather forget?

Characters:Lady Georgette Thorold: Prim and proper widow who is just coming out of mourning after a disastrous first marriage. Appalled to wake up in bed with a handsome rake she doesn’t remember, Georgette does the only sensible thing: she runs for it. Only later does she realize that she must track him down and procure a proper annulment… or risk losing her independence to a man she doesn’t know.

James MacKenzie, Esquire: Local solicitor in the Scottish town of Moraig, second son, and man with a past. He can’t remember what happened the night before, either. All he knows is his money is missing and everyone is talking about the beautiful woman who coshed him over the head with a chamber pot… and who might very well be his new bride.

What makes this story different: This is your typical, Vegas-style “she woke up married” story… only it is set in 1842 Scotland. Could it really have happened? The marriage laws of the time make it possible, even if it seems implausible.

The story is a mad-paced romp that is structured a bit differently than many traditional historical romances. The entire plot unfolds over a period of just over 24 hours, and focuses on uncovering exactly what happened during a forgotten night of debauchery–the challenge, of course, is to make the protagonists convincingly fall in love after such an inauspicious beginning.

Is this a series?: Not named

Why you wrote this book: TThe idea for this book came to me as I was planning my 40th birthday party trip to Vegas last year. It occurred to me that Vegas’s notoriety (particularly the fact you can elope and get married in a chapel by Elvis) was not that different from Scotland during the Regency and Victorian eras. “What Happens in Scotland” was born from that idea, and I wrote it feverishly over a two and a half month period.

Why is this your first published book? How many did you write before? What Happens in Scotland is actually my fifth completed book… I wrote four prior novels before finally getting it right. I am so glad this is the one that will be my debut… I cringe to think about some of those earlier learning experiences! The main problem is that I am trained as a scientist, so I had a lot of the wrong sort of writing education to overcome.

What’s your writing process? I love the free-form process of writing – taking an idea that has hit me like a lightning bolt, tearing out about 100 pages or so, and seeing where the idea wants to go. I am a total “pantser” for the first 100 pages, then loosely plot it out chapter by chapter. For me, the joy in writing comes from the freedom of being able to pursue ideas as they come to me. The few books I have tried to solidly plot fell flat, and several were never finished because I felt all the joy had been sucked out of the writing process. I never know how a book is going to end when I start… and that probably means the reader won’t either.

Your next published book. As yet unnamed, an unrequited love story set in Brighton

The last book you read that you loved. I am reading the most incredible novella right now… Courtney Milan’s A Kiss for Midwinter. I want to shake her for not making this a full length book… I am halfway through it and almost in tears I only have about 15,000 more words to savor.

The last book you read for research. Nineteenth-Century Fashion Detail by Lucy Johnston – it has the most gorgeous photographs of period clothing! This is an area I need a lot of help with… for some reason I can “see” landscape and faces in my mind when I am writing, but the clothing escapes my imagination.

The romance book character you most identify with. Having just read Julie Ann Long’s “I Kissed An Earl”, I felt an almost eery kinship with the heroine, Violet Redmond. She is a girl who is smarter than folks give her credit for… and yet utterly lacking in common senses. Yup. That’s me. And like Violet, I use that lack of common sense to launch myself after things I want… sometimes to the point of hilarity.

You can check out more about Jennifer McQuiston and her books at http://www.jenmcquiston.com 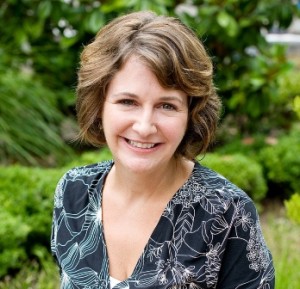