Debut Print Book: The Trouble with Cowboys by Melissa Cutler (and Giveaway)

I’ve had some concerns by readers who are primarily print readers that the coverage at Dear Author has been too focused on ebooks. When I asked the readers what they were interested in seeing, they responded that they would like to know more about print debut authors. We developed a little questionnaire and every Wednesday at 10:00 AM CST (as long as we have content) we’ll post the questionnaire answers along with links to the author’s site and a buy link to her book. I hope this helps people discovery new books.

Melissa is giving away two paperback copies of The Trouble with Cowboys (anywhere The Book Depository will ship).  Leave a comment to be entered in  the random giveaway. 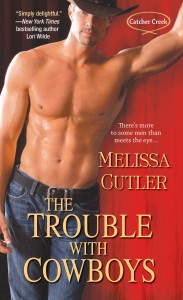 Name of debut release: The Trouble with Cowboys

2 sentence summary: Amy Sorentino, a failed contestant of a televised chef competition show, returns to her hometown to open a restaurant only to find that her key supplier is just the kind of Stetson-tipping bad boy she’s sworn to avoid. But cattle rancher Kellan Reed has a few secrets of his own—and cowboy or not, Amy can’t resist that kind of wild ride.

Characters: Amy Sorentino—who’s holding her head high after her nationally televised meltdown turned her fifteen seconds of fame into a nightmare. This high octane chef has a weakness for cowboys and dicing celery, and a penchant for getting into food fights with her sisters.

Kellan Reed—a cattle rancher with a soft spot for curvy brunettes, a perfectly cooked steak, and cinnamon candles. But when the secrets of his past come rearing up to threaten Amy’s future, he no longer has the luxury to deny the man he really is.

What makes this story different: For one thing, there’s a steamy love scene involving artisanal salts. ‘Nuff said. Okay, sex with salts AND a western romance that shines the light on gourmet food from the field to the table. Catcher Creek is a ranching and farming community that lovingly cultivates its own produce, meat, and dairy, and so the citizens know the value of eating well. From Kellan’s grass-fed beef to his best friends who are goat cheese makers and Amy’s passionate creation of new dishes with local ingredients, this is a book that celebrates good eats grown the right way. Prepare to leave hungry!

Is this a series?: Catcher Creek

Why you wrote this book: Initially, I was intrigued by the labels that television producers assign the participants of reality shows. A person might be painted as the show’s “villain” or “grandma” or “America’s sweetheart”. Remember Boston Rob? Or the “married clowns” on last season’s Amazing Race? Then, throughout the show, their words and actions are edited to fit that label, much in the same way our brains filter our impressions of the people we meet based on the labels we assign them.

I started the book by building a character who’d been burned by her reality TV experience—an “America’s Sweetheart” who’d fallen from grace. And I decided that, being human, she had a (hypocritical) thing for cowboys in the most superficial sense of the word. And I thought, who better to match her wits against in the love department than a real-life cowboy who seemed to fit the label on the surface…until she dug deeper?

Why is this your first published book? How many did you write before? Why, indeed. I’d always known I was a writer at heart, a truth that my family’s also known since I was eight years old and all I asked for from Santa was a dictionary and thesaurus (sometimes I want to go back in time and hug my nerdy self. “Oh, little Melissa, it’s okay that you never take your nose out of a book. Because when you’re older, you can hold your first release up like a big, hot cowboy middle finger to all the kids who teased you.”)

But I somehow got it into my head that the right book idea would someday sprinkle down from the sky like unicorn glitter. Then, six years ago, I had a grand mal seizure and the docs found a brain tumor. And, stupid me, who’d been waiting for unicorn glitter, hadn’t done the one thing in life I’d always dreamed of. After brain surgery ridded me the tumor and the docs gave me the great news that it was benign, and after I was all healed up, I made that first book idea happen by willing it into being.

Fast forward to the present: I’ve been writing romance novels for five years, and THE TROUBLE WITH COWBOYS is my fourth book. The second book I wrote is my upcoming November release, SEDUCTION UNDER FIRE. The third book I wrote is waiting patiently for its time to shine, but I’m confident it’ll have its day in the sun. And the first book, which was really more of a practice novel, will stay tucked under my bed for all times, never to see the light of day.

What’s your writing process? At the risk of revealing my deep writer neurosis, I can’t start writing a book until I know the characters well enough that I can hear their voices in my head. So to get to that point, I spent a lot of time developing my characters’ personalities and back stories. Once I hear them talking, the plot usually falls into place, because to me, the plot serves primarily to bring the characters’ deepest fears and needs to the surface and make them deal with the things that are holding them back. Everlasting love (which should always include mindblowing sex) is the reward for conquering their fears and realizing their true worth.

Your next published book. Seduction Under Fire, a Harlequin Romantic Suspense that launches on October 16th

The last book you read that you loved. . I’ve read a lot of books lately that I like a lot. But loved? That would have to be HER BEST WORST MISTAKE by Sarah Mayberry. I was so sad when it was over (despite the deliciously happy ending). I rarely read books a second time, but I know I’ll need to spend more time with that book soon.

The last book you read for research. The Complete Guide to Horseshoeing, because the hero in my second COWBOY book grew up the son of farriers. And, really, what’s hotter than a man in a leather apron, wielding tools and demonstrating mastery over a horse?

The romance book character you most identify with. Judith Hampton from THE SECRET by Julie Garwood. One of my favorite books of all times. Judith is plucky, book smart, and brave. I love that she sobs all her extra adrenaline out after her feats of bravery. Plus she has the good sense to fall in love with a Highland laird who loves her just the way she is. Score a point for womankind with that choice, Judith! 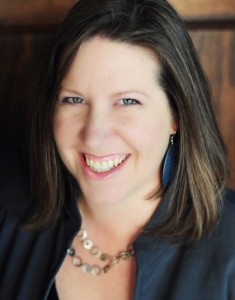 You can check out more about Melissa Cutler and her books at http://www.melissacutler.net

Previous article: REVIEW: Reflected In You by Sylvia Day
Next Post: REVIEW: Ruined by Moonlight by Emma Wildes