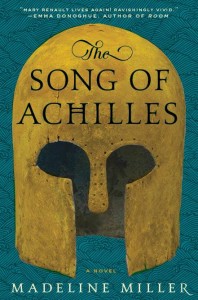 Publisher: Ecco in US, Bloomsbury in UK

2 sentence summary: A retelling of the story of the Greek hero Achilles, narrated by his best friend and lover, Patroclus. Though the novel is romantic, it doesn’t have the expected romantic ending.

Although some of the stories around the Trojan War are well-known, Patroclus’ isn’t.  He’s a very mysterious character in Homer’s Iliad: Achilles’ love for him is one of the poem’s major plot points, yet we see very little of the man himself, or their relationship.  I wanted to write a novel that would explore who he was, and how he came to be so passionately beloved by the greatest hero of the Greeks.

I also felt very strongly about making this book accessible to all readers, whether they knew the Iliad or not.  I didn’t want it to feel like homework, but an invitation into these ancient stories.

Is this a series? If so what book #:
Not a series

Why you wrote this book:

Since I was a child, I have been deeply moved by the attachment between Achilles and Patroclus, and wanted to bring their story to a wider audience. I was also drawn to Patroclus because he is not your typical ancient hero-figure—he seems more interested in healing than fighting, and in the Iliad the slave-girl Briseis calls him “always gentle.” I liked the idea of telling the epic story of the Trojan War from the perspective of someone who isn’t really epic himself.  Patroclus doesn’t seek center-stage, but is pulled there by his love for Achilles.

Why is this your first published book? How many did you write before?
I have been working on this book for the past ten years, so I haven’t had a chance to write any others yet. But hopefully…

Very slow!  I do a lot of editing and re-editing, oftentimes throwing out whole chapters and beginning again.  One of the most helpful things for me as a writer is being able to put work aside for a little while.  When I come back to it, I have more perspective and can see where the structural flaws lie.

Your next published book:

I am just beginning work on an adaptation of the Odyssey focused on the female characters, particularly the witch Circe.  I love writing in Homer’s world, so I am looking forward to exploring it from a different angle.

The last book you read that you loved:

Till We Have Faces, by C. S. Lewis.  A beautifully-written and fascinating version of the love story between Eros and Psyche.

The last book you read for research:

I am currently rereading Ovid’s Metamorphoses, which is one of my favorite of his works.  The poetry is beautiful, and the mythological stories are told with Ovid’s inimitable and sparkling wit.

The romance book character you most identify with:

A hard question!  Does it count to say Eleanor and Marianne Dashwood from Sense and Sensibility? If not, then maybe Peabody from J. D. Robb’s In Death Series. Thanks for participating, Ms. Miller. You can find more about Ms. Miller’s work at her website: http://www.madelinemiller.com/ and a fantastic review of this book at The BookSmugglers.

I loved how The Song of Achilles is ultimately, Patroclus’ plea for Achilles to be not only remembered as the self-centred, egotistical Trojan War hero whose selfish actions were directly responsible for the deaths of thousands of Greeks but also as a wonderful musician, playful mate, someone capable of deep feelings and a devoted companion and lover.

My own plea is that you read this book immediately.