Debut Print Book: Rancher To The Rescue by Jennifer Faye 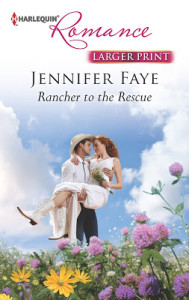 Name of debut release: Rancher To The Rescue

2 sentence summary: When a big, splashy wedding goes awry, the bride, on the run from the paparazzi, is aided by a reluctant rancher. As their attraction grows, they’ll find their future plans are about to be revised in ways neither of them could have ever predicted.

Characters: Cash Sullivan, retired rodeo champion, is glad to be out of the spotlight and away from the probing questions about his past. That is until he meets up with…

Meghan Finnegan, celebrity chef, is a rising television star. So when the hometown girl is about to marry a millionaire, the cameras are rolling. But when she’s jilted at the altar, she finds herself on the run from the paparazzi and at the mercy of a brooding rancher. The last thing she needs is to count on a stranger, but he’s the only means of escape from the baying press.

What makes this story different: Though this is a cowboy romance set in a small own, it has a contemporary element with a celebrity chef and the ensuing press. It’s an emotional read with intriguing characters that have a lot to learn about themselves and each other.

Is this a series?:

Why you wrote this book: Harlequin was holding a Fast Track event where they respond to first chapter submissions by a specific date. It was an opportunity that was too good to pass up. But I wanted something new–something different than my other stories. I wrote three first chapters–all very different stories. I passed them around to trusted individuals and had them vote for the strongest story. It was unanimous. RANCHER TO THE RESCUE won. And thankfully my editor agreed. :-) All I had at that point was one chapter and in no time I had a request for a partial and then a request for the full manuscript. Needless to say I wrote like the wind to finish that book, but it was a labor of love.

Why is this your first published book? How many did you write before? I can’t actually tell you how many manuscripts I wrote before RANCHER TO THE RESCUE. I’d guess it was more than five but less than ten. But there were a number of rewrites on some earlier manuscripts. :-) I believe I sold when the time was right for me and I had enough tools in my writer’s toolbox.

What’s your writing process? When I first started writing I was a total panster. I was certain any story could be fixed with enough rewrites. Yikes! Hence my loss of count on the # of manuscripts written before publishing. Since then I learned to plot a story via a synopsis/detailed outline. It’s a lot easier to revise 10-15 pages than a completed manuscript.

Your next published book. Snowbound With The Soldier ~ October 2013

The last book you read that you loved. At this moment, I’m halfway through Marion Lennox’s SPARKS FLY WITH THE BILLIONAIRE. Marion always spins a great tale and by the second sentence I was hooked. I can only hope to be able to draw in my readers like she does with such warm, engaging characters.

The last book you read for research. Blacktop Cowboys by Ty Phillips. I was warned ahead of time that it was a frank tale about guys written by a guy, but that didn’t stop me from reading it. I laughed. I shook my head. And I rolled my eyes. I really enjoyed the book. In the end, I gained a new respect for contemporary cowboys.

The romance book character you most identify with. I think it would be my current hammer-wielding heroine, Kate. Not the hammer part, though I do like building things if the guys would ever let me. ;-) Kate is facing enormous obstacles, but she won’t give up because she’s independent and a single mom. Being a mom gives me strength when I need it most. I’d do almost anything for my kiddos. :-)

You can check out more about Jennifer Faye and her books at http://www.JenniferFaye.com

Previous article: SBDA Podcast: 51. An Interview with Drs. Joanna Gregson and Jen Lois about the Gendered Community of Romance
Next Post: REVIEW: The Trouble with Being Wicked by Emma Locke