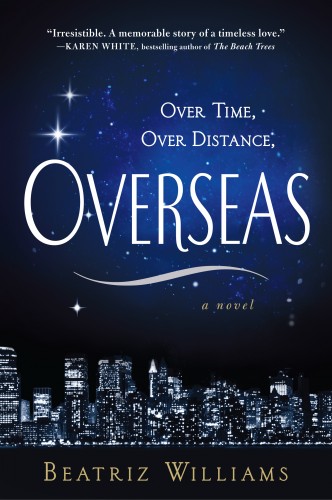 Characters: Julian Ashford is a First World War soldier-poet, in the mold of Rupert Brooke and Julian Grenfell, bred in the prewar romantic tradition and forced to adapt to a postmodern age of irony and cynicism.
Kate Wilson is a determined young Wall Street analyst, disillusioned with her job and with her experience of 21st century courtship.

What makes this story different: Overseas combines the emotional impact of a truly sweeping love story with the unique premise of a book set during the First World War and modern-day Manhattan. The parallel stories — the Armageddon of war, the financial crisis of 2008 — bring out the book’s themes: namely, the vast cultural gulf between the world of a hundred years ago and the world today, and the ways in which crisis tests our true character.

Why you wrote this book: Long before Downton Abbey swept across the landscape, I’ve been fascinated by the first twenty years of the 20th century: a period of enormous social, technological, and artistic upheaval, and yet a time of enormous confidence and optimism for the future. The long Edwardian summer gave rise to a generation of brilliant young men, scholars and athletes who sought the sublime, and who marched off to war in their idealistic thousands. The First World War destroyed both that generation and its sense of purpose, and transformed the romantic outlook into one of irony and cynicism.

I’d always wanted to write about this period, but when the first idea for Overseas formed in my brain, it was a First World War infantry officer walking the streets of contemporary Manhattan. It took some time for me to realize that in Julian and Kate, the woman he loves, I had the makings of a literal clash between the world of 1914 and the world that came after; I could tell this tale in the most compelling way of all: a really great, immersive love story.

Why is this your first published book? How many did you write before? I wrote two other manuscripts before Overseas, both of which were set in the period before the First World War. The first had a compelling story with dull characters; the second had interesting characters but a dull story. I certainly never expected a time travel novel to be my first sale!

What’s your writing process? I used to slog along at a steady pace, but with Overseas, by the time the plot had fully formed in my mind, I was so deeply involved in the story that I could hardly stop writing long enough to sleep and feed my kids! I’ve found that process really works well for me, though it takes a toll physically. I let an idea sit and grow, and once I’m starting to write the scenes in my head, I know it’s time to get the words down. I’ll take six to eight weeks to draft, and then a few more weeks to edit. By that time, ideally, the next idea is taking root.

Your next published book. Set in an exclusive Rhode Island beach community in the summer before the great New England hurricane of 1938. Tentatively titled “A Storm Is Rising.”

The last book you read that you loved. I’m ashamed to say that I only recently discovered Meredith Duran, and spent a wonderful two weeks devouring her backlist. At Your Pleasure was fantastic, a fresh and compelling historical period for the romance genre.

The last book you read for research. I was dissatisfied with my knowledge of Victorian and Edwardian sexual vocabulary, so I went to the source: a memoir called My Secret Life, by the pseudonymous “Walter”, which covers about fifty years (and about 1000 partners) in this gentleman’s single-minded pursuit of tail. A real eye-opener, and as graphic as it gets. Of course, as it turned out, I couldn’t use much of his vocabulary, which would be deeply offensive to the modern female reader!

The romance book character you most identify with. Oh, that’s a tough one! Having recently read and loved Sarah MacLean’s A Rogue By Any Other Name, I found myself really relating to Penelope: we’re both pleasers, which is a tough road to take through life, because you’re always doubting and blaming yourself. At one point I actually found myself choking up, which I almost NEVER do while reading, no matter how moved I am. So it must have hit a nerve! You can check out more about Beatriz Williams and her books at http://www.beatrizwilliams.com