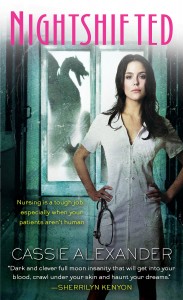 2 sentence summary: When Edie’s heroin-addicted brother overdoses, she’s given a choice at the County Emergency Room: she can watch him die or buy him an unconventional treatment by quitting her current nursing job and transferring to Floor Y4. Nursing school didn’t prepare Edie to work with vampires, werewolves, and zombies, but now she has no choice.

Characters: Edie — the protagonist. She’s new to being a nurse, and that was hard enough before she got transferred to Floor Y4, where all the supernatural creatures in her home town come to hide or heal.

Jake — her brother, who is a long term heroin addict, who she hasn’t written off all the way yet.

Mr. November — a daytime servant of the vampires, and a patient of Edie’s that she accidentally kills, which sends her on a quest to save Anna

Anna — a living vampire, a hundred years old, trapped in a child’s body.

Ti — a zombie firefighter who tries to help Edie in her quest to find Anna.

What makes this story different: I’m actually a nurse in real life, so the medical drama aspects are as real as I can make them without losing track of the story. (This is also why I mostly use a graphic for my author image, as opposed to a real life photo.)

Is this a series?: An Edie Spence Novel

Why you wrote this book: Because a doctor pissed me off.

No, really. It happens a lot when you’re a nightshift nurse, you call up with some information you believe is important, like “Hi, my patient in room three has a hematocrit of two,” and the doctor blows you off. One of my coworkers told me, “It’s okay. No one ever believes nightshift.”

Up until then, I was content to write science fiction and fantasy stories, but at that point in my rage, all I could think was, “He’s going in a book.”

And Nightshifted was born.

More generically than that, as well, it helped me to process some of the things I was dealing with as a new nurse myself. Being a new nurse on a critical care floor is incredibly lonely. Other shifts are mean to you (don’t ask me why, but as they say, nurses eat their young) and your shift coworkers, while helpful, have already been through everything before. So when you’re trying to deal with “Holy shit, I just saw that guy’s _lungs_. Those were _lungs!_” they’re already back at the main desk eating a sandwich, and you feel a little lost about everything.

Writing Nightshifted really helped me get through all of that.

Why is this your first published book? How many did you write before? Nightshifted is my tenth novel, and none of the rest have been published. In my opinion, it’s the one that made it because it had the most voice, and was the most raw, honest, thing I’ve ever done.

What’s your writing process? I write anywhere I can, any time I can. I work nightshift, so my schedule’s almost always messed up, so I’ve learned to write on break, at coffee shops before work, at home awake while everyone else is asleep, etc. I tape ideas I get in the car with a recorder ap on my phone. I usually write flat out until I’ve messed up so much stuff I can’t stand it, edit what I’ve got, and then write some more, wash, rinse, repeat. And while usually I don’t outline, I’m trying to learn how so that I can write faster. I wrote two books in about 14 months last year, I’d like to get faster than that.

The last book you read that you loved. I finished House of Leaves about a month ago, and adored it. Despite my complete inability to personally write them, I really enjoy Mandelbrotesque esoteric digressions, so it was right up my alley.

The last book you read for research. Bitten, by Pamela Nagami MD. I really like her style, and it’s a good overview of anything bad that can bite you.

The romance book character you most identify with. I don’t read much straight romance, but I do read a ton of urban fantasy and PNR. I identify with anyone who does the right thing even when it sucks, especially when they’ve got their own issues to deal with. I really liked Verity Price in Discount Armageddon recently, and I reallly liked Angel Crawford in My Life as a White Trash Zombie.

You can check out more about Cassie Alexander and her books at http://www.cassiealexander.com