2 sentence summary: Cia Allende needs a temporary marriage to access to her inheritance so she can open a women’s shelter. Lucas Wheeler is the perfect man for the job, until he decides the marriage should be anything but temporary.

Characters: Cia Allende is determined to fulfill her mother’s wishes by opening a women’s shelter and needs to access her inheritance to ensure the shelter won’t ever depend on donations to stay in operation. A temporary marriage should be the perfect solution, particularly since Cia has no interest in becoming dependent on a man.

Lucas Wheeler values family and he’s prepared to do anything to erase a recent scandal’s effects on his family business. Cia’s marriage fix seems like a great opportunity, until he digs below Cia’s prickly surface to find the heart of a woman passionate about everything she holds dear.

What makes this story different: This marriage of convenience is contingent on Lucas filing for divorce, or Cia doesn’t gain access to her inheritance. When their relationship turns unexpectedly emotional, they’re both aware a divorce is not only eminent, but critical. And unwanted. The original deal is now the biggest source of conflict.

Is this a series?:

Why you wrote this book: I wanted to write a marriage of convenience story because there’s a lot of room for character growth when a couple is forced into intimate circumstances. These people are sharing a house and a life but plan to stay uninvolved? As a writer, I love turning a character’s expectations upside down!

Why is this your first published book? How many did you write before? I finally got it right! MARRIAGE WITH BENEFITS was my fifth manuscript and caught the attention of editors at Harlequin through their SYTYCW competition. I entered several Harlequin contests previously, and received valuable feedback from editors, which I then applied to MARRIAGE WITH BENEFITS. I’m very grateful for the guidance Harlequin graciously provides to unpublished authors-and continues to provide once they offer a contract!

What’s your writing process? I’m a neurotic plotter. I cannot put the first word on the page until I have a detailed outline and the characters fleshed out. I spend about a week on pre-writing exercises and then about eight-ten weeks on the manuscript. Once my readers and agent provide feedback, I spend another week on revisions and then submit. I’m lucky enough to write as my full-time job, so I work during the day for about four or five hours and spend the evening with my family.

Your next published book. THE THINGS SHE SAYS, releasing from Harlequin Desire in March, 2013

The last book you read that you loved. WAKING UP MARRIED, by Mira Lyn Kelly. She has such a way with dialog and characterization. I couldn’t put it down!

The last book you read for research. I’m reading Michio Kaku’s book, PARALLEL WORLDS, which is a fascinating look at string theory as a way to prove parallel worlds exist. If they do, Kaku speculates about the possibility of traveling between them. If I can get a grasp on the science, I hope to write a story about parallel worlds colliding.

The romance book character you most identify with. I’m kind of like Scarlett O’Hara. I get things done and often not how other people might approach it. She also gets in her own way and causes problems for herself by being so strong-willed. That’s pretty much me in a nutshell.

You can check out more about Kat Cantrell and her books at http://katcantrell.com/ 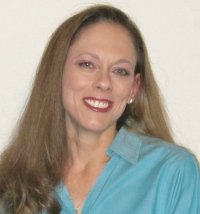 Previous article: REVIEW: American Pie by Margaret St. George (aka Maggie Osborne)
Next Post: Thursday News: I’m running away to join the circus (and the indie bookstores who are suing Amazon should come with me)