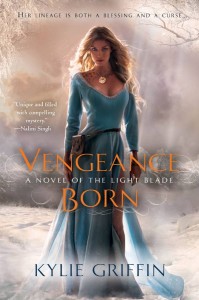 2 sentence summary: A bastard born heroine and warrior hero uncover ancient secrets, struggle with prejudice, and who discover a love that will save three races.

What makes this story different: VENGEANCE BORN is a book that will appeal to both paranormal and fantasy romance readers. There’s a little bit of everything in it for everyone.

For readers who like world building, there’s plenty of those elements in the plot and sub-plots – creatures, paranormal powers, a deity, conflict between races, secrets unveiled and political machinations.

If you want romance, Annika and Kalan struggle against personal prejudices, flaws and other external hurdles to find love.

There’s intrigue and mystery – some twists and turns in the plot will satisfy this craving. Some secrets you may anticipate, others I hope you don’t see coming.

The story isn’t just about the relationship between the hero and heroine but the world the characters live in, and while there are demons, they aren’t the traditional fire and brimstone kind.

As I said, something for everyone!

VENGEANCE BORN is the first book in the Light Blade series.

Why you wrote this book:

It was about a year before I put fingers to keyboard to write Vengeance Born that I saw Annika, the heroine, in exactly the same scene readers discover her in the opening scene of the book – descending into father’s dungeon to meet a human Light Blade warrior for the first time, about to begin her escape and achieve her goal of beginning a new life.

The scene was so vivid I jotted down the details then I played a game of ‘What If…’ to discover her story.

It seems a strange thing to say that I had fun considering the possibilities of a crossbreed child born as the result of a rape. But the idea of a bastard child bred for revenge against an old enemy gave me a huge range of character traits and plot lines to play with.

How would the environment influence her development? Could any one person influence or balance her upbringing? What role would they play? How could they affect her? Which character traits would develop because of her situation? What strengths and weaknesses would she have?

I decided that Annika would have strength and courage backed by a determination to free herself – there would be no waiting around for someone to save her (I love a strong heroine) – but, because of her upbringing, she’d also harbor a flawed sense of worth and need for acceptance.

Her story was one that grabbed me and wouldn’t let go, and so, VENGEANCE BORN came into being…

Why is this your first published book? How many did you write before?

VENGEANCE BORN was discovered by my editor, Leis Pederson, as the result of winning the WHRWA Emily Award (the paranormal & The Best of the Best sections). Critiquing a partial was the prize. Leis liked it enough to request the full, and not long after winning the RWA Golden Heart (paranormal), she made an offer to buy it and the next two in the series.

VENGEANCE BORN is my debut novel but I’ve written and completed another eight manuscripts (all different series) prior to this one. All of them belong to the paranormal romance or science fiction romance genres.

I’m a bit of a linear pantster but since being contracted and with having to submit a few chapters and complete synopsis of the story before I’ve written it, I’ve had to evolve into a linear semi-plotter.

I usually know how I want to start and end a story but everything else in between is fuzzy.

I begin to write, working from Point A to Point Z. I like sticking to a sequence of the events. I can’t write scenes at random and then piece them together.

Then as the story takes shape I see more scenes. Imagine walking through a foggy valley and every so often you come to the crest of a hill and see another in the distance and head for it. That’s how I get through the middle of the story. I just have to make sure the journey takes me to the ending I want. Most times this method works.

The last book you read that you loved:

It was a re-read of THE LONE WARRIOR by Denise Rossett (a fellow Aussie Berkley author). Can’t get enough of this series!

The last book you read for research:

WEAPON: A Visual History of Arms & Armour by R.Holmes – I was looking up the different types of daggers used throughout the ages. I needed a certain type of curved blade for one of my characters.

The romance book character you most identify with:

That’s a tough ask – hmm, OK. This is a bit of a long explanation but it leads into answering your question, so bear with me. *grin*

This might sound rather weird but as a teen I went on a team leadership camp and one of the team building exercises was to let another lead you around camp for half a day while you were blind folded. It was a trust exercise but I found the whole experience of being blind challenging but fun.

In a way, this experience inspired the character of Kymora (who is the heroine in ALLIANCE FORGED). Her disability is offset by her Gift, the power to sense others emotions from auras. She’s had a lot to overcome growing up blind and she’s faced the prejudice of others thinking she’s hampered by her disability.

I really enjoyed writing her as a character – it was a challenge being in her POV and using only her other senses rather than descriptions of the visual. (The team building activity from my teens impacted me so much it was a help with this aspect of Kymora).

Kymora doesn’t see her blindness as a disability. She faces everything that comes at her head on and confronts those who would see her as weak or helpless with such strength.

So, in a way I guess I have been and would be happy to say Kymora’s the character I most identify with as I see obstacles as a challenge rather than as a set back. 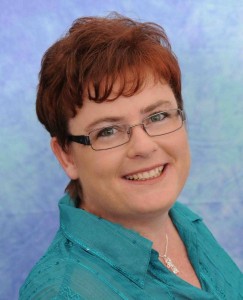 Thanks for participating, Ms. Griffin. You can find more about Ms. Griffin’s work at her website: http://www.kyliegriffin.com.