Debut Print Book: A Most Scandalous Proposal by Ashlyn Macnamara 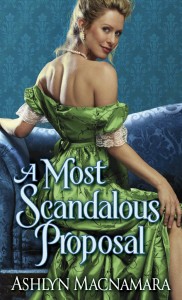 Name of debut release: A Most Scandalous Proposal

2 sentence summary: Two childhood friends in Regency England discover love with the most unlikely of partners: each other.

Characters: My main heroine is Julia St. Claire. She has spent the past few years watching her older sister nurse a fruitless crush while avoiding marriage herself. If she has to marry, she’s determined to do so for sensible reasons. In fact, she gets such an offer. Unfortunately, the offer comes from the man her sister has a crush on.

Benedict Revelstoke is an old childhood friend of Julia’s. He’s recently resigned his commission in the cavalry with the intention of settling in the country and breeding horses. Only he comes to town to purchase bloodstock and while he’s there he finds out Julia’s been made the object of a wager. The notion upsets him a great deal, and he has to warn her off while coming to realize his feelings for her might be more than friendship.

What makes this story different: You can’t really tell from the blurb, but the book contains two romances. I suppose you could call one a secondary romance, but it’s just as important to the plot as the primary romance. You might say Jane Austen’s Sense and Sensiblity influenced this book a great deal.

Also, while this is a Regency, there’s nary a duke in sight. One of the heroes has a title; the other is a second son.

Is this a series?: There’s a tie-in sequel, but there’s no series name.

Why you wrote this book: Because I couldn’t not write it. I had no intention of writing a Regency. I was working on another manuscript when the idea for this one came to me, and it just wouldn’t let me alone until I set the other aside and gave these characters a voice. I still haven’t finished that other one.

What’s your writing process? I’m a pantser. That means I start out with a few characters and an opening situation and I let the characters determine what happens next. I don’t meticulously plan out everything that my characters do. I can’t. They won’t let me. They’re stubborn buggers who take their toys and go home if I try to force them to do what I want.

Your next published book. A Most Devlish Rogue

The last book you read that you loved. The Duchess War by Courtney Milan

The last book you read for research. The Letters of Private Wheeler. It’s a collection of letters written by a soldier during the Napoleonic Wars. They were interesting for the vernacular and little details of soldierly life. I may have borrowed an anecdote or two for Benedict’s backstory.

The romance book character you most identify with. She’s not a romance heroine per se, but Eowyn from Lord Of the Rings. I identify with her unrequited feelings, and I admire her courage. Plus, um, Faramir is hot.

You can check out more about Ashlyn Macnamara and her books at http://ashlynmacnamara.net 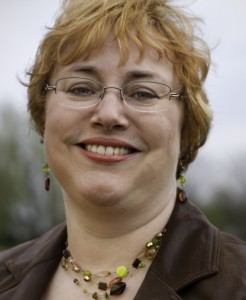 Previous article: REVIEW: Also Known As by Robin Benway
Next Post: REVIEW: The Conquest of Lady Cassandra by Madeline Hunter