I met HP Mallory last year at RT.   I actually sat on a panel with her about reviewing. I came away super impressed with her level headed approach to reviews, her tireless dedication to her fans, and her general outlook on publishing which seemed like every day was an opportunity.  Mallory sold more than one hundred thousand ebooks self publishing a series based on witches and magic and romance.  She was then snapped up by Random House.  Her debut book, Witchful Thinking, came out last month.  Here’s what she has to say: 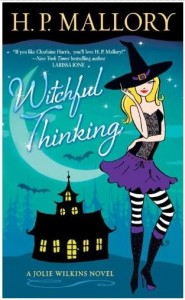 2 sentence summary: Jolie Wilkins has just been crowned Queen of the Underworld. Overwhelmed, under pressure, and longing for love, Jolie decides it’s time to take charge—and show everyone that this queen won’t take jack.

Rand Balfour: the love of her life, from whom Jolie is hiding a devastating secret. Sinjin Sinclair: a darkly seductive vampire and Jolie’s sworn protector—though others suspect he harbors ulterior motives.

It’s campy, funny and really focused on the exploits of a pretty average woman who realizes she’s actually an extremely powerful witch.

Is this a series? If so what book #: 3 but also a standalone.

Why you wrote this book: I started this series because I wanted to write about an average girl in extraordinary circumstances, figuring many women could relate to her.

Why is this your first published book? I self published previously.

How many did you write before? I currently have 6 books available

What’s your writing process? I write a chapter every two days and outline everything beforehand.

Your next published book. The Witch is Back

The last book you read that you loved. The Fever Series by Karen Marie Moning

The romance book character you most identify with. Elizabeth Bennett

Thank you Ms. Mallory.  You can check out more about HP Mallory’s books at her website: http://hpmallory.com/

→ Jane
Previous article: Wednesday Links and Deals: I apologize in advance for the thinning of the wallet
Next Post: REVIEW: Grave Mercy by Robin LaFevers